Never one to shirk an opportunity to show its metrosexual side, ajarn.com received the following e-mail from Gina Gibson.

"I am coming to Thailand at the end of the year and would be grateful if you could advise me as to what's appropriate and inappropriate in terms of women's hairstyles (in relation to teaching posts). I wear my hair short- shaved (a number one on both sides) longer on top and long at the back (imagine a mohican at the back but not sculpted, rather brushed flat). I'm wondering whether I need to change the style slightly? Thanks. Gina."

I've been all over the internet Gina to try and find an image of what a flat mohican with shaved sides would look like and this is the best I can come up with, 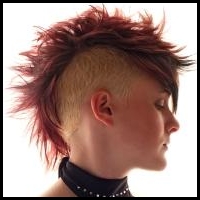 The style above is probably a little more sculpted than how you wear your hair and it's also dyed different colors to give more of a shock value. I'm sure you are more of a 'conservative mohican'

I think I had better hand this over to some of our female readers. Is Gina's hairstyle too weird and whacky for the Thai classroom? If so, what do you think is good advice on how to wear your hair in school? You can put your comments below and / or send any pics to me for inclusion on this page. Come on ladies. Get typing.

Hey Gina,
I dig the look but the question you have to ask is, ‘Is it acceptable for teachers at home to go to work with the same hairstyle?‘. I have a friend who has worked in Thailand for nearly two years now. She has facial piercings and a tattoo. Every morning before she goes to work she removes the piercings and ensures the tattoo is covered. Which is no different from when she worked at home. This is not a question of whether there is differing levels of acceptability between Thailand and the rest of the world. It’s a case of what is acceptable for the profession of teaching.
Good Luck!

Thai students will feel uncomfortable studying with you if you still keep your hairstyle like the one shown in the picture.

Hey Gina,
I dig the look but the question you have to ask is, 'Is it acceptable for teachers at home to go to work with the same hairstyle?'. I have a friend who has worked in Thailand for nearly two years now. She has facial piercings and a tattoo. Every morning before she goes to work she removes the piercings and ensures the tattoo is covered. Which is no different from when she worked at home. This is not a question of whether there is differing levels of acceptability between Thailand and the rest of the world. It's a case of what is acceptable for the profession of teaching.
Good Luck!

I'm a female teacher living in Bangkok and I've been teaching here for 2 years (In the country side and the city). One thing I can say about Thailand is that appearance is an incredibly important part of the culture here... especially for females. When it comes to the workplace conservative is the general rule.

At my last job I was told that I needed to wear my hair back as wearing it down was too 'sexy'... (by the way my hair is straight, mousy brown and only reaches to just past my shoulders). Skirts had to be below the knee (no trousers allowed) and a collared shirt with sleeves (nothing tight or revealing). Other schools will have varying dress standards, but be prepared to follow a dress code that will include instructions about hair, makeup and jewellery.

It sounds like your hair style is a bit different and it will probably get in the way of you securing a good job (eg. pay and conditions) in Thailand. You definitely would not be employed by a private language school, not because of your influence on the kids, but because you would not be portraying the 'high society' image that generally reflects their customer base.

Government schools might be more accommodating depending on who is the director of the school or foreign teacher coordinator. Just remember they might love you and think you're a great teacher, but they are the ones that have to convince the parents and it just might come down to them not wanting to deal with all the fuss (and oh how fussy these insignificant things can get!).

If you're willing to cut your hair short all over then you shouldn't have any issues. But if you don't want to cut it then you just need to be willing to ride out the first couple of months while everyone gets to know you.

The best way to be liked by your Thai boss... always be polite, well spoken and Wai them. Your appearance should always be neat and well groomed. Never openly criticize, always try it their way first and then make polite suggestions. Don't get involved in office gossip or openly bitch about people. Also buying food snacks such as fruit and bread type things are always well received by Thai homeroom teachers.

Just remember don't except any job under 30,000 baht... mohican or not, any less is just insulting.

Hey Gina - coming from a current teachers perspective (male perspective), though appearance is important I don't think your hair is nearly the concern to fret over that the manager at AYC has depicted. The idea that of finding work at 'desperate companies' is a poor suggestion of future possibilities. Yes your hair is 'different' from customary female fashion in Thailand, but having lived in Ayutthaya (a fairly conservative province/city) I think people would adjust. Yes, looks are important and make a strong impression in Thailand, however, how you carry yourself and what you teach is the real deal. You say the picture is more extreme - so it's difficult for me to suggest 'toning it down' however, be reasonable. Yes, the children are impressionable - but part of being a foreigner is exposing the children to alternate perspectives, and that includes fashion.

Well Gina, as a manager of recruitment in Thailand at AYC, of course, i will not allow you teach with a Mohican style hair with my company, still, there are other desperate companies who can hire anything who can walk and talk so you might have a chance still.
But not with serious companies...
One thing you might ask yourself, is it fair for the kids?
Keep in mind that, as you will be a teacher!, those kids you will be teaching take you as a role model and in a couple of days, there will be some small Mohicans running at the school therefore the end of your teaching days will be soon for sure.
It happened before at AYC...
A teacher means a role model as well so what you will do, they will follow with their curious eyes. So, you have to dress well, behave well, act well and as a teacher be a good role model to them.
Do not get me wrong, i like Mohican style hair as well but in a school definitely, right?

We've had a poor response to this so far Gina. It's funny but I've had a number of e-mails from female teachers over the years asking me to do 'teacher dress code articles for women' and answer questions about wear to buy tights and how low to wear skirts, etc - but when I go to the trouble of putting something on the site, very few female teachers want to get involved.

Perhaps everyone prefers to work things out for themselves.

Hi, it isn't a wind up :) My hair doesn't look quite as outrageous at that photo, because I wear it flat on top so it covers a lot of the shaved part. But it is along the right lines :)