Let’s see which you think is right – try this little multiple-choice test:

This is an issue of grammar. To some people, these little differences in the way we construct sentences seem like much ado about nothing. However, I’ve been in staffrooms populated by language teachers who have taken matters such as this very seriously. There have been disagreements that have led to accusations of idiocy, the casting of aspersions, attacks against character, flying fists, spilled blood, death threats, and dagger-laden glares.

First, it’s a sign of erudition and breeding. Poor grammar is a sign of everything that’s wrong with society - people get upset about it. Check out this BBC compilation of irate rants about poor English from 2008, chortle contentedly at the amusing agitation caused by Trumpian English (like the one below from Excalibur News), or revel in the exquisite attack on poor grammar in the Esquire (August 1979) by John Simon, who had this particularly vicious opinion on the ‘between you and I’/‘between you and me’ issue: ‘any halfway self-respecting high school student would sooner have bitten off and swallowed the tip of his pencil than have committed that error.’ Clearly he had strong convictions about the right answer to my multiple-choice question above. 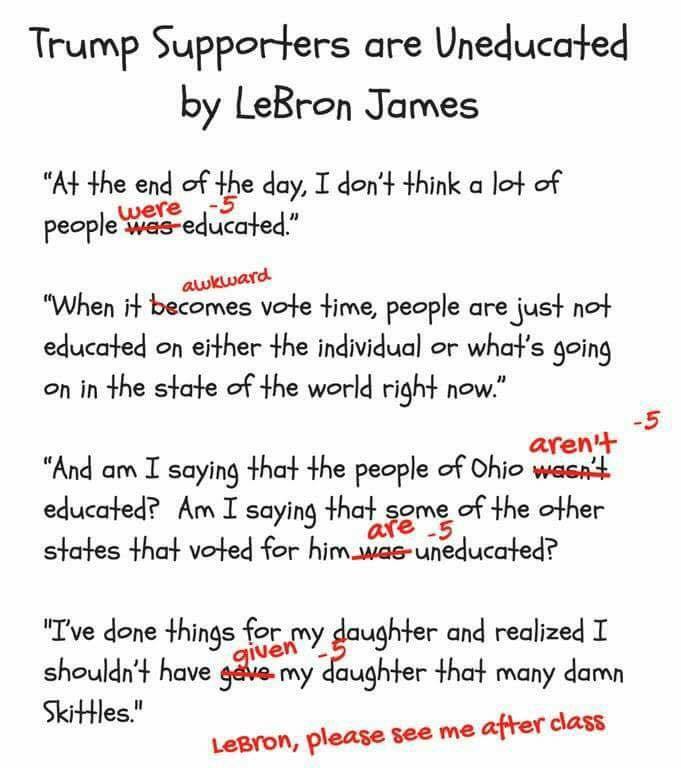 The second reason why grammar is important is that we are English teachers, and so we need to know what is correct and let our students learn it. Who wants to learn English that is wrong? Does any student want to study with a teacher who doesn’t know ‘you and I’ from ‘me and you’?

Since grammar matters, we might have reason to believe that there are rules that should be applied correctly, and that those who break them should be sanctioned in some way.

The laying down and following of rules about the correct use of language is what we call prescriptivism. Prescriptivists see grammar as a series of specific rules that language users like you and I [sic?] need to follow. You’ll hear prescriptivists say things like ‘Don’t start a sentence with a conjunction’ or ‘Never end a sentence with a preposition’ or ‘One oughtn’t split an infinitive’, or even really useful advice like ‘Check that your verb agrees when using third person singular subjects’.

As a child, I remember being told that “if there are two people, you put yourself second” – just a matter of good manners, as in: ‘Mom, can Neville and I go to the park?’ Following this particular rule, it would seem that Jessica Simpson’s ‘between you and I’ has it right with her lyrics. Or does she?

You see, there are some problems with a prescriptivist approach. The first problem is that the ‘rules’ are sometimes overly simplistic and prone to hypercorrection. To illustrate, look at this example: ‘Thanks so much for inviting Troy and I to your class’

As it happens, if we follow prescriptivist rules, this is not right. Can you see why? In this case there is another little rule to follow to decide which form of the pronoun needs to be used: if you take out the named person from the sentence, the remaining pronoun should to be correct:

Mom, can Neville and I go to the park? – the pronoun is correct when Neville is removed!

Thanks so much for inviting Troy and I to your class – oh, that’s not correct, then 😞

All this is interesting, but let’s get back to the band lyrics. To decide which band is correct, there’s yet another rule we need if we are going to be a good prescriptivist. ‘BETWEEN’ is a preposition, and the object of a preposition must be in the objective, or accusative, case and so an indirect pronoun. Wait, don’t stop reading, let me show you:

Cynthia went with I – that’s wrong 😞

Cynthia went with me – that’s correct 😃

See? Interesting, but it’s all getting rather technical and persnickety now. In fact, to be a good prescriptivist you need to have rather a lot of rules at your disposal, right? Anyway, using this particular rule about prepositions, we can see that technically, it should be ‘between you and me’ and so Jessica Simpson isn’t correct.

Now if ‘between you and I’ is technically wrong, why does it sound okay when Jessica Simpson sings it?

This is the second reason why prescriptivism is problematic. When we speak, we don’t consciously follow rules (I mean, do you really go around considering whether your pronouns should be in the accusative case?), and as our language changes (which it does with alarming speed), the ‘rules’ become clumsy and obsolete. For this reason, prescriptivists lose their moral high ground and the tide begins to favor those who think of grammar as a set of conventions rather than a set of rules.

If everyone does something, then that thing is normal. Descriptivists see grammar as a set of norms that we all agree on and use to make meaning with one another – a set of conventions, and as the language changes and the conventions change, our grammar changes too. In fact, to a descriptivist there aren’t really any ‘rules’, there are just patterns that everyone somehow agrees on (except the prescriptivists – they are stuck in the past and hark after elocutionary habitude of yore that was heretofore considered fly).

I feel that descriptivists have a strong case. When grammar vigilantes go around correcting others, what is their authority for doing so? Who is in charge of all these rules and who is to say that the prescriptivists are correct and everyone using the language is incorrect?

The classic example of this is the old ‘Don’t split your infinitives’ rule. According to this rule, we can’t separate ‘to’ from the verb following it. So we can say ‘Sandy seems to like her new house’ but not ‘Sandy seems to really like her new car’. Or maybe more controversially: I plan to totally do my homework. Prescriptivists can gasp in horror as much as they like, but I have no problem with this split infinitive. I tend to repeatedly split my infinitives. When Star Trek announced that they were ‘to boldly go’ in 1966, there was much fretting and fussing by prescriptivists, but now who worries about a split infinitive anymore? In fact, there is evidence that the use of split infinitives is three times more common now than it was in the 1990s.

Back to ‘between you and I’. Whether wrong or not, it’s widely used and it isn’t new. Shakespeare used it in the Merchant of Venice. It appears in works by Graham Greene, was commonly used by Dave Garroway on the Today Show and is a staple of soap-operas everwhere. Take that, prescriptivists! That ‘between you and me’ is technically correct doesn’t make ‘between you and I’ wrong if fellows like Shakespeare and Garroway use it, ya?

Taking a prescriptivist approach to language puts you on tricky ground. English is a complex language that is changing fast. Trying to pin it down with rules just doesn’t seem to work very well, and when a teacher tries it in class things get complex because whatever the rule, there always seems to be some weird and inscrutable exception.

In this paper, researchers looked at the way people use ‘between you and I’, ‘between me and you’ and ‘between you and me’, and found that all three are used, but in different settings in natural language. Which is correct? It seems it depends on who you are, where you are, and what you are trying to achieve with your language. Following this, there isn’t a wrong – only varieties of right.

Want to try this with another example? Let’s go to that all-time favorite English teachers’ staffroom brawl starter: is it ‘half the population is’ or ‘half the population are’? We can resort to the complicated rules on uncountable nouns with fractions (and be prescriptive), or look at what is commonly used by the people who use the language (and be descriptive)! 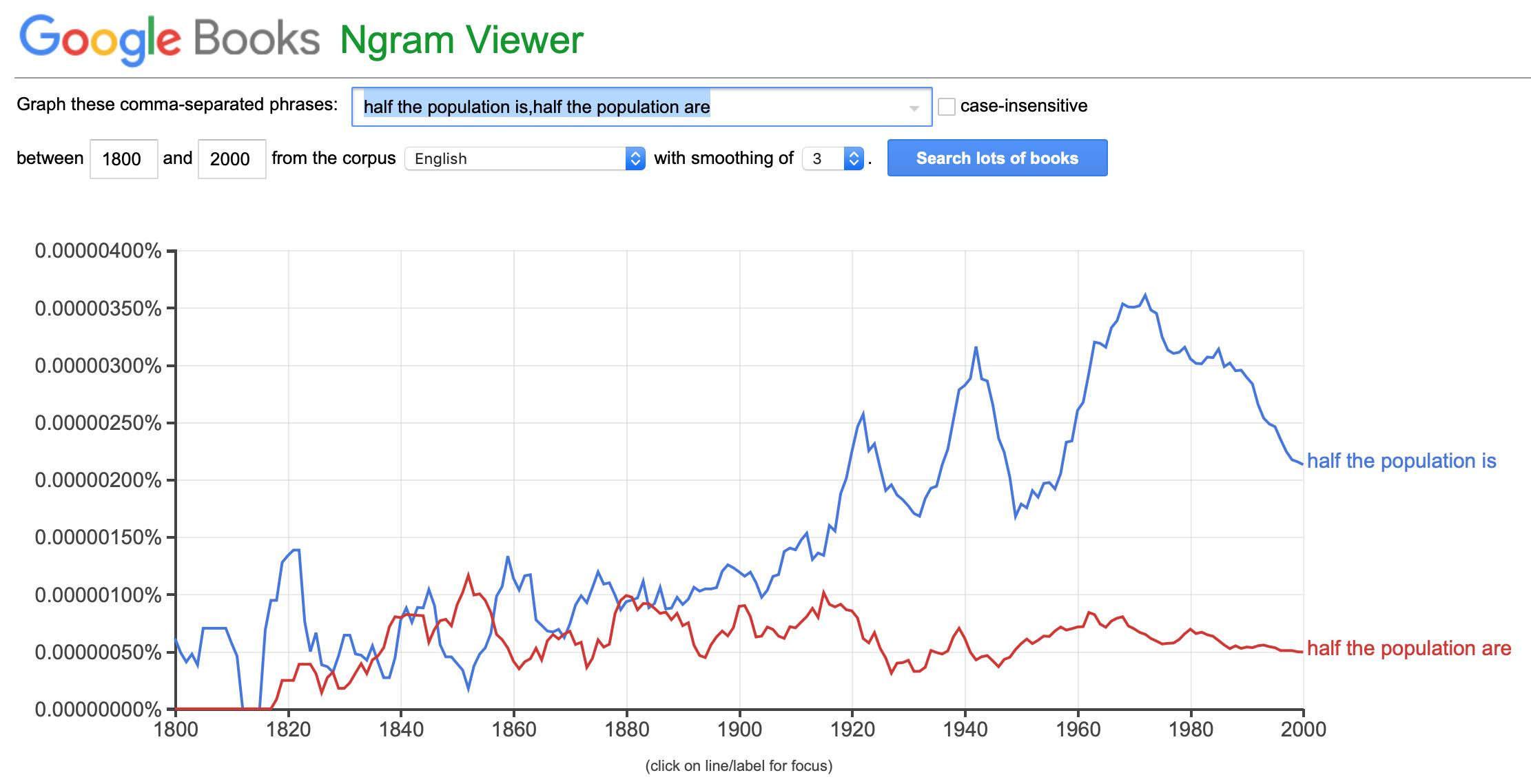 If you can’t remember how to use Google Ngram, have a look at this awesome blog.

Grammar is definitely important, however being preoccupied with grammar when learning a language can lead to what in golf is called "paralysis by analysis." A truly solid golf swing takes years to build. To do so successfully, one has to painstakingly build each fundamental into the swing, one at a time, until it becomes second nature. When watching an accomplished golfer, it is obvious he or she is not focused on all of these fundamentals, but rather on visualizing the shot and capturing the feel to pull it off. To use this analogy I see grammar as the fundamentals, and the shot execution as actual communication. With that idea in mind when teaching conversation I focus on one grammar point, review it, and do some very structured drills to reinforce it. After that I move on to a much more communicative activity aimed at augmenting fluency.

Really good read Stephen. I will definitely look at the Ngram Viewer. There is also an important distinction between the spoken and written discourse as well. I would argue that spoken discourse requires less adherence to 'grammar rules' as when observing fluent speakers of english speak, we can notice many examples of 'error'. One of the nice things about English grammar is there is little need for it when trying to communicate orally. This doesn't mean we shouldn't be teaching it of course as there are myriad reasons to do so not least the fact its fun.