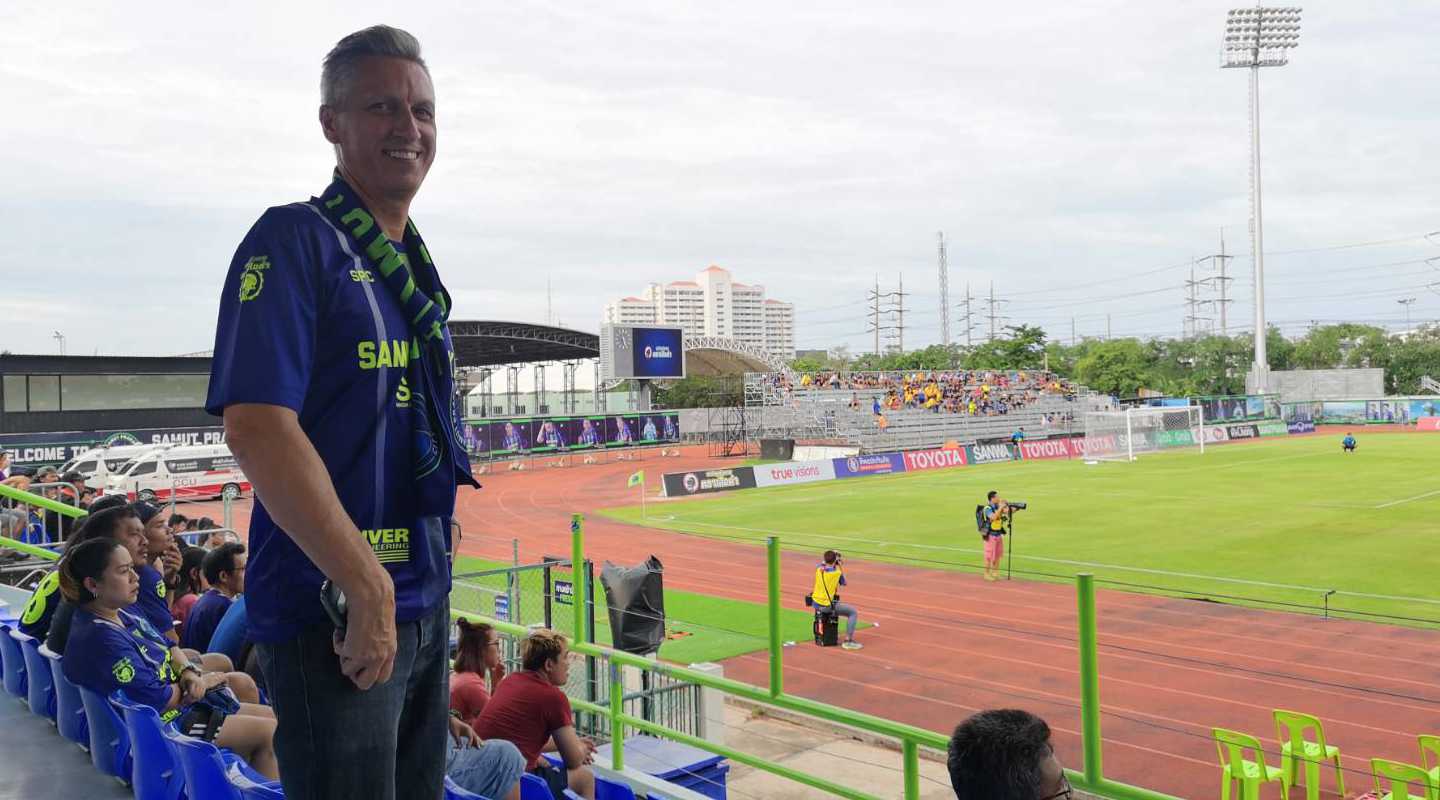 I thought long and hard about flying up to Chiang Mai for our league game last Saturday but just couldn't muster up the enthusiasm. I couldn't face the waiting around at airports and the cramped, single hotel room and the weather forecast was for scattered thunderstorms (no fun if you're stood in an uncovered away end)

This was also Chiang Mai's penultimate game at their 700th Anniversary Stadium before it's closed for renovations and the club has to ground-share with Chiang Rai some four hour's drive away.  With many Chiang Mai fans understandably unhappy about that arrangement and threatening to boycott the game, it was sure to be a flat atmosphere and a sparse crowd - so I decided to stay at home.  Watching the game on TV felt strange as it brought an end to my run of 10 consecutive home and away games.

It didn't turn out to be a bad decision though. It wasn't Samut Prakan's best performance of the season and twice we had to come from behind to earn a point in a 2-2 draw. And it poured down with rain for most of the second half! (Match highlights) 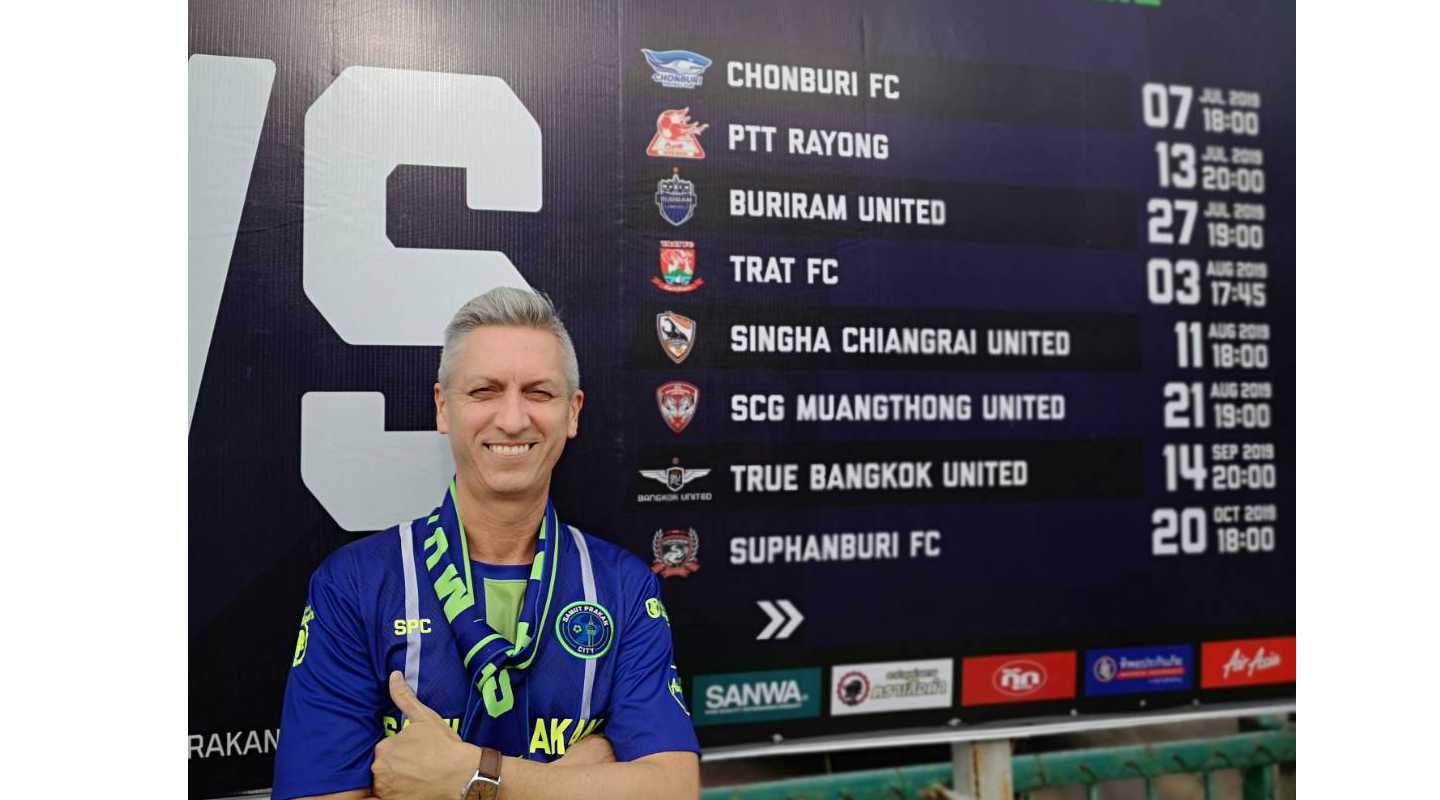 So who are we welcoming to Bang Plee this evening?

It's a local derby against Chonburi FC.  A warm welcome to any of their supporters who have made the hour's journey by road.

Chonburi were our first opponents on the road back in early March and Samut Prakan came away with all three points. Ibson Melo got his season off and running, scoring both goals in a 2-0 win.  I'd be well happy with a repeat of that scoreline this evening - and so would Ibson Melo I bet!

How has Chonburi's season been so far?

The Sharks started the season with high hopes but have had a disappointing campaign, spending much of it in the bottom half of the table.

After taking just one point from their opening four games, Chonburi felt like a club in crisis but things started to look up with a 3-2 victory at home to Prachuap and a terrific 4-2 win away at Bangkok United (not many saw that result coming) However, since then they've been the very definition of inconsistency. Their last five away games have yielded just one point - courtesy of a goalless draw at Sukhothai.  However, they haven't done badly at home. Last weekend they defeated table-toppers Buriram, 1-0 in front of their best crowd of the season.

Could the tide be turning?

They didn't do too well in the domestic cups either?

No, they went out of both competitions at the first hurdle and on both occasions to second division opposition. They crashed out of the FA Cup on penalty kicks at Thai Honda and were beaten 2-1 away at JL Chiang Mai  in The League Cup.

They've been busy in the transfer window?

Yes, they've made a number of new signings. The graphic below, taken from a Thai football website, rather pokes fun at the fact that the new additions are 'getting on a bit' with a combined age of 166, but sometimes you can't beat a few experienced heads in your team line-up. One of the new arrivals is Brazilian striker, Caion, who is on loan from Prachuap, and it was he who scored the winning goal against Buriram to mark a dream debut. We need to keep an eye on that guy this evening. 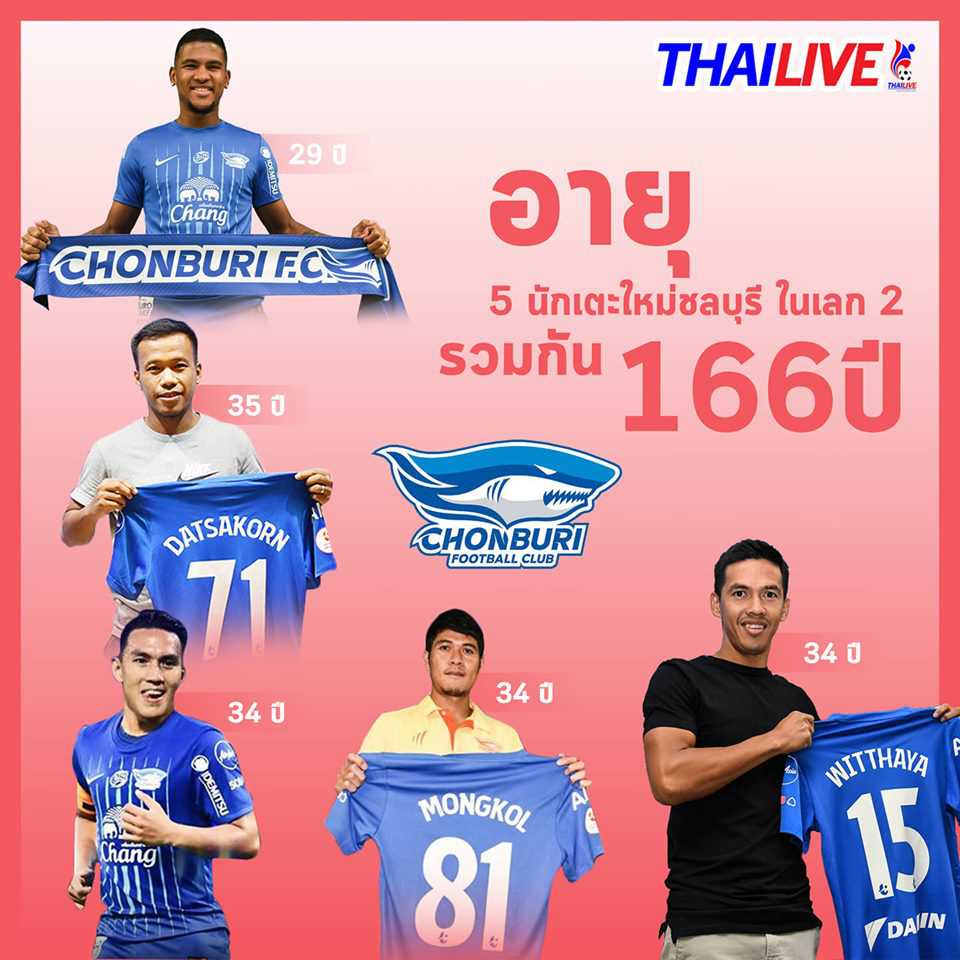 Kim Ho-Yeoung has arrived from Mokpo City FC, who play in the third division of the Korean league system, while Kim Pyung-Rae once played 7 times for Ukranian club, FC Metalurh Zaporizhya, before they went bankrupt. It's exciting stuff this isn't it?

Sadly, our previous Korean star, Kim Tae-yoen, has decided to move on. I thought he was a very decent player and he'll be missed. Good luck Kim. 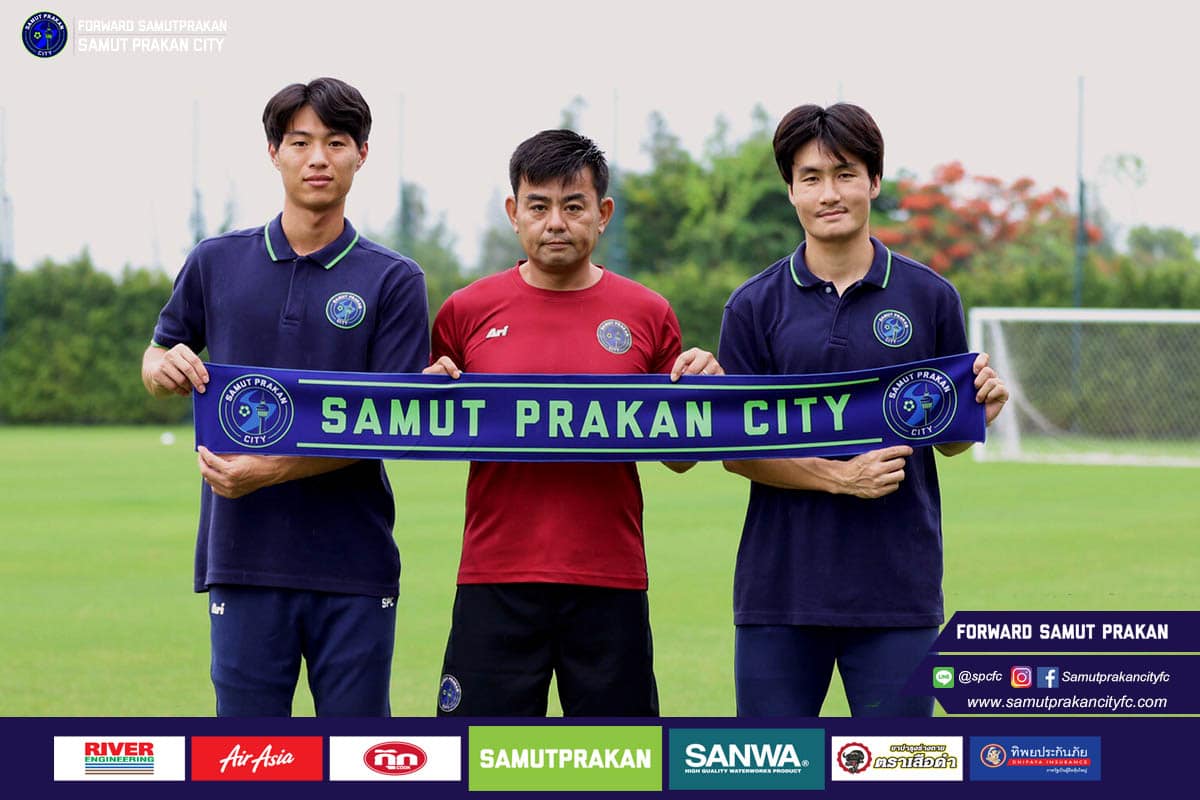 Nothing less than a home win will do this evening against a side who don't travel well. I'll stick my neck out and go for a comfortable 3-1 to keep us right in the mix.

It's shaping up to be an exciting second half of the season?

Let's do this! It feels like it could be a decent attendance tonight?

The fan zone was a hive of activity before the match. There were healthy queues at the ticket desks and the Chonburi fans had turned up in numbers as well, all waving their blue and white flags.  But still I was amazed to hear the announcement in the second half that the attendance had topped 4,500. Wow! Almost a sell out.

The interest in the club is definitely growing. We're getting there slowly.

The match was barely two minutes old when Ibson Melo danced his way into the box and fizzed a shot inches wide of the upright. The tone was set for the first 45 minutes at least.

We lost centre half Aris Zarifovic after just 11 minutes, visibly struggling to shake off the effects of a heavy challenge, it was clear he couldn't continue. In a defensive re-shuffle, one of Samut Prakan's new Korean signings, Kim Pyung-rae took his place. I'm sure he didn't expect to make his debut quite so soon, but the boy did well. He kept things simple.

There are more golden chances as Samut Prakan continued their offensive. Number 11, Jaroensak Wonggorn, who is rapidly becoming one of my favourite players, sends in a cross from the right wing but Teeraphol sidefoots it wide with the goal gaping.

The best chance of the half comes via some breathtaking midfield interplay between Teerapol and Chayawat but after a couple of intricate one-twos, Chayawat can only hold his head in disbelief as his powerful shot cannons off the underside of the crossbar.

Chonburi are offering nothing. They don't even seem to have a game plan other than to give away possession at every opportunity or wang it forward to Brazilian striker, Caion and hope for the best. That isn't going to work. Caion just doesn't have the ability to do anything with it.

Half-time: Samut Prakan 0 Chonburi 0. How on earth are Chonburi still in this match?

There must have been a feeling the goals would come in the second period?

The second half was unfortunately a case of 'after the lord mayor's show'. Not that we took our foot off the gas or that Chonburi played any better, but it was ruined by injuries and lengthy stoppages.

Captain Peeradol limped off in the 69th minute with what looked like a particularly bad knock, to be replaced by Krailas. Then with barely ten minutes remaining, goalkeeper Pathiwat is injured clearing his lines during a rare Chonburi attack and after a lengthy delay for treatment, ends up leaving the stadium in an ambulance.

Samut Prakan's third choice goalkeeper grabs the gloves and suddenly this is beginning to look like a very 'patched up' home side.

The electronic board goes up to signal five minutes of added time and Chonburi can sense going home with a thoroughly undeserved point. But this game isn't over......

93 minutes gone. The brilliant Jaroensak chips the ball forward from midfield to Teerapol, who has time to check, look up and deliver a teasing pass into the box. And there is Chayawat, as cool as you like, to apply the finishing touch and to send the home crowd barmy. The noise is deafening. 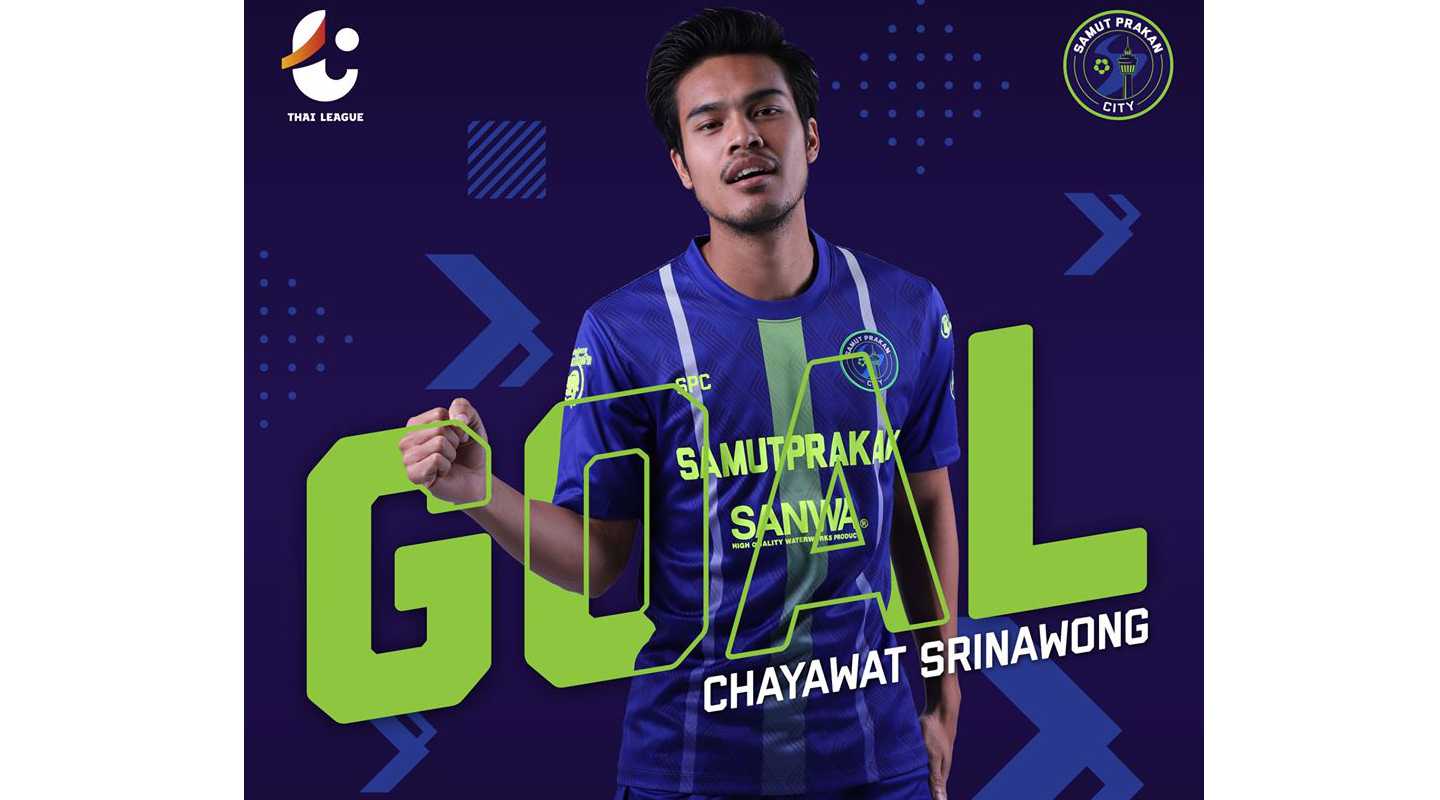 I like Chonburi Football Club and I don't want to come down too hard on them but I think thus far, they have been the worst team to come to Bang Plee this season. The final stats showed that the toothless sharks didn't manage a single attempt on goal in 95 minutes and it would have been a travesty had Samut Prakan not taken all three points.

But enough of all that. I'm checking the results of other matches on the way home and league leaders Buriram have been held to a goalless draw at home to bottom club Suphanburi. It's as if the mighty football gods are conspiring and actually want little Samut Prakan to become Thai League champions.

We are now in second place, just one point behind Buriram.

This is not some impossible dream. There is now a genuine belief among the fans that we can do this. We have a team that's good enough to be champions and we are second in the league because we fully deserve to be there. We also still have Buriram and third-place Bangkok United to play at home. It's almost as if our destiny is in our own hands.

At risk of being labelled a 'part-time supporter', I'm unfortunately going to miss the next three games. I'm not happy about that but sometimes life just gets in the way.  My wife and I are off to Bali for a short break on the 12th July and I'll miss the home league match against PTT Rayong (July 13th) and also the FA Cup round of 16 away at second division Thai Honda (July 17th)

Actually, I did have hopes of making the FA Cup game but we are scheduled to land back in Bangkok at 3.30 pm and the match kicks off at 6.00. If factors combine such as the flight being delayed and/or long immigration queues and/or general travel fatigue, it's just not going to happen.  When I told my wife about the logistical possibility of catching the game on the way home from the airport, she just gave me that look. You know that look, right?

The third match I'll miss is the away fixture at Sukhothai, which is a 10-hour return journey by car or an 80-minute flight. It was never a match that was high on my priority list anyway.

Just out of interest (and on a completely separate note), who's most likely to be promoted from division 2 next season?

Here is the current table showing the top ten sides. It's looking very good for BG Pathum United, who lead the way by a massive 12 points at the moment, but the battle for those second and third promotion places could go right down to the wire.  If Army United and Police Tero are promoted along with BG Pathum, then that would mean three Bangkok-based teams back in the Premier and three very doable away trips.

Only a fool would rule out Sisaket and Lampang though. Bear in mind that Sisaket were stripped of 6 points by the Thai FA earlier in the season. In fact, any of those top ten teams are still in with a shout of being in the top flight next year. 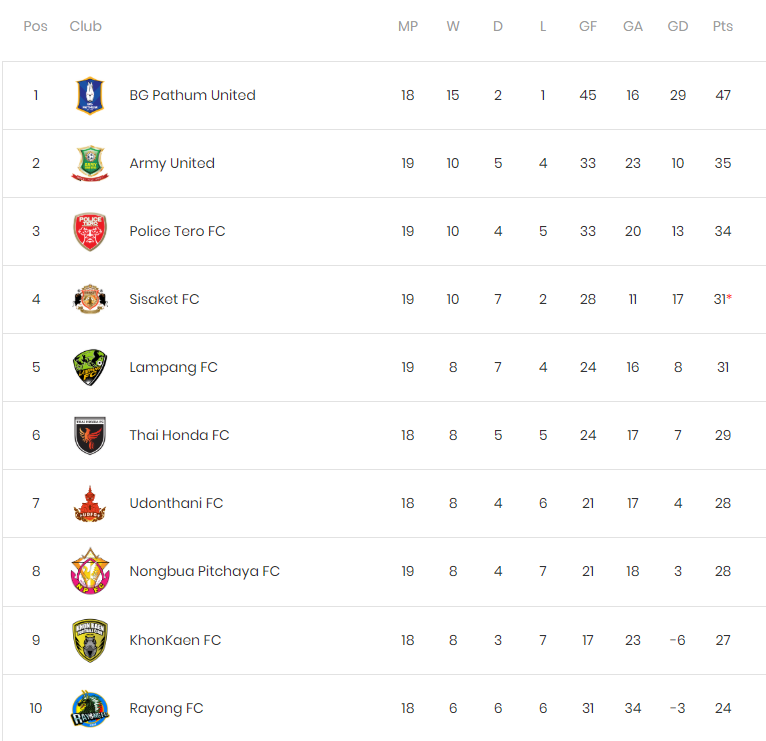