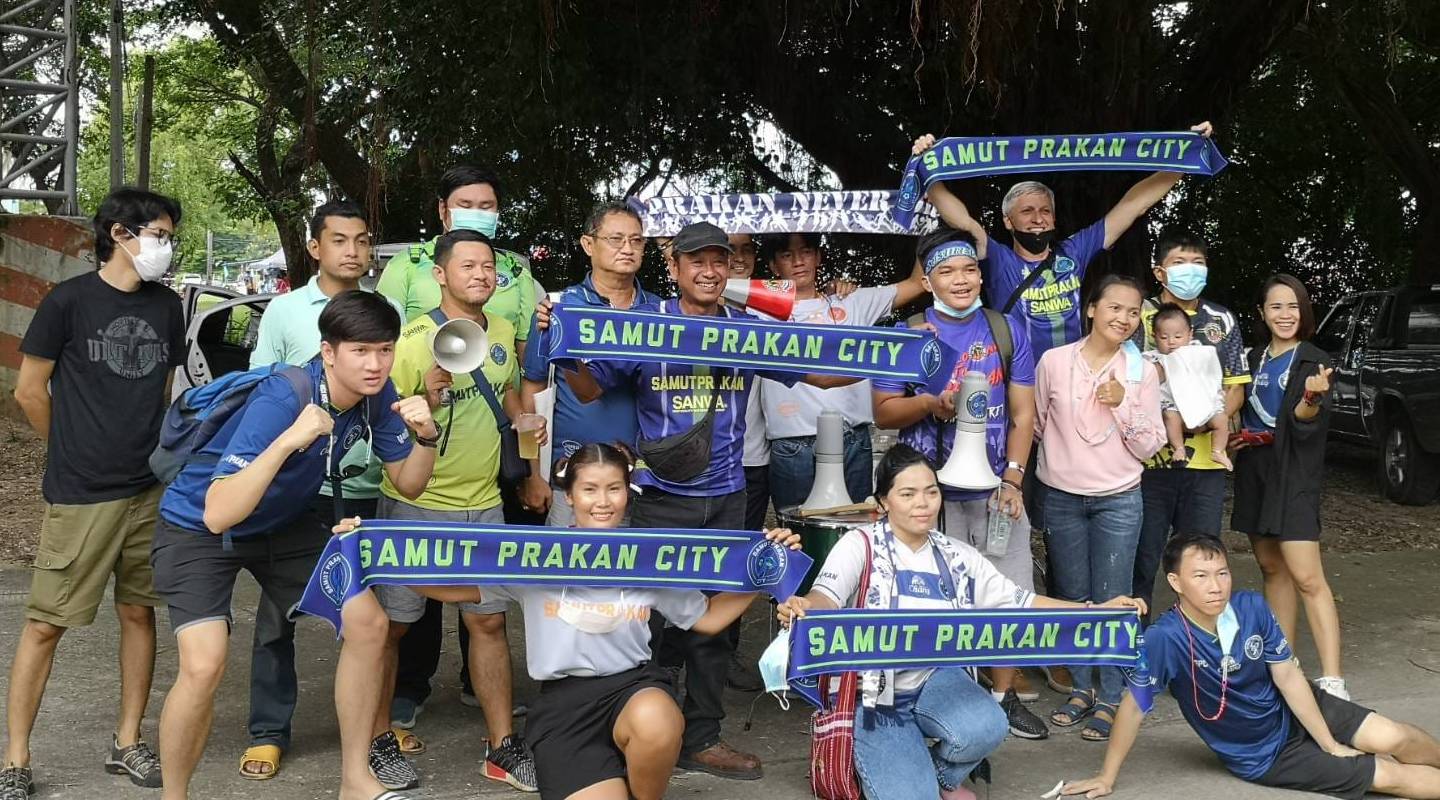 (When we met Uthai Thani back in August, The Elephants were top of the league. They've since slipped to 10th)

Samut Prakan travelled to Chiang Mai FC on December 11th to wrap up the first half of the season. It seems like a lifetime ago because since then, we've had Christmas and New Year, and prior to that, Tun and I went to Vietnam for 10 days.

Anyway, a poor match ended in a 1-1 draw with Samut Prakan grabbing a deserved equaliser late in the contest. You can watch the match highlights here.

So Samut Prakan are in 13th place as we go into the second half of the season. How would you sum up the first half?

Apart from the obvious lack of a goalscorer, I genuinely think we're as good as any team in the division, but scoring goals has undoubtedly been the problem. Only two teams (Ranong and Rayong) have scored fewer. On the flip side only three teams have conceded fewer goals, so I've no problems with the defensive side of things.

Any activity during this transfer window?

Plenty. With slightly more outs than ins it would seem. To the best of my knowledge, NINE players have left the club.

Three players have all dropped down a level to play for Muang Loei FC in the third division - midfielders Decha Sa-ardchom and Nonthaphut Panaimthon, plus defender Sirapop Saardheim.

Midfielder Kriangkrai Pimrat has left for Banbueng (also in the third division). Kriangkrai's departure is actually quite a surprise, having already chalked up a dozen starts for the first team.

Young striker Warakorn Thongbai has joined second division strugglers Krabi FC and fan favourite Sarayut Somphim has moved to leaders Nakhonsi United. Sarayut's departure hardly counts as a loss though because despite being the best player in the squad, he hasn't featured in the team this season due to contractural issues. His leaving was sadly just a matter of when.

As for foreign players, it's almost a total clear out. Nigerian defender Evans Aneni, Moldovan striker Petru Lueca and Brazilian centre-half Renan Costa have all departed. I'm genuinely sorry to see them go as they were all great lads but that can be the cut-throat nature of Thai football. Evans put in some tidy performances once he secured himself a starting place. Unfortunately, we never got to see the best of Renan Costa due to a long-term injury that limited him to just half a dozen games. Petru Lueca was another player who seemed to constantly struggle with injuries.

So who's joined the club?

Kasidit Kalasin featured in five games for Chonburi in the first half of the season and has arrived on loan from our parent club.

Completing the new Thai faces is Akkharadet Yodjumpa, who is better known to Thais as a singer rather than a footballer. Although I've read some glowing comments about his footballing ability, the 35-year-old midfielder is probably a 'novelty signing' to boost Samut Prakan's profile and perhaps address the club's dwindling attendances.

And now for the new foreigners. It looks like we've signed up a couple of African players, Diawara and Toure. Makan Diawara is an attacking centre-half from you guessed it, Rajpracha FC (do they have any players left?) Toure we know little about other than he's from AS Mansa in Mali. However, he played 45 minutes in a recent friendly between Samut Prakan and the Myanmar national team and looked very useful indeed. On the topic of the Myanmar, we have also scooped up Burmese left winger Zon Moe Aung. 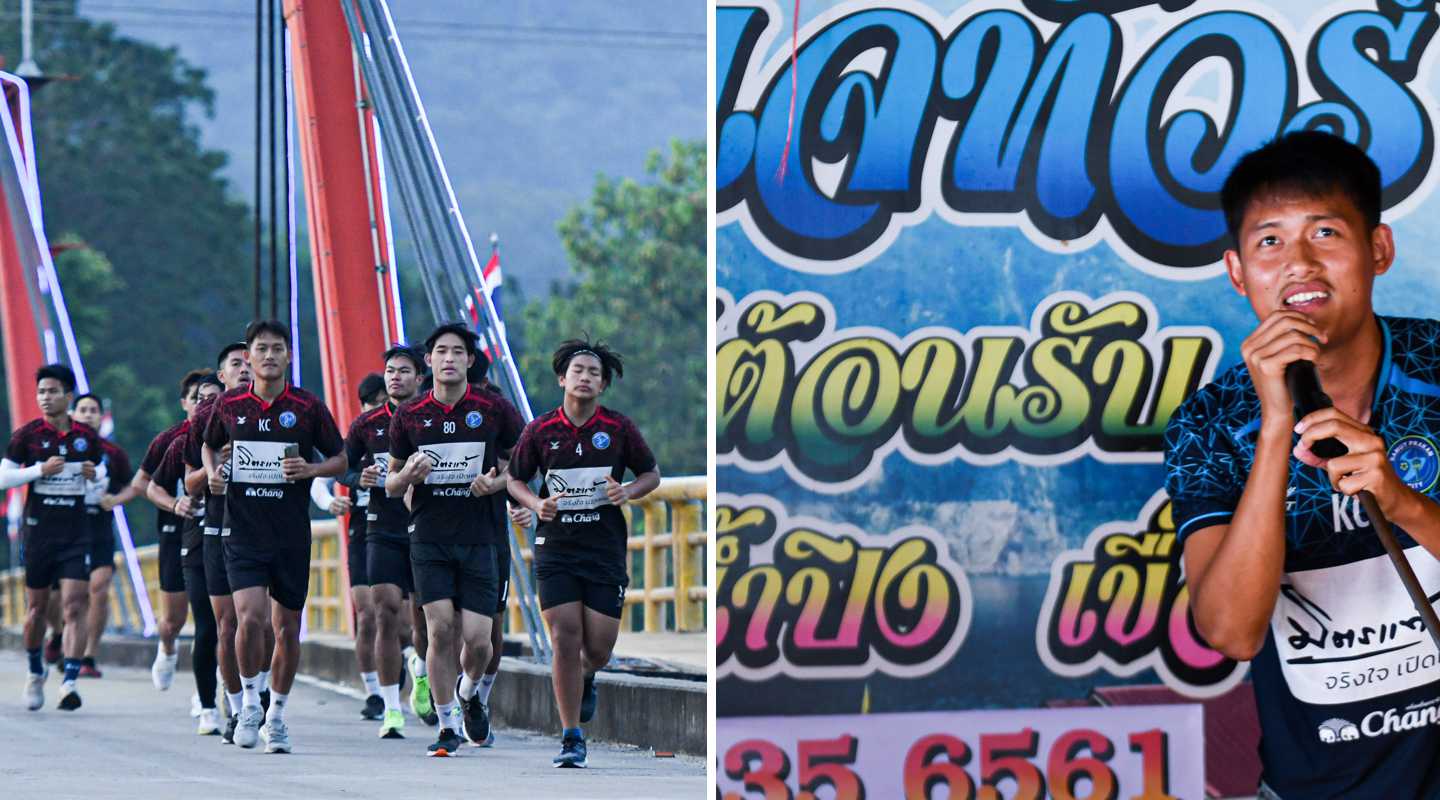 (The Samut Prakan squad prepared for the second half of the season with a training / teambuilding camp in Krabi. Photos: Official Samut Prakan Facebook page)

Let's get to today's opponents Uthai Thani FC. How are they doing?

The Elephants are three places above Samut Prakan in 10th but just two points better off in what's become a very 'congested' mid-table. However, their away record is decent and they've banged in 30 goals this season (double Samut Prakan's tally) They're certainly not a team to be underestimated, plus they spanked Ranong 6-0 in their last game before the mid-season break so confidence should be high.

Who's banging in the goals for them?

Brazilian club captain Ricardo Santos is top scorer with 8 goals and Nigerian midfielder Gafar Durosinmi has chipped in with half a dozen.

The teams met in August for what was Samut Prakan's first away game of the season and fought out a 1-1 draw, Petru Lueca's equaliser just before half-time cancelling out Uthai Thani's early strike.

The travelling Samut Prakan fans were very well looked after by the Uthai Thani hardcore with snacks and free match tickets so we bid them a warm welcome to the SAT Stadium this evening.

I guess much depends on how the new players gel but I'll start the year on an optimistic note and go for a 2-1 home win. 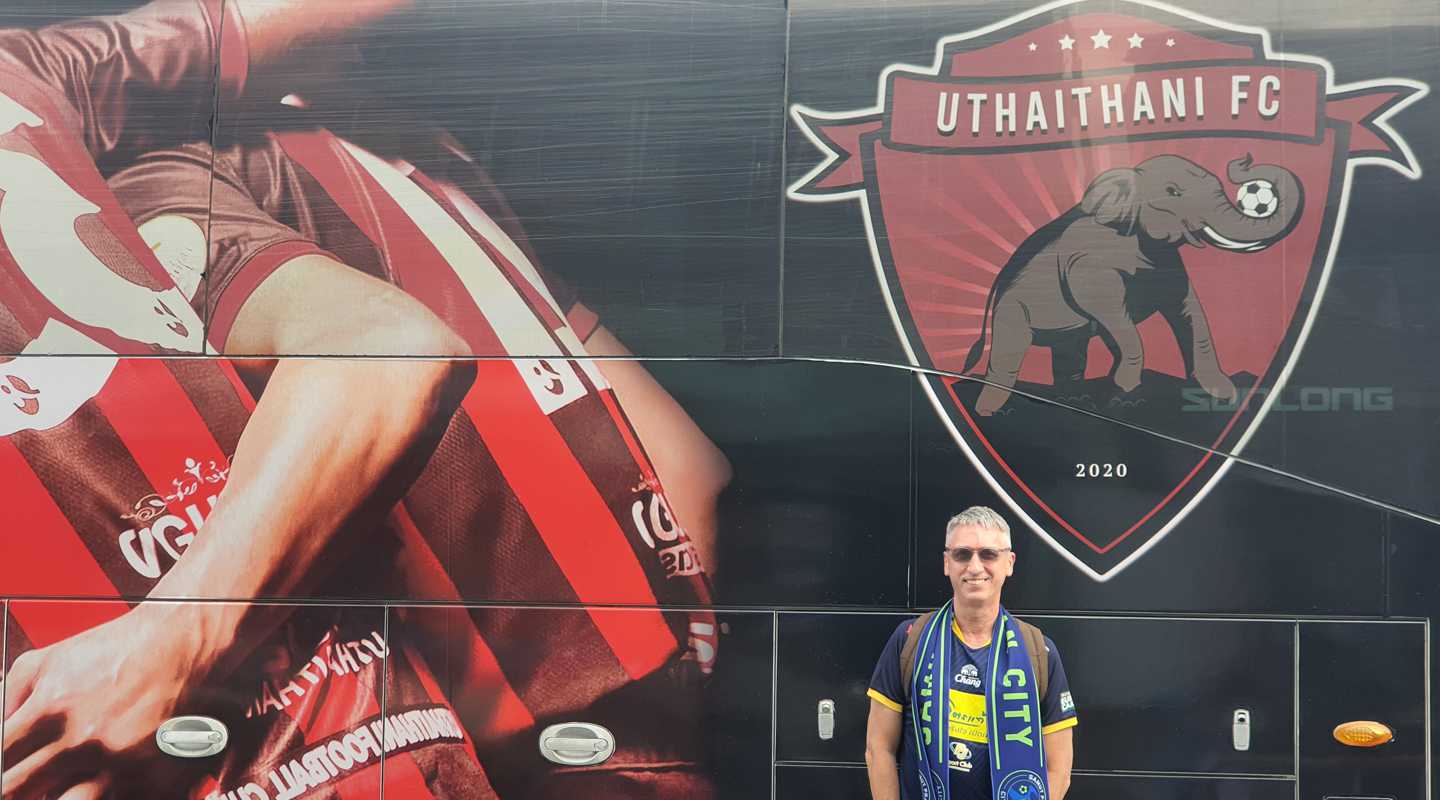 Samut Prakan fans eagerly scanned smartphones in the build-up to kick off to see which of the new arrivals would make the starting eleven. As it transpired, only two new faces would feature from the off, both of them Thai players from Rajpracha FC - Tirapol and Kitikai.

Elsewhere, Karn Jorates made his return from a lengthy absence to wear the number 8 shirt in midfield but surprisingly there was no place in the side for regular captain Sakesit, who sat out his first game of the season. Ratchata Moraksa was given the armband, a just reward for some excellent performances before we went into the international break.

After a sedate opening 25 minutes, the game springs into life as Uthai Thani's danger man Santos is clumsily brought down in full flight by Supawat. The referee points straight to the spot and whips out a yellow card. There's a noticeable absence of protesting on the Samut Prakan keeper's part. As the well-worn line goes - 'a penalty all day long'. All that remains is for the Brazilian centre forward to compose himself, send keeper the wrong way, and put the visitors a goal up in front of their travelling fans.

Samut Prakan try to force a way back into the match but it becomes a familiar story of too much pretty passing football and just not enough end product. Santos turns goal provider on 41 minutes to extend Uthai Thani's lead, picking the ball up smartly on the left touchline and spotting the run of Kittisak. The Uthai midfielder won't score an easier goal all season as he's allowed to dart into the box unchallenged and finish with an easy tap-in.

As home fans make their way to the exit for some half-time refreshment, Samut Prakan are handed a route back into the contest with an extremely soft penalty. Karn Jorates is adjudged to have been bundled down in the penalty area when replays clearly show the goalkeeper got to the ball first and his momentum carried him into the opposing player. But we'll take whatever comes our way and Kitikai tucks away the spot kick for a debut goal.

Karn Jorates made way for the introduction of Panudech during the interval, meaning all three of the Thai signings from Rajpracha got game minutes. The diminutive midfielder with the blue hair was to go on and have an excellent debut. The boy is quality.

Early in the second period, Uthai Thani almost restore their two goal cushion as Brazilian defender Brinner, a new arrival from premier league Lampang FC, sees his header crash against the crossbar and bounce down on to the goal-line. There's no VAR in Championship football to check these matters but despite the vociferous protests from every player in a white shirt, replays show the linesman got this one correct.

Samut Prakan survive the scare and gain control of the game but possession football means nothing if you can't score goals and Ratchata's shot against the post is as close as we come to an equaliser.

At the final whistle, the Samut Prakan players collapse to the ground and are left reflecting on another disappointing result and a frustrating evening of if-onlys. 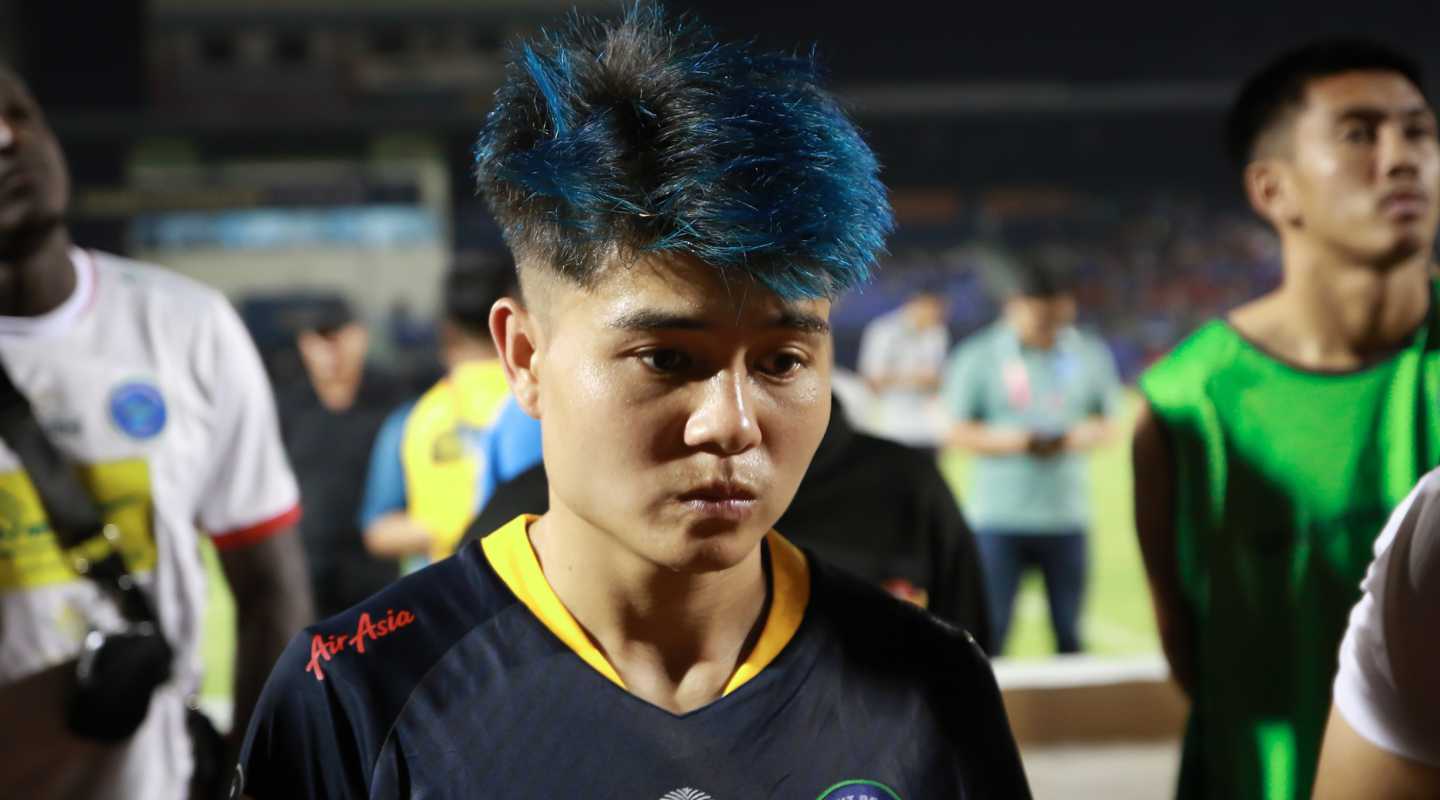 (Despite the glum expression, Panudech's second half performance was undoubtedly one of the game's high points. Photo credit: Bonus Cam)

Once again we are beaten by a side who for 90 minutes looked distinctly average and no better than us, but I can't keep saying this. That's one win in our last 11 league and cup matches. Fact. The pretty passing football is nice to watch but we just don't create enough goalscoring opportunities. We don't have a Ricardo Santos in the team. Big, muscular and foreign, Uthai Thani's talisman was involved in the game's biggest moments, the penalty that led to the opening goal and the assist for Uthai Thani's second. We desperately need a Ricardo Santos.

Could that man be Toure? He didn't even make the Samut Prakan subs bench tonight but he was there at the end of the match, coming over to applaud the hardcore home section with the rest of the players. Whether he's carrying a knock or he's waiting for official league registration I don't know, but in my opinion, we need to get this guy into the team as soon as possible. Let's see what he can bring to the party.

A tough away trip to Suphanburi on Sunday 15th January.