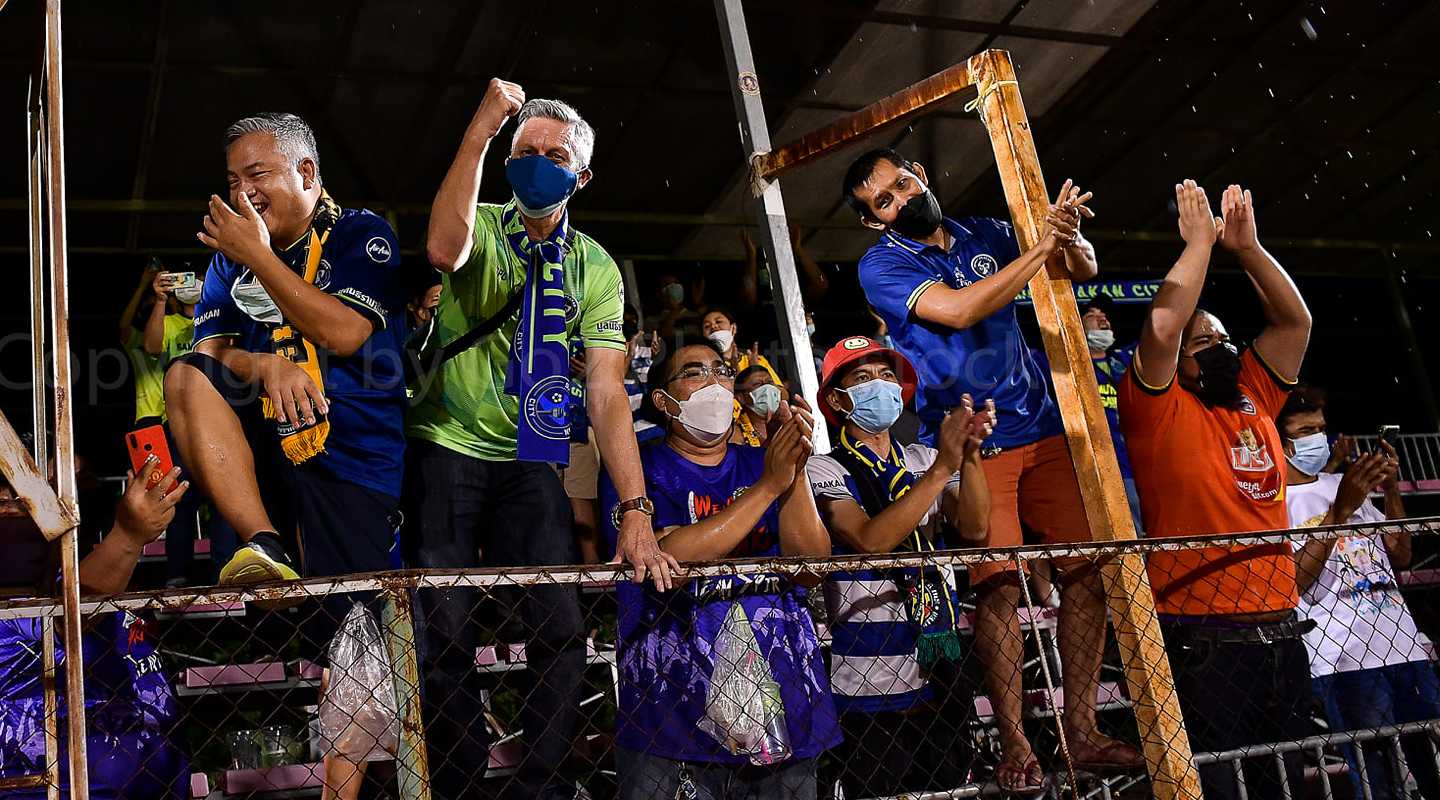 (Time to get behind the team again down at Bang Plee)

Let's look at the current state of affairs where it matters - at the foot of the Thai premier league.

This is how the table stood as we went into Sunday's matches. The bottom four teams had all played 21 games (9 games remaining) except Chiang Mai United who had played 22.

The issue for Samut Prakan at the moment is that teams above them have discovered their mojo and are all picking up priceless points. Today's opponents Prachuap have taken maximum points from their last three games and suddenly look very much a team in form. Not a great time to be playing them at all.

However, we need to be totally focused on catching the two teams above us, firstly by beating Prachuap and hoping Suphanburi fail to beat 4th place Chonburi at home.

Not wishing to get ahead of ourselves but If that's the way results go this weekend, then the situation will look a lot rosier for Samut Prakan come Sunday evening.

On the flip side, if Samut Prakan lose and Suphanburi win, that gap between relegation and survival becomes a massive 8 points, and I just can't see Samut Prakan clawing that back over the remaining games.

Pretty good. The clubs have met three times at the SAT Stadium - twice in the league and once in the FA Cup.

In Samut Prakan's first season, the match ended honours even with a 1-1 draw. Last season, in a closed doors game, a superb Barros Tardelli hat-trick gave the Sea Fang a comfortable 4-0 win.

In this season's FA Cup competition, the two clubs were unlucky to be drawn against each other in the first round (the only all-premier league tie in fact). A pitiful crowd of just 172 turned up to see Samut Prakan put in a commanding performance and run out 4-1 winners.

Despite rising Covid numbers, the Samut Prakan Stadium allowance has still been pegged at 50% of the capacity (about 2,500 tickets). Although there were over 2,000 fans in attendance for the last home match against league leaders Buriram, that was Buriram and this is PT Prachuap. You can expect numbers to drop well below a thousand once again for this fixture. 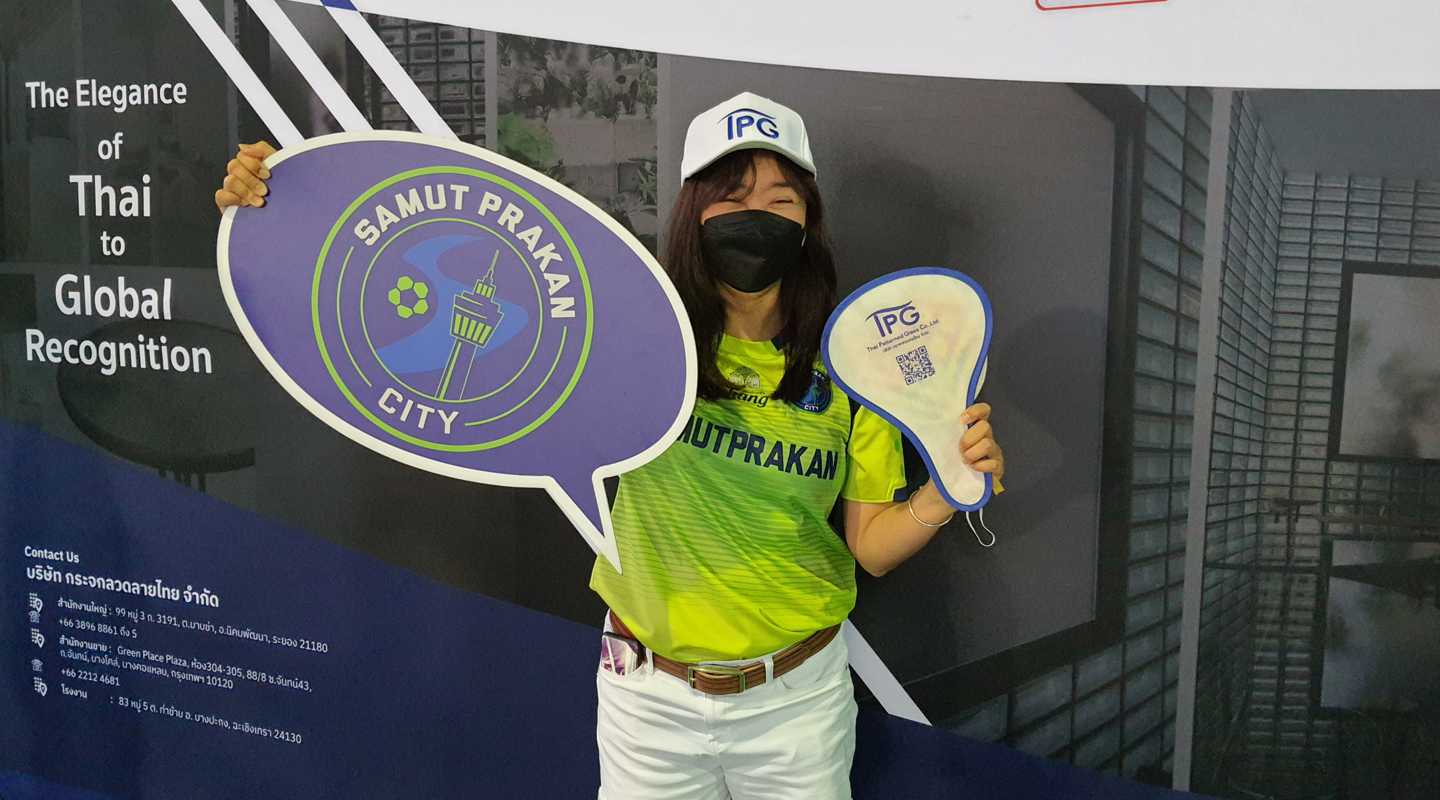 (The evening got off to a good start as Tun took part in some promotional activities and walked away with a couple of prizes, including the baseball cap. The competition involved kicking a ball into a small goal net so with that sort of shooting prowess, is she worth a place in the first time? Although it's probably not going to save our season, it's encouraging to see one or two new sponsors coming on board. In this case TPG, a decorative glass company)

Coach Yoshida and several of the players had gone on social media in the days leading up to the game to emphasize that only a win would do but Samut Prakan still went for a cautious 5-3-2 formation. Regular starter Suphanan Bureerat was serving a one match ban so into the defence came Kandanai Thawornsak for only his 4th start of the season. Elsewhere it was about as strong a line-up as we could put out.

As predicted, just over 600 fans turned up for the game, including a surprisingly healthy following from Prachuap, filling the away section with their bright orange shirts.

After a largely uneventful opening 25 minutes, unless you're a fan of wayward shots from distance, the visitors almost strike the opening blow but the close range header is ruled out for offside. As the half wears on, it's Prachuap who continue to have the better chances but Pathiwat in the Samut Prakan goal is enjoying an inspired evening. Daisuke Sakai spurns an opportunity for the home side but it takes an acrobatic save from Kwanchai to keep the scoreline blank. There's not an awful lot to get either set of fans excited in truth.

Samut Prakan fans had been glued to their smartphones awaiting the result of the earlier kick off between Suphanburi and Chonburi. It turned out to be the worst possible news, Suphanburi edging the game with a 2-1 home win, not helped by the Chonburi keeper getting himself sent off after just four minutes. We were now in a position of needing to win tonight's game just to maintain a five-point gap.

Manager Yoshida made the first of five second half changes bringing on Settawut for Daisuke Sakai and the home side upped the tempo. Captain Chayawat almost scores the opening goal with a long range shot and then goes wide with a weak header minutes later. Kevin Ingresso joins the party and fizzes a shot past the right-hand stick with half an hour remaining.

A draw and a share of the points is a result neither side wants. Apichart goes close for Prachuap thwarted by another fine save from Patiwat, staking a confident claim for tonight's man of the match award.

In the closing stages, gilt-edged chances continue to fall the home side's way but it's the same old story when it comes to finishing. 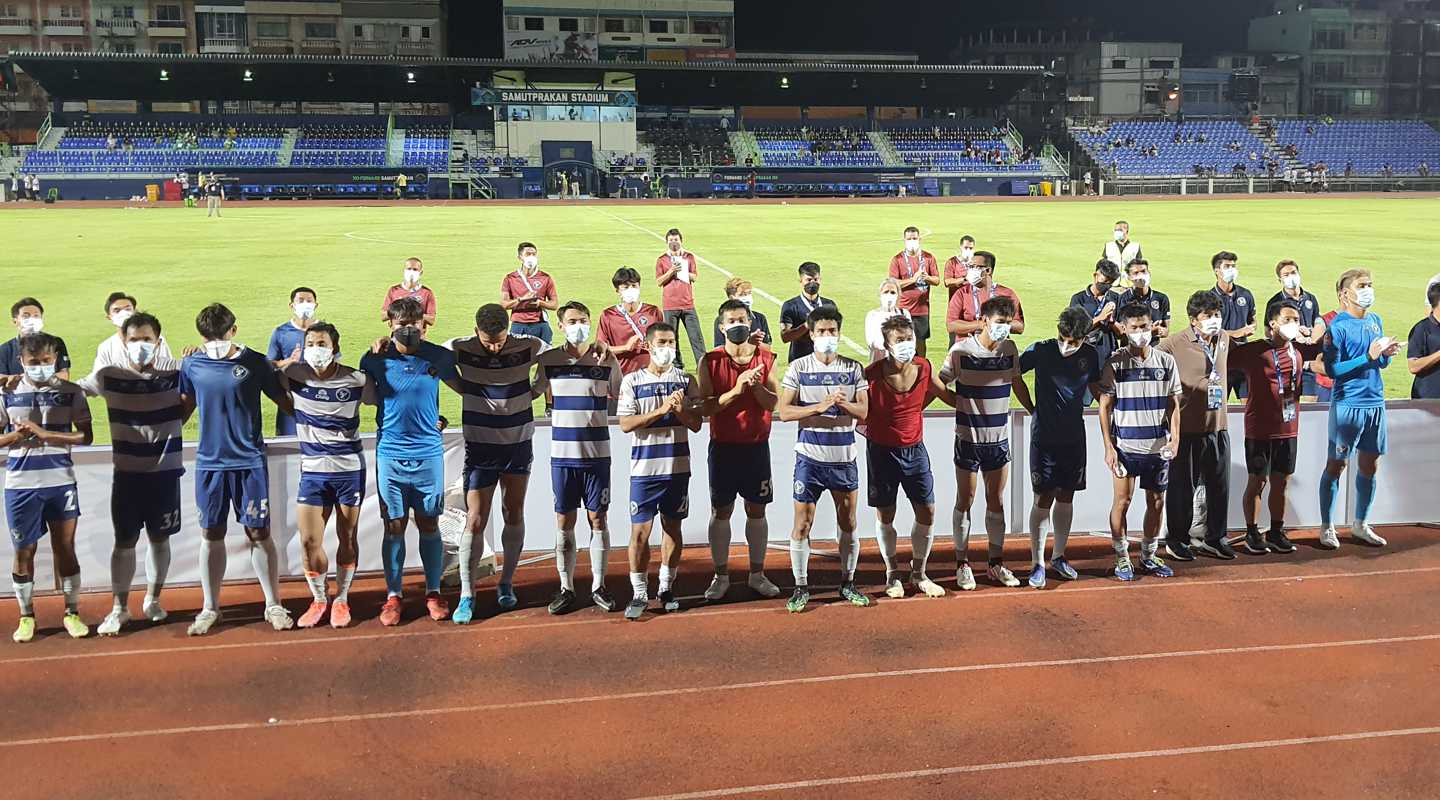 (You did your best again tonight lads)

The stats are beginning to speak for themselves. Samut Prakan have failed to score in their last FIVE league matches - over 450 minutes of football. The manager is still looking to register his first league win. He acknowledges that the goal-shy attack is the problem but doesn't seem to have the answers.

At risk of sounding like a gramophone record, we played some great football tonight but once again it's a zero in the goals for column. And therein lies the problem.

Even the hardcore 'we can still survive' believers in E-zone had a quiet resignation about them come the final whistle, with plenty of humorous remarks flying around about next season's potential 'tour of Thailand' to far-flung outposts like Phrae and Lampang. That's going to be life in the second tier...and tonight's result moves us one step closer to it.

That 7-point gap looks enormous, insurmountable even. Next weekend Suphanburi have a very tough trip to BG Pathum but PT Prachuap will expect nothing less than three points from their home encounter with bottom club Chiang Mai United. Meanwhile...