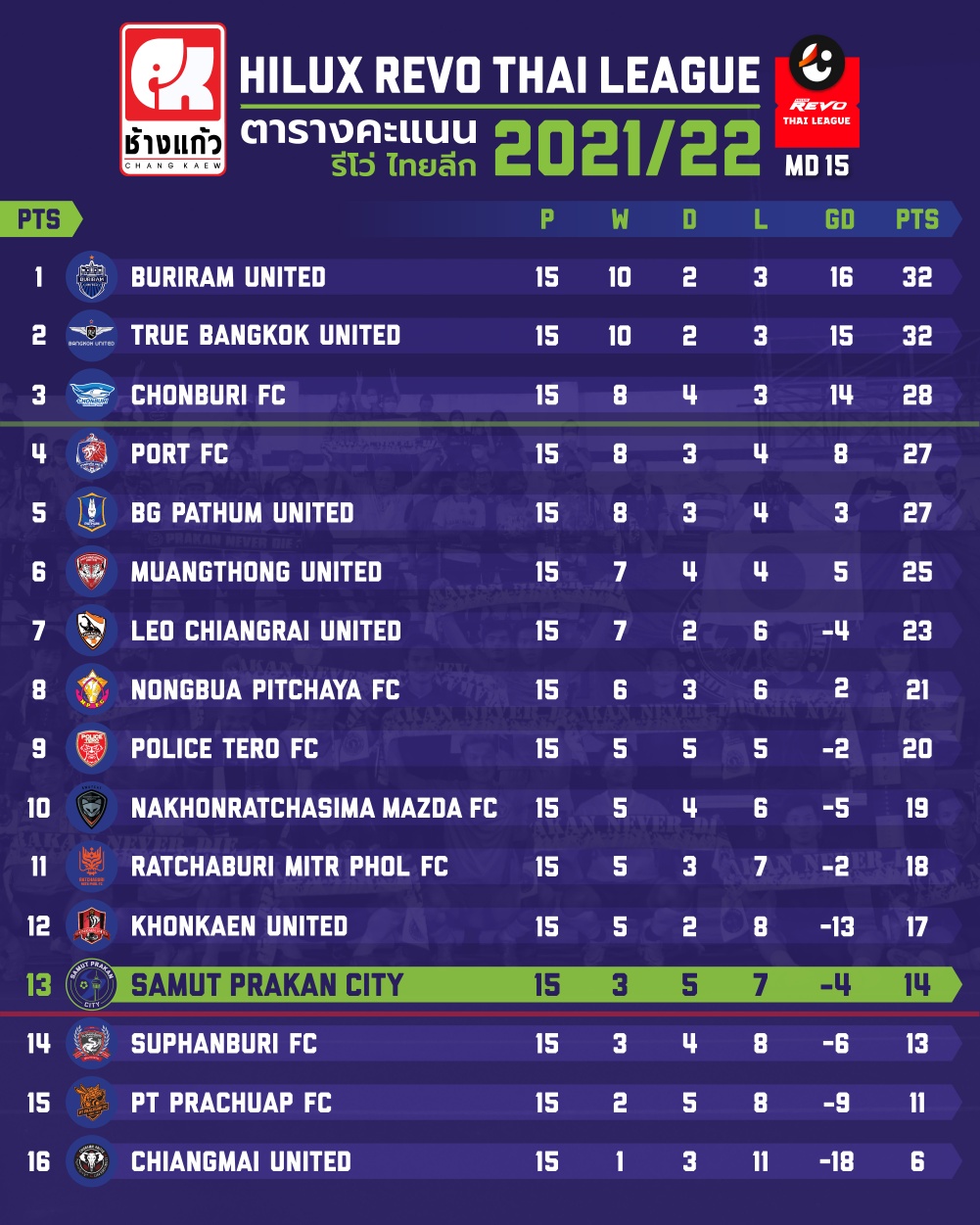 So the league season restarts with Nongbua Pichaya at home?

Yes, and as you can see from the league table at the midway point, Samut Prakan are in a precarious position just one point above the relegation zone. In January, we face a tough away trip to high-flying Bangkok United and while I'm not expecting to get anything from that game, the matches against mid-table Nongbua Pichaya and Police Tero are surely both winnable. We have to hope for four points as an absolute minimum from January's league fixtures.

Before we go any further, a new manager in the hot seat?

Yes, Samut Prakan have appointed 61-year-old Yasushi Yoshida as manager. Yashushi played for almost a decade as a forward for Mitsubishi Motors (now Urawa Reds) in the Japanese first division. His 20-year managerial career has included looking after the U-20 international side. Welcome to Samut Prakan Yashushi-san! 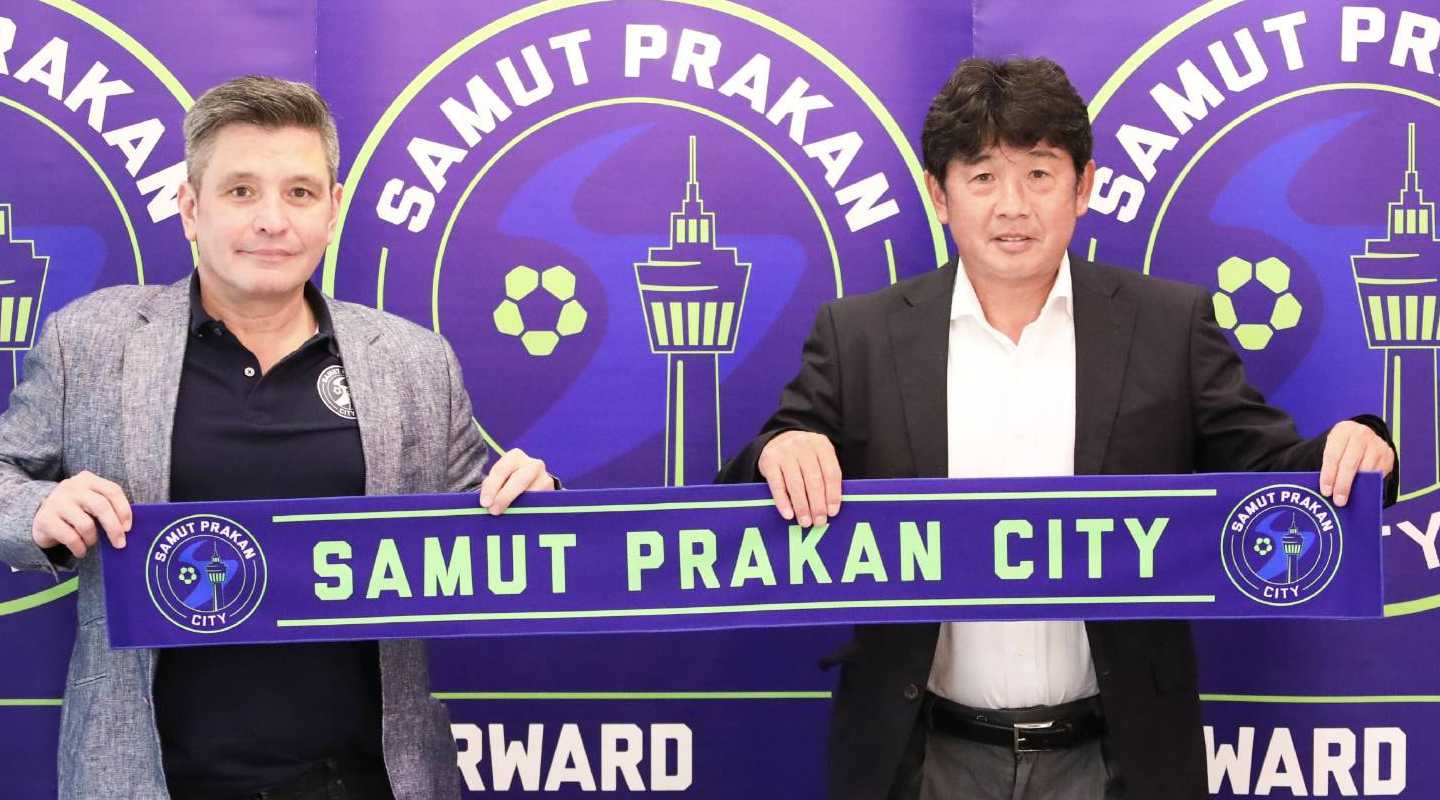 How about the new players signed during the international break?

There have been five new arrivals to my knowledge.

The 28-year-old Filipino midfielder made 34 appearances for Buriram before moving to BG Pathum where he's found it difficult to cement a place in the first team. He also currently represents the Philippines at international level. One of my football writer friends said "You're getting an outstanding professional, a reliable first-teamer, and a good personality in the squad. Great deal"

Hooray! a signing from Buriram (how nice to see someone coming in the other direction for a change) The 30-year-old Brazilian striker has scored 14 goals in his 31 matches for Buriram and his extensive list of previous clubs includes LA Galaxy in the USA and Jeonbuk Hyundai Motors in Korea. He surely has to be an upgrade on Eliandro.

Settawut has joined from Chonburi for the rest of the season. The 24-year-old striker has made over 35 appearances for The Sharks but more recently has been sent out on loan to second division clubs MOF Customs and Ayuthaya United. Settawut has also represented the Thailand national team at U-21 and U-23 levels.

The 26-year-old defender has come in on an actual transfer from Chainat Hornbill and his previous clubs include Grakcu Sai Mai United and Angthong FC, aside from being in previous Thai national U-19 teams. He will take shirt number 20 at Samut Prakan.

The 28-year-old striker has joined from Sukhothai FC but will probably be very much a back-up squad player.

Who's left the club?

As for players heading for the exit door, we've said goodbye to Eliandro. He was a hard-working player but it never really worked out did it?

Back to the match v Nongbua, how has their season been so far?

The newly promoted Gamecocks have had a decent campaign and currently lie in 8th position. Notable results have included a 3-1 home win against BG Pathum and draws at both Buriram and Bangkok United.

Aris Jarifovic scored the only goal of the game in a 1-0 win for Samut Prakan when the two sides met at Nongbua very early in the season. I wouldn't mind a repeat of that scoreline today. 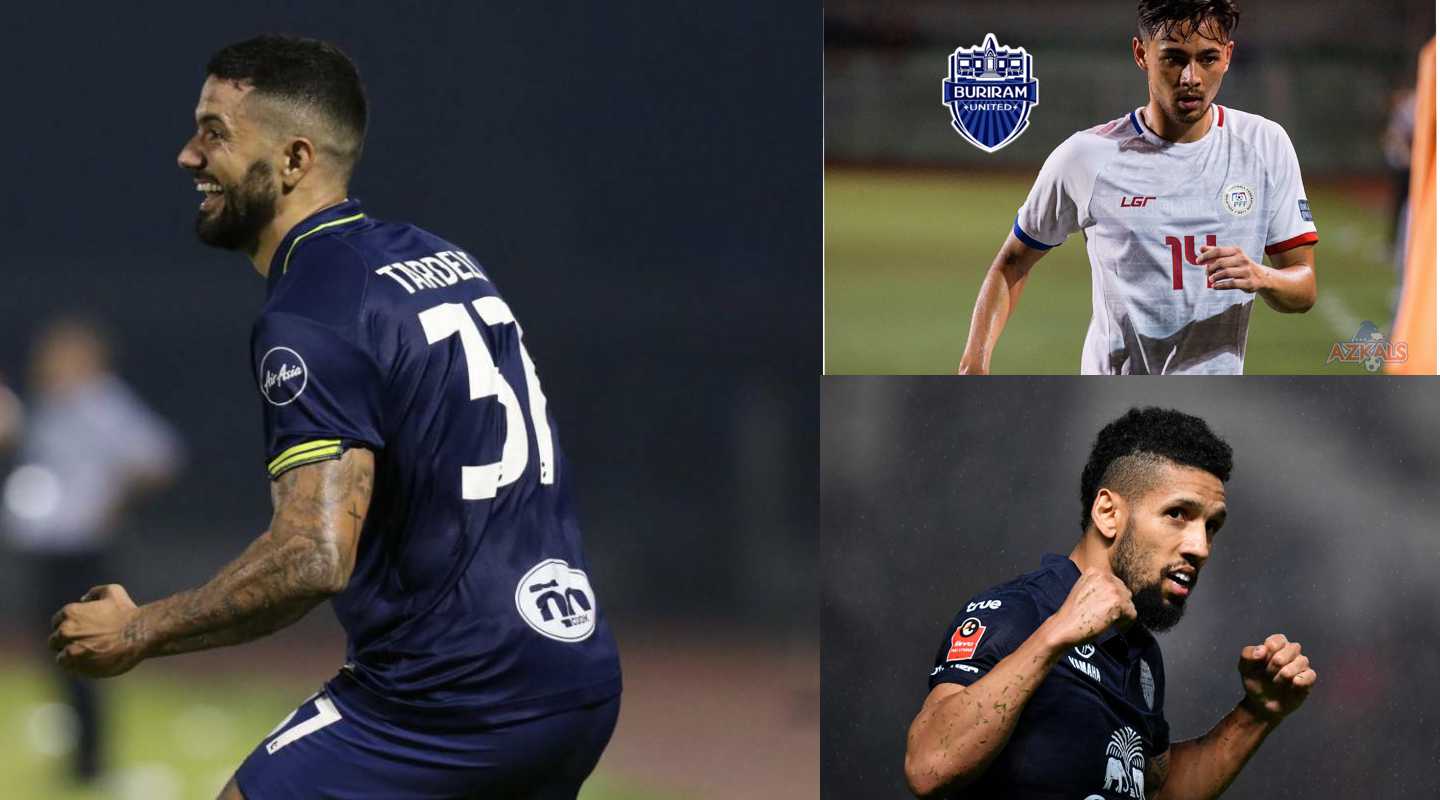 And this game is a chance to meet up with an old friend?

Yes, in a surprise December transfer, our second season goalscoring hero Barros Tardelli returned to the Thai League, moving to Nongbua from Suwon FC in Korea. I've read that the Brazilian striker has taken a considerable wage cut for the chance to return to Thailand after things didn't work out for him at all in Korea. Not only could he not get regular first team starts but his family couldn't settle there either. Anyway, welcome back Barros!

Interestingly, match tickets went on sale on January 2nd and the stadium capacity was increased to 75%, however, I had a feeling that the Omicron variant might still have the final word, and sure enough the capacity was reduced to 50% on the eve of the game.

Four of the new arrivals got a first start - Ingreso, Samuel Rosa, Settawut and Chatri. Captain Chayawat was once again out injured but there was a welcome return for Japanese midfielder Yuto Ono.

A new-look Samut Prakan side settled into the contest well and with barely three minutes on the clock, the impressive Settawut, on loan from Chonburi and arguably the most impressive of the four debutants, is bundled over on the edge of the penalty area. The referee immediately points to the spot but VAR over-rules him and awards a free-kick instead. It's one of those you could watch back a dozen times on action replay and still be undecided. However, from that sort of range, a free kick is almost as good as a penalty to Yuto Ono and he steps up to float it beautifully into the top corner.

The home side continue to create chances in what was rapidly becoming their best performance of the season and deservedly take a 2-0 lead in the 24th minute. It's a classic counter-attacking goal with two debutants combining. Aris Jarifovic launches the ball upfield, Samuel Rosa does brilliantly to shrug off the Nongbua defender and his precise chip to the far post is headed home by Chatri Rattanawong to open his Samut Prakan account.

Settawut has the opportunity to put the game out of sight on the half-hour mark but sees his long-range effort rebound off the post.

A blistering first half showing from the Sea Fang with goalkeeper Pathiwat barely dirtying his gloves, such was Samut Prakan's dominance. 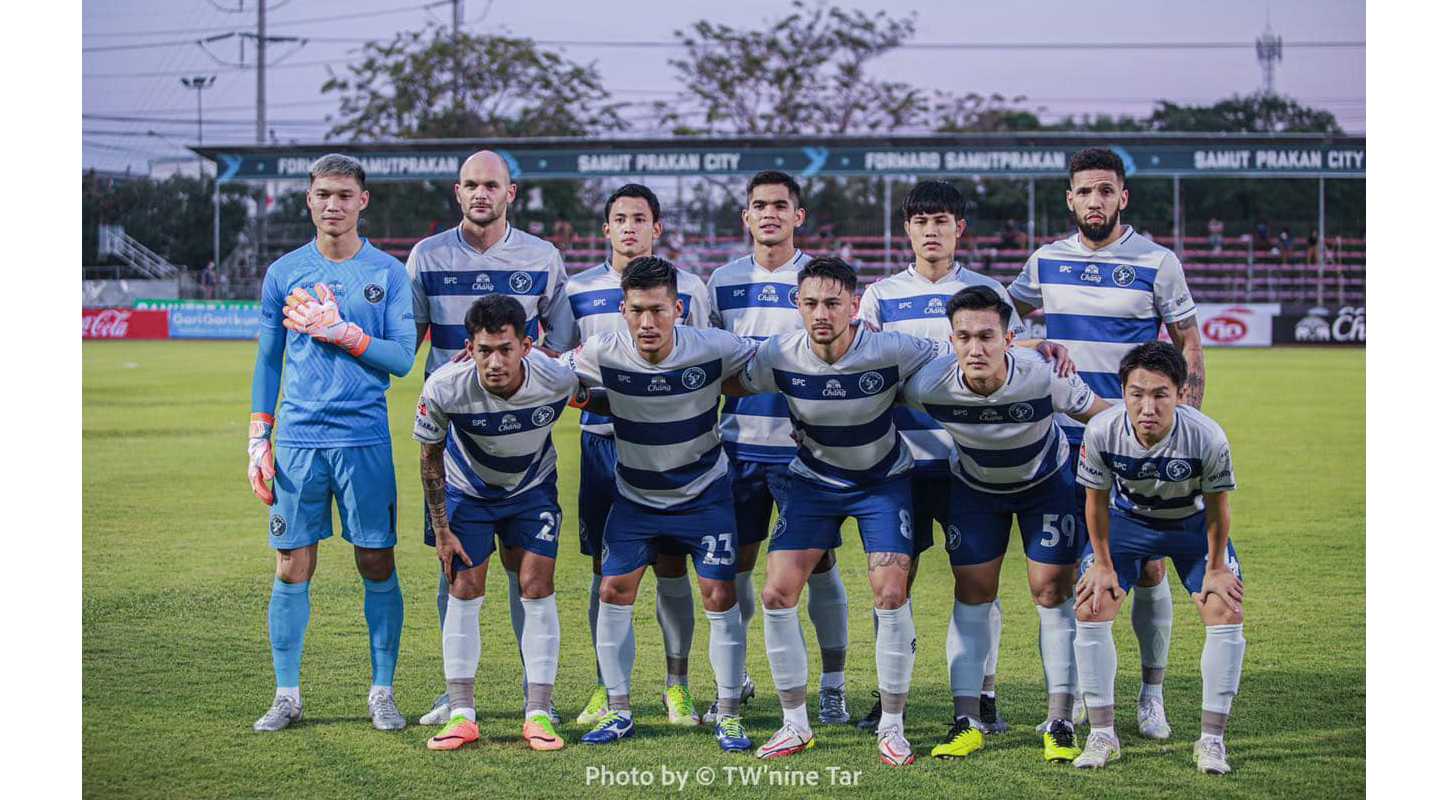 Home fans would be forgiven for thinking they could sit back and enjoy the second half but Nongbua weren't giving up that easily and were determined to give their impressive travelling support something to cheer. We're just a minute in as Barros Tardelli, who had a stinker of a first 45 minutes, crosses to fellow Brazilian Hamilton Soares and his looping header puts The Gamecocks back into the contest. You have to keep an eye on the dangerous Soares and Jarifovic is visibly angry that the Samut Prakan defenders around him haven't done so.

Chatri Rattanawong has the chance to restore Samut Prakan's two-goal lead but blasts over from close range, however it's the away side in purple creating the better chances and the equaliser on 59 minutes comes as no surprise. Step forward who else but Mr Tardelli, as he outjumps his marker with embarrassing ease to head in a trademark goal.

Samut Prakan are marginally the better side in the last half hour as both teams go in search of the winner. An Aris Jarifovic header flies over the bar and another Yuto Ono free kick produces a fine save from Kittikoon in the Nongbua goal.

A decent game ends honours even at 2-2.

I'm wondering if one of the Nongbua staff slipped something into our half-time drinks because the first half and second half performances were like night and day. In the first 45 minutes, we looked like a Samut Prakan team of old with a certain swagger and confidence about us. After the break, we looked nervy and allowed Nongbua too much possession and time on the ball.

Very impressed with our quartet of new faces. Samuel Rosa did a lot of good work creating space and opening up the opposing defence, Kevin Ingreso was solid enough, but it was Settawut Wongsai who really caught the eye. Whatever happens, it means more competition for places within the Samut Prakan squad and that can only be a positive thing.

Finally, it was great to see Tardelli come over to the home fans at the end of the game to say hello and 'apologise' for the equalising goal.

590 was a woefully disappointing attendance this evening. I heard that many of the regular faces were having to isolate or do quarantine but even so, we're a long way from even filling half the ground. It's as if the interest level among fans has just plummeted.

We turn our attention to the Thai League Cup competition and a tricky midweek trip to third division Pluakdaeng United in the round of 32.