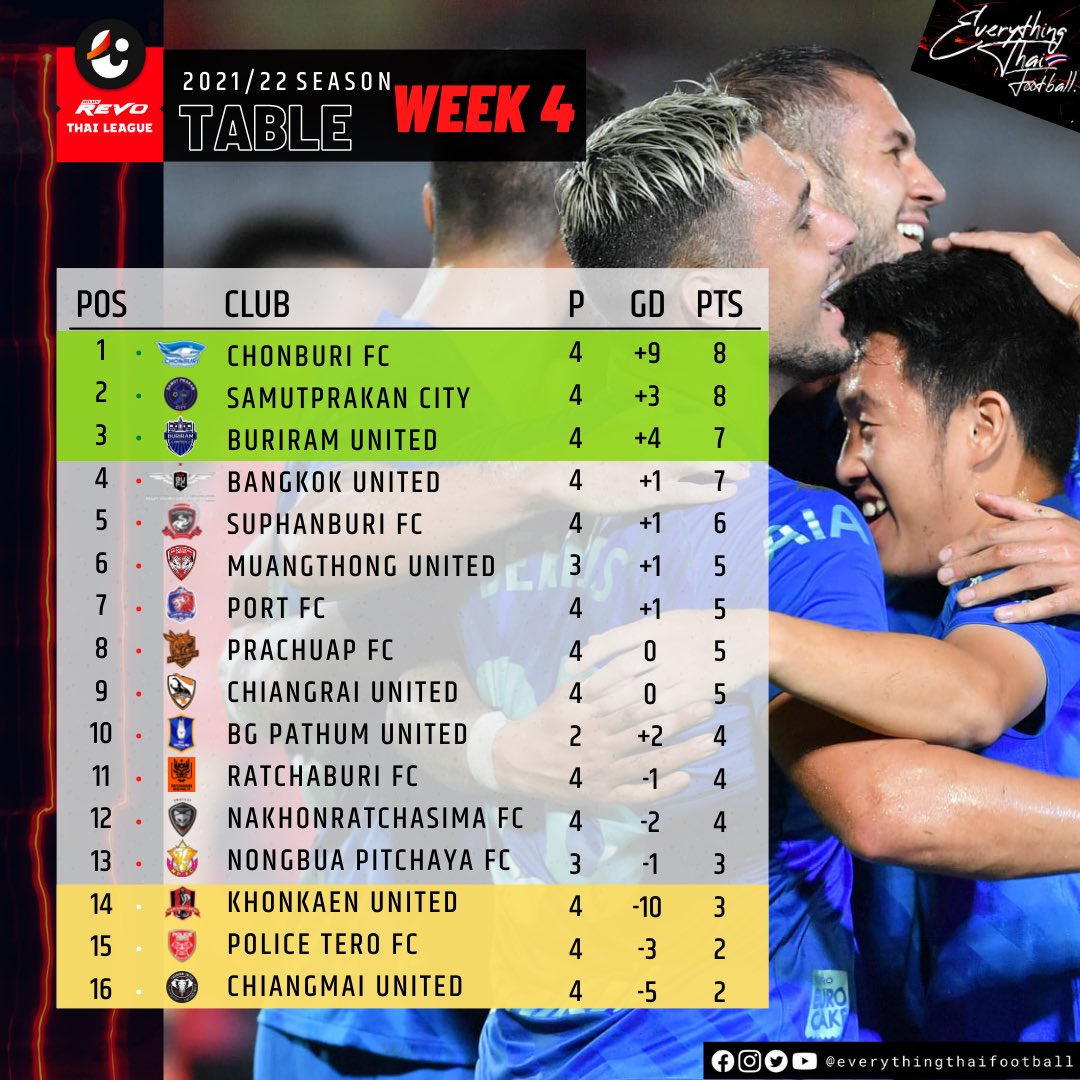 (The Thai premier league table as it stood after gameweek 4)

So it's Samut Prakan at home to Chiang Mai United. Second place v bottom of the league as it currently stands?

Yes, Chiang Mai United were promoted as runners-up from the second division last season but so far have found life tough in the top tier, taking just two points from their opening four games and still looking for that first win.

They've had two decent draws away at Suphanburi and at home to Nakhon Ratchisima but against the 'top sides', they've been thrashed 4-0 at Buriram and lost 2-1 at home to Bangkok United on the opening weekend.

The main goal threat probably comes from Brazilian Evson Patricio, but he hasn't found the net this season as yet. In fact in his 50-plus appearances for the two Chiang Mai clubs (Chiang Mai FC and Chiang Mai United), he's barely managed a goal every four games.

Club captain and centre-back Sirisak Faidong came to the club a couple of seasons ago from Army United and is seen as a key player, but I notice he was demoted to the bench for Chiang Mai's last game.

And with this fixture, Samut Prakan are reunited with a couple of familiar faces?

Yes, Chiang Mai United coach Surapong Kongthep was the much-loved and respected manager at Samut Prakan City in our very first season. He was in charge for 14 league games (winning half of them and losing just three) before leaving the club in unexpected and mysterious circumstances. Not wishing to sound harsh, but it's been all downhill from there. After a short spell at Chiang Mai FC (Chiang Mai's other league club, currently in T2) he was taken on as coach at Sukhothai, where he lasted a full season but unfortunately couldn't avoid relegation. Obviously eager to remain coaching in the top flight, he now finds himself at Chiang Mai United and quite possibly with yet another relegation scrap on his hands.

We also renew acquaintances with Boworn Tapla, who was at Samut Prakan for the first half of that inaugural 2019 season. Although not what I'd call a nailed-on first teamer, I was one of the 595 fans in attendance to witness his finest moment in a Samut Prakan shirt, when he banged in four goals against North Vachilalai United in an early round of the FA Cup.

He always seemed like a nice lad with a good attitude and I've been pleased to see him getting regular starts for Chiang Mai United and another opportunity to play in the premier league. 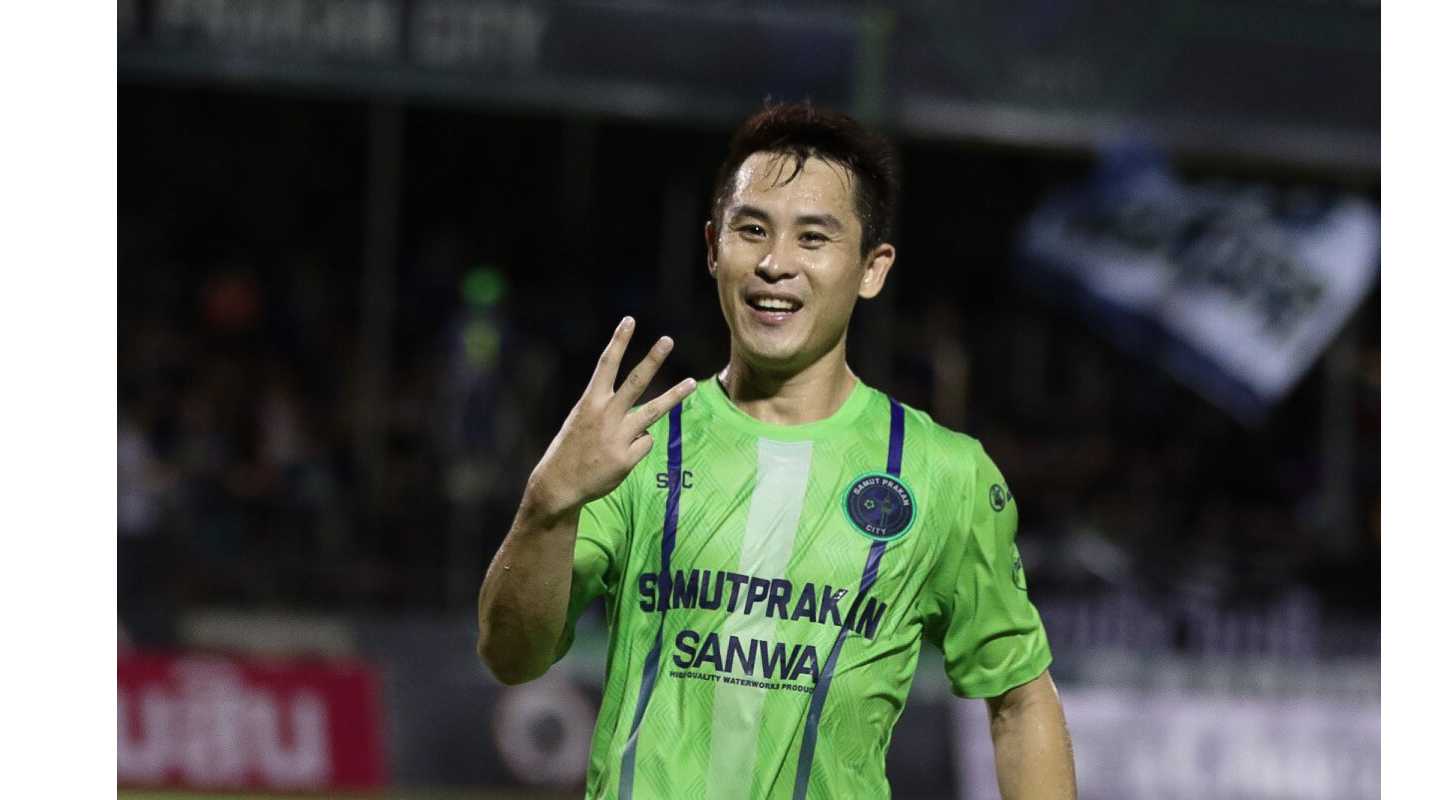 (It was four goals Boworn, not three)

On paper and given current form, Samut Prakan probably just need to turn up - but things are not always that straightforward in Thai football. I have to be confident of a victory here though so I'll go for a 3-1 home win. Much depends on whether coach Ishii decides to go with his best line-up, or do as he did in the last game at Police Tero and rotate the squad.

With Chonburi losing at home to Chiang Rai on Friday night, there's the added incentive that a win will take us back to the top of the league. 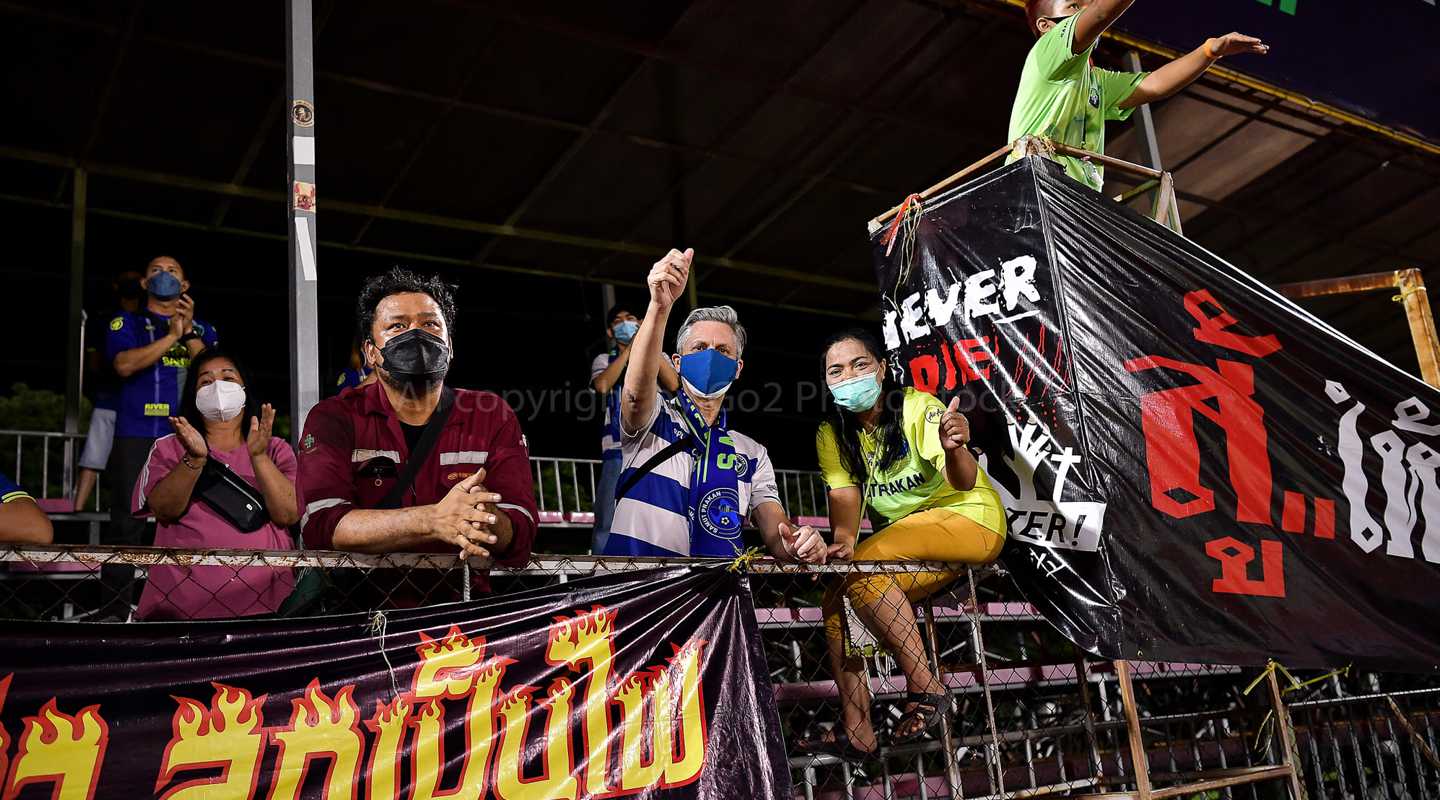 (And we are back in the stadium to cheer on our favourite team. Photo: Go2 Photo Stock)

Are fans allowed in for this game?

The club announced late on Thursday that 25% of the capacity would be allowed in for the match. That's around 1,275 fans, but with many supporters not having had the required vaccine jabs or not wishing to go through the rigmarole of getting a Covid test certificate, we'd be extremely lucky to get half that number methinks.

I managed to get a ticket though. The convaluted process involved uploading passport ID and vaccine certificates to Samut Prakan's LINE app and then doing a bank transfer. It was a rather awkward way of doing things but we got there in the end.

To the game itself. Team line up?

With a cooling breeze blowing through the sparsely populated stands, it was the perfect night for watching football, so a great shame that the first half was low on entertainment and only really noteworthy for four Chiang Mai players receiving yellow cards, including Samut Prakan old boy Boworn Tapla.

Despite Samut Prakan enjoying the lion's share of possession, they didn't carve out one decent goal-scoring opportunity while the visitors enjoyed a purple patch in the final ten minutes that included a disallowed goal from Yannick Boli (VAR clearly indicating that he had kicked the ball out of the goalkeeper's hands) and a left-wing cross from De Leeuw that clipped the crossbar.

I had completely forgotten and made no mention of Yannick Boli in the 'players to watch' section but the Ivorian striker, on loan from Port FC, has a goal-every-two-games record in the Thai league. And it was going to be his night.

It took just two minutes for Chiang Mai to take a surprise lead. Yannick Boli jinks past Zarifovic in the box and his shot takes a wicked deflection off Srayut Sompim, completely wrongfooting Pathiwat in the Samut Prakan goal. The home side a goal down but plenty of time on the clock for a comeback.

In a frantic search for an equalizer, Captain Chayawat fizzes a shot straight at the Chiang Mai keeper and only a terrific last ditch intervention prevents Daisue Sakai scoring an easy tap-in. Samut Prakan's Laotian international Phoutthasay Kochalern is introduced on 64 minutes for the ineffective Nopphon, and he instantly goes close with a long range effort just inches over the bar.

The clock ticks down and the killer second goal comes 12 minutes from time. A pinpoint left wing cross leaves Yannick Boli with a straightforward header as he outjumps Chaiyawat Buran with ease.

Eliandro and Jaroensak immediately combine to pull a goal back for Samut Prakan and suddenly there's hope for the couple of hundred fans in the stadium but Chiang Mai counter attack and score a carbon copy of their second goal to put some gloss on the final scoreline. Khapfa Boonmatoon, a 75th minute substitute, getting his name on the scoresheet with another header from a left wing centre.

I got the 3-1 scoreline right with my pre-match prediction but just the wrong team!

Joking apart, we didn't play that badly but it was just one of those nights. Full credit to Chiang Mai for taking their chances.

Good to see Eliandro get his second goal for the club but he's still a worry for me. He gets brushed off the ball far too easily for such a big man. Another worry is of course Jaroensak. Most of the attacking threat comes from the Samut Prakan wing wizard and when he leaves the club - as he's sure to do in the not-too-distant-future - it's going to leave a gaping hole up front.

A final word on the attendance?

My prediction of maybe 500-600 fans was wildly optimistic, with just 266 in attendance. It felt like I was on at least nodding terms with almost everyone I passed - a sure sign that we were down to the real hardcore. 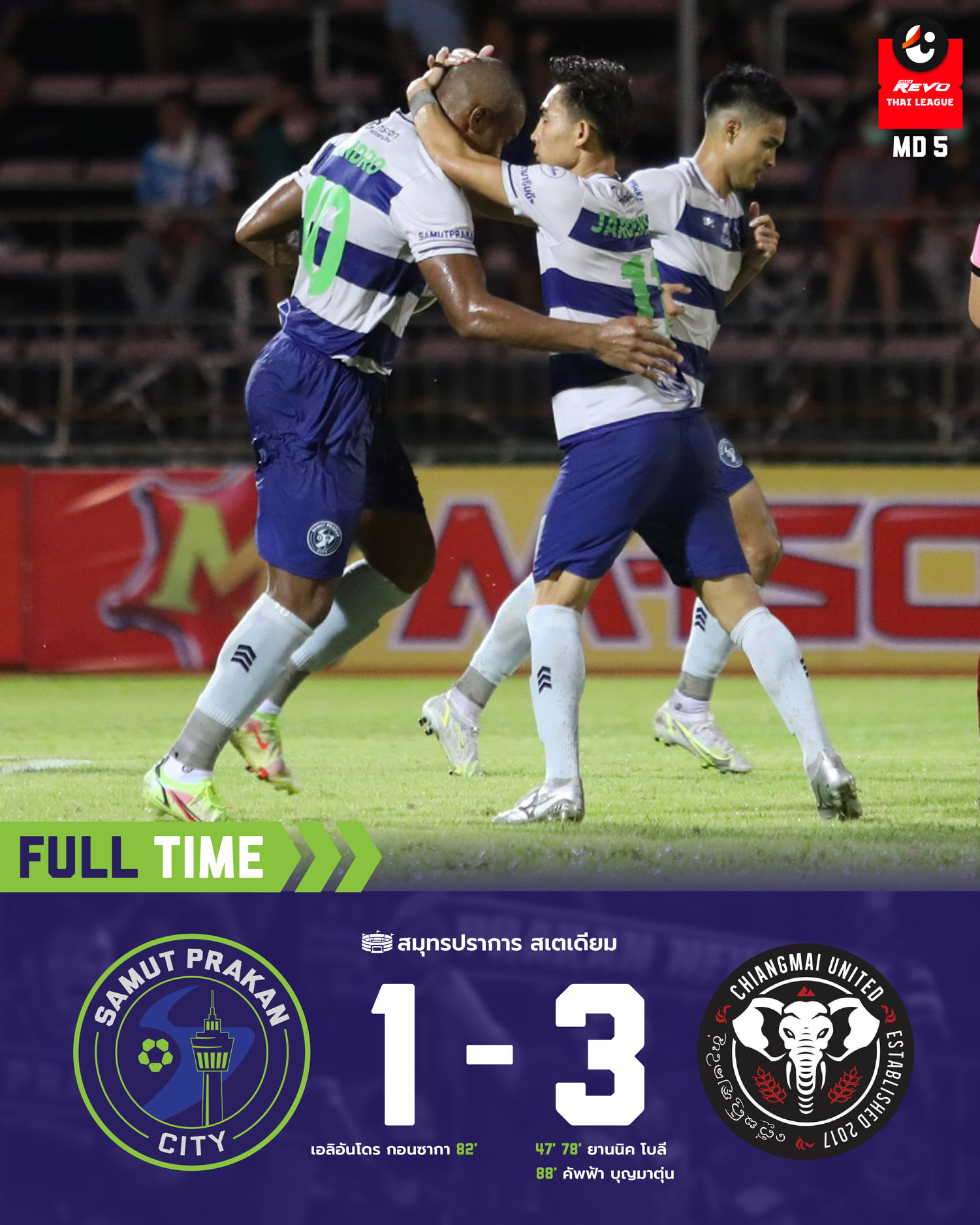 Sadly no. I have my second vaccination jab on that day and obviously I can't miss that. It's disappointing because Buriram is certainly allowing away fans into the ground and I had a wonderful time there last season.