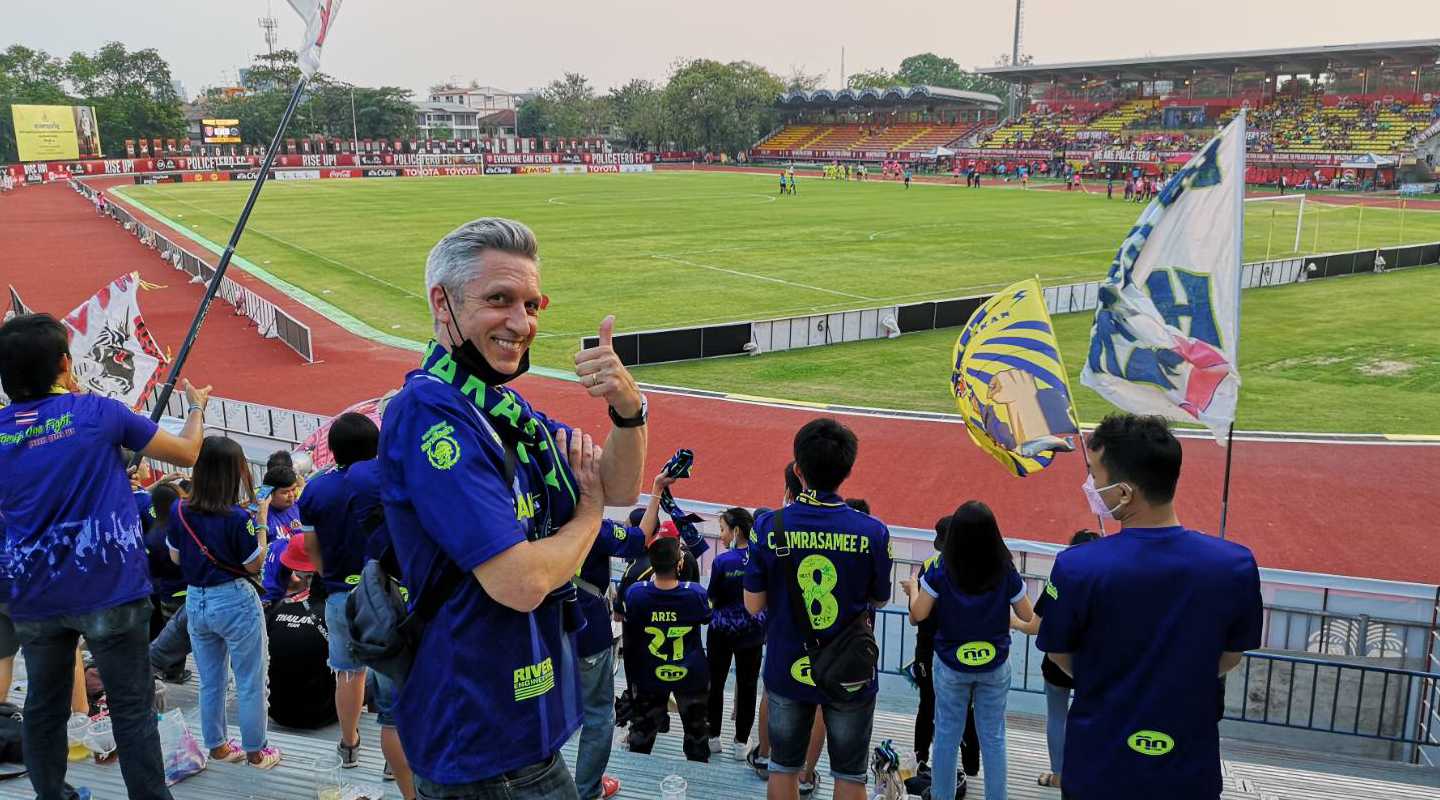 So it's Police Tero away and not particularly fond memories?

I recall the corresponding fixture in March 2020 for three main reasons. Firstly, the Samut Prakan fans were shoved into a crappy uncovered away section, a fair way from the action. Secondly, it was a bloody awful game, with Police Tero running out 1-0 winners and scoring with virtually their only shot on target. Finally, on entering the stadium, it was the very first time I'd had a temperature gun waved at me. This game marked the beginning of the Covid era and in the days that followed, the situation worsened and the Thai League was suspended. Fans never saw a ball kicked for another six and a half months. And supporters waving flags and beating drums - which is a big part of the matchday experience - is still not allowed in any stadium.

We owe these guys a beating?

The 1-0 defeat at their place I've already mentioned but in the return game at the SAT Stadum, Police Tero battered us 5-3 on what was another night to forget. Yes, it's high time we took some points off the Silver Dragons, or whatever their nickname is.

How have Police Tero started this season?

Due to Covid restrictions, Tero have played all of their opening three games away from home. They began the campaign with an excellent 3-3 draw at Port FC (leading 3-1 at one stage) but it proved to be a false dawn and was followed by a 3-1 defeat at Buriram and a 1-0 reverse against bottom club, Nakhon Ratchisima. So with just one point on the board, they find themselves in the relegation zone, where a number of Thai football pundits expect them to be come the end of the season.

Experienced Ghanian defender, Isaac Honey, has been playing in the Thai League for about 8 years and has notched up 150-plus appearances for various clubs. He hasn't got a bad goalscoring record for a defender either.

Brazilian Evandro Paulista scored a brace in that opening day draw at Port FC and will be another to keep an eye on. The classic footballing journeyman, Paulista has played in the Brazilian, Korean, Japanese and Chinese leagues.

Veteran striker, Teeratep Winothai, joined on loan from Chonburi midway through last season. Teeratep has over 50 Thai international caps to his name and has the honour of once scoring the winning goal against Manchester United, when he turned out for a Thai All-stars XI during a Red Devils pre-season tour in 2013.

Presumably this game will be behind closed doors?

Almost certainly. I did contact Police Tero via Facebook Messenger to ask if fans would be allowed in (I sort of knew what the answer would be) and got an automated reply to say that the new club shirts are available in small, medium and large. Top work lads!

This is the kind of game we should be winning and need to be winning. I don't think there'll be much in it but I'm going for Samut Prakan to edge it 2-1 and stay in touch with the leading pack - for another week at least.

It's a much changed (and rather surprising) Samut Prakan line-up for this one and I can only think there are a number of injury niggles. Captain Chayawat starts on the bench as do three players who have been instrumental in our successful start to the season - Jaroensak, Daisue Sakai and Chaiyawat Buran.

In for his full debut comes Kittipong Sansanit, a Summer signing from Muangthong. Yuthapichai Lertlam and Jiraaut Winggon are also drafted into the team, but with 25 league appearances between them last season, there's no lack of experience there.

Noppon Phonkham is given the captain's armband.

To the match itself and first half.

I was thinking how lucky we'd been to get through September's fixtures without having to play through a single monsoon downpour, and the good run continued in tonight's game at The Boonyachinda Stadium, although especially in the penalty areas, the pitch looked on the heavy side.

The Samut Prakan defence made a nervy start but there was little to trouble either keeper in the first twenty minutes. The visitors finally got a toehold in the game at the midway point and some slick midfield passing led to a succession of corners, with Aris Jarifovic - playing some of the best football of his Samut Prakan career - providing the chief threat in the home penalty area.

Police Tero became reliant on hopeful punts upfield and what few chances they did create culminated in some woeful finishing. You felt if they were going to get a sniff of a goal, it would be from a Samut Prakan error rather than something they'd practiced on the training ground. And that's exactly what happened. Five minutes from the interval, Samut Prakan over-pass their way out of a defensive tight spot, lose possession, and Isaac Honey accepts a gift. A hammer blow to the visitors, who had looked technically superior for lengthy periods of the first half.

Manager Ishii-san wasted no time in sending on the big guns for the second 45 - obviously, all part of the master plan. The freshly introduced trio of Chaiyawat Buran, Daisue Sakai and Jaroensak set about raising the tempo and rescuing the game. Captain Noppon joined the party perhaps a tad over enthusiastically and was shown a yellow card for a cynical trip.

Samut Prakan levelled matters on 51 minutes. Jaroensak whips in a trademark cross, Kittipong in the Police Tero goal flaps and misses, leaving Suphanan Bureerat to bundle the ball home. A nervy few minutes follow while we await a VAR check but there was adjudged to be no foul on the goalkeeper and the goal stands.

Tero striker Paulista heads over the bar to remind everyone he's still on the pitch and Phatsaphon drags a shot wide for the Sea Fang. Both sides fancy all three points here.

Chayawat Srinawong comes on for Samut Prakan with 20 minutes remaining and claims the captain's armband from Noppon. Good to see him back!

Samut Prakan spurn a golden chance for the winner as another deep Jaroensak cross is met by Daisue Sakai, but his sidefoot pass across the goalline somehow manages to evade Eliandro by inches.

The five minutes of injury time see Chayawat draw a good save from Kittipong (hurting his hand in the process) and there's still time for Prakan keeper Patiwat to keep out a testing free kick with the last action of the game.

My initial reaction is that it feels like two points dropped. We were the better team tonight - but we just can't seem to beat Police Tero!

It was good to see several fringe players given a start and in all fairness, they did well for the 45 minutes they were on the pitch but the introduction of the three first-teamers certainly gave our play that extra zip.

Anyway, whether you consider it two points dropped or a good away point, we're still joint top of the league with Chonburi (it sounds much better than we're second on goal difference) and with a relatively straightforward home game next weekend (at least on paper), let's keep that unbeaten record going and enjoy life at the top end of the table a bit longer. 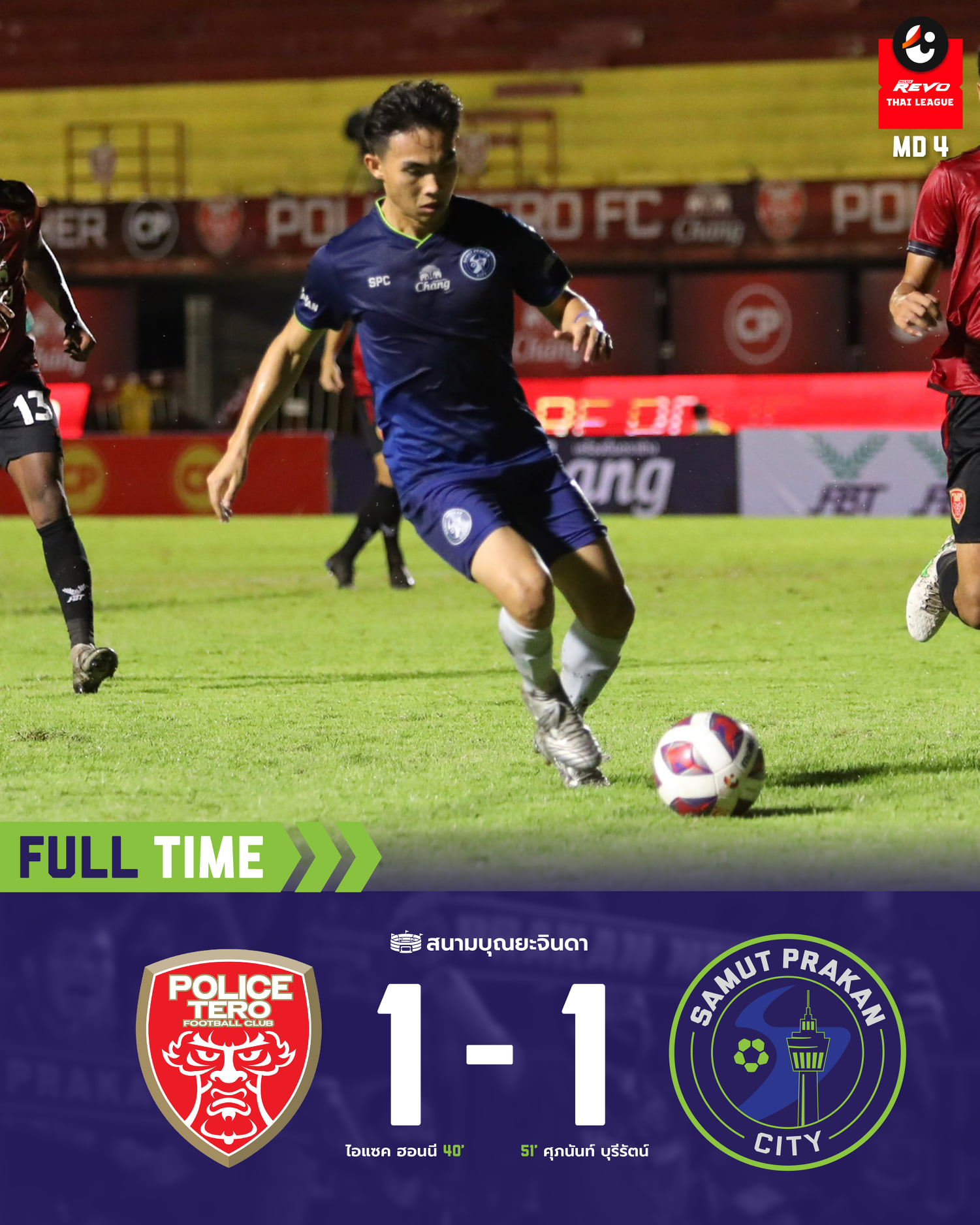 We move into October, where we have 7 matches scheduled starting with bottom club Chiang Mai United at home next Saturday (2nd October)