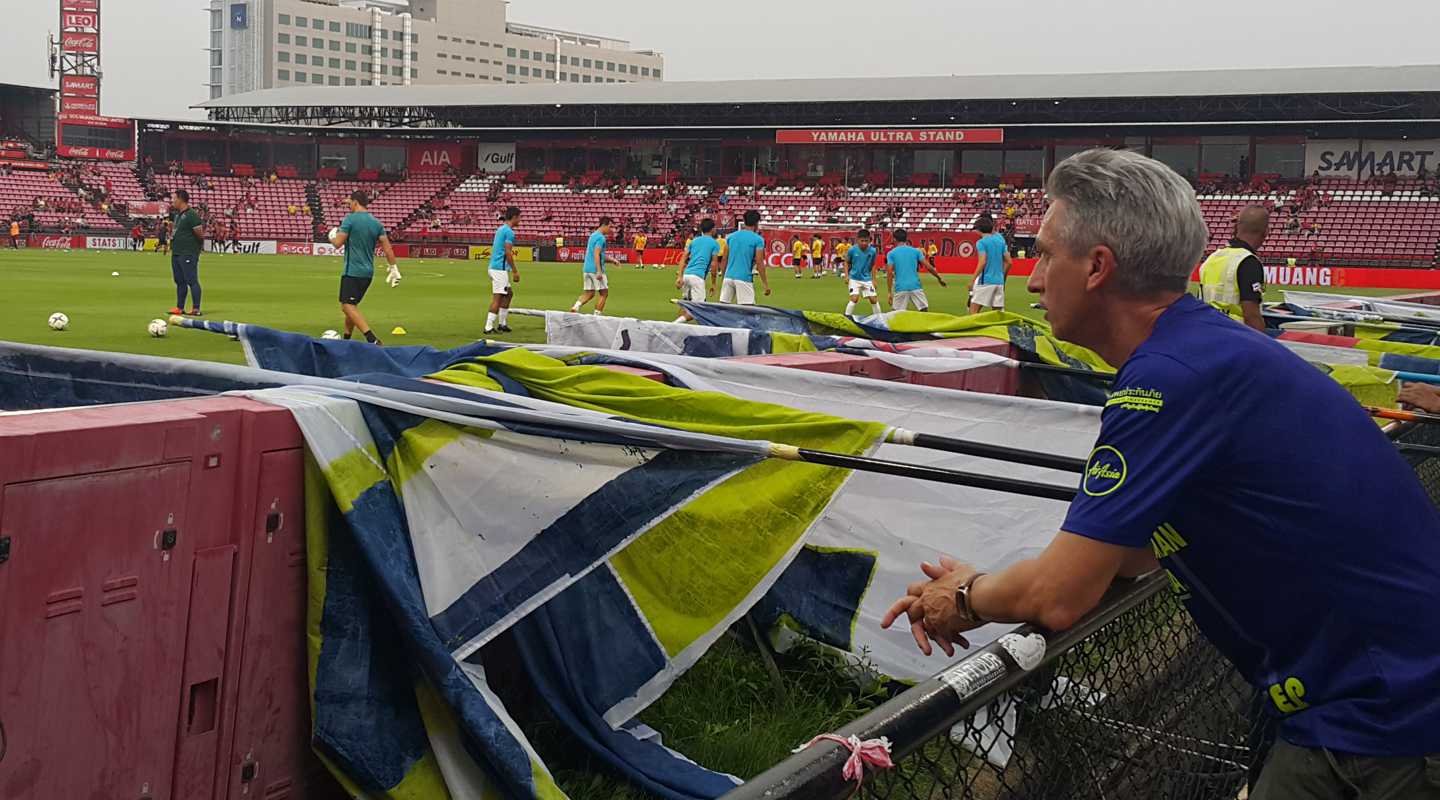 (I've always enjoyed my trips to Muangthong's SCG Stadium. It's a little bit shabby close up but thanks to no running track, away fans enjoy a decent view)

OK, let's have a look at the foot of the table as it stands before today's game.

Chiang Mai United's goal-less draw with Chiang Rai last weekend means they are the first team to be relegated, their return to the top flight lasting just one season.

And survival for the Sea Fang is beginning to look like mission impossible?

Samut Prakan need to pick up maximum points by winning ALL of their remaining four games - that's pretty much a given. But even a 34-point total probably wouldn't be enough. We would still need to hope that either Nakhon Ratchisima or Ratchaburi collect fewer than six points from their remaining five games - and just to compound matters further, they still have to play each other. Yes, it's looking extremely bleak.

Who plays who this weekend?

Ratchaburi are at home to Port FC (a game they'll be hoping for at least a point from), Nakhon Ratchisima have a tough trip to second place BG Pathum, and Suphanburi are away at 4th place Chiang Rai.

Can Samut Prakan be mathematically relegated this weekend?

No. But if Samut Prakan lose and Nakhon Ratchisima win, then we cannot catch them. We could still feasibly catch Ratchaburi and Suphanburi, however it would take a highly unlikely set of results.

It's worth pointing out that if two teams finish the season on the same number of points, Thai league positions are decided on head to head results between the two clubs and NOT goal difference. So for example, Samut Prakan have a draw and a defeat against Nakhon Ratchisima this season...and that's the reason Nakhon Ratchisima could be out of sight after the weekend's games.

We live in hope. Actually Samut Prakan have a good league record against Muangthong?

Yes, there have been a win and a draw in our two league visits to the SCG Stadium. In Samut Prakan's first season - and in what surely ranks as one of our finest ever second half performances - we ran out 3-0 winners. Last season, on a horribly wet night in North Bangkok, the two teams battled out a goalless draw that's best forgotten. Muangthong also knocked us out of the FA Cup last season at the round of 16 stage but we'll brush over that one.

They're having a decent season this time around though?

Muangthong currently lie in 7th place but will certainly fancy themselves for a top four finish if they can end the season strongly.

Home win written all over it then?

You would have thought so. But if we put in a display like we did at Port FC a few weeks back, who knows? 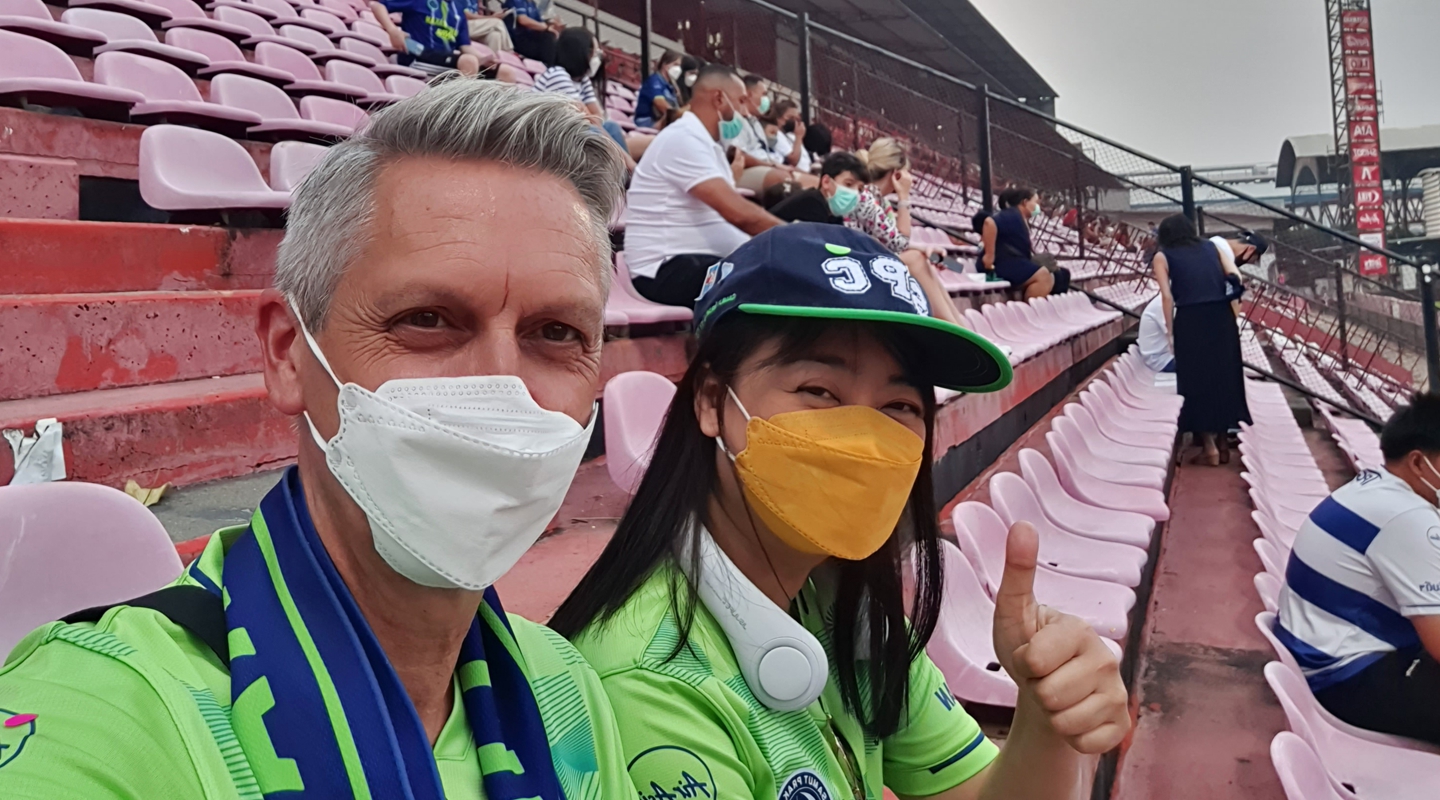 We covered the distance to the SCG Stadium, or Thunder Dome as it's now known, in around 45 minutes. It's an easy if dispiriting run on Bangkok's elevated expressway system.

One of the best things about a trip out to Muangthong is a wonderful coffee shop called Faraday's, just a minute's walk from the away end. It was the perfect place for a pre-match slice of cake and a latte. Alas, I discovered from its Facebook page that Faraday's had closed down in mid-2021 (sadly another victim of Covid) We managed a quick bite to eat in a soulless Thai cafe nearby and made our way to the stadium, where a decent number of away fans had already congregated and were getting stuck into their late afternoon beers.

After milling around and chatting to old friends, there was the customary vaccine inspection to enter the stadium. Tickets for the away zone were a whopping 250 Baht, making Muangthong the most expensive place to watch football (for an away fan) along with Chiang Mai United.

Defender Suphanan Bureerat, who along with Aris Jarifovic has made the second highest number of appearances for Samut Prakan this season (28), was serving a one-match ban for his late red card against Chonburi. Suphanan would be disappointed to miss out on a trip to one of his old clubs. In Samut Prakan's first season (2019), he was loaned out to Muangthong and became a regular starter for The Kirins, making 27 league appearances and scoring one goal.

Noppon Phonkam, one of our better players in recent games, was missing from the starting eleven (possibly injured?) His place was taken by Kochalern giving the Laos international his first start for months. Japanese midfielder Daisuke Sakai was once more left on the bench. The biggest team news however was superstar Jaroensak declared fit after missing most of the campaign through injury and able to take a place among the substitutes. 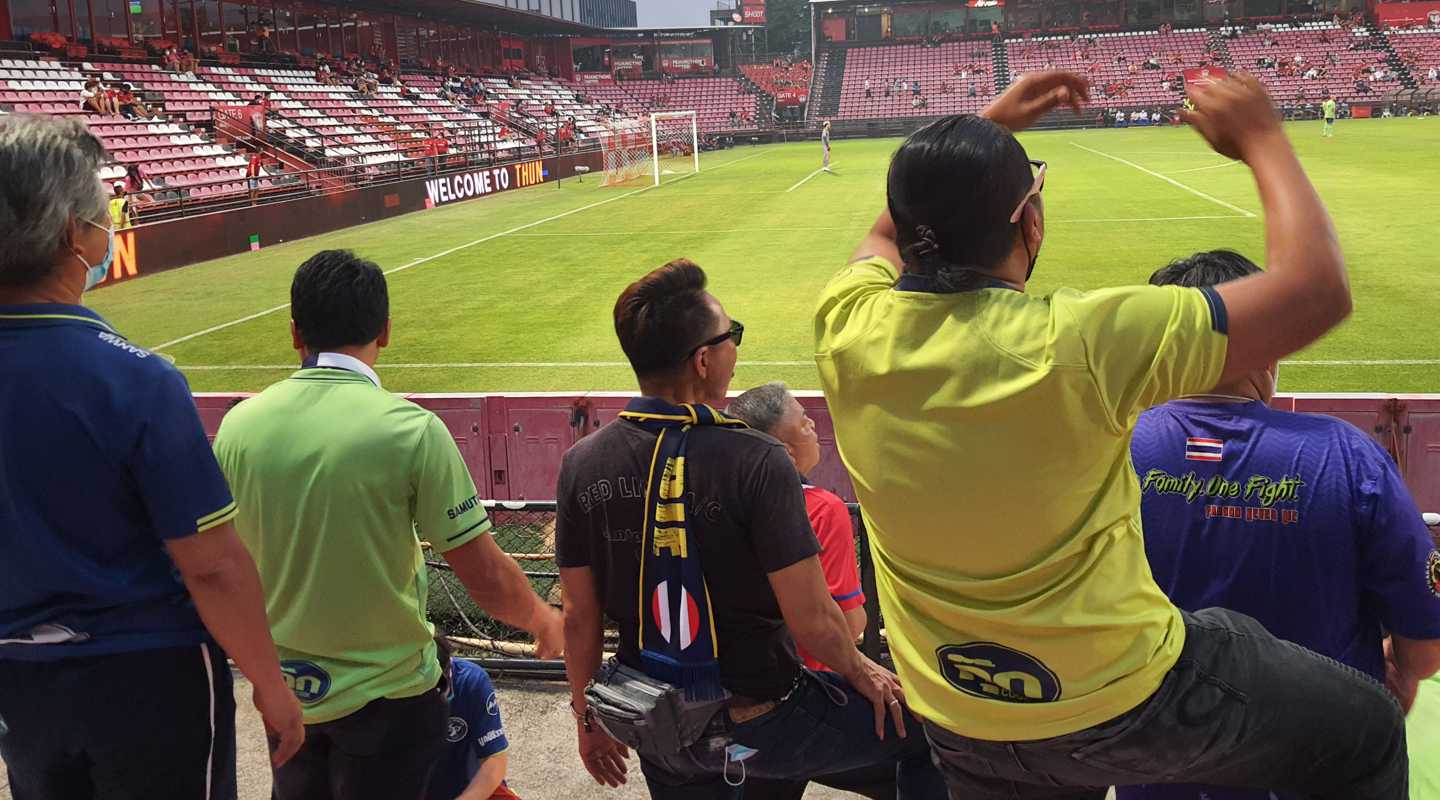 (You certainly couldn't fault our noisy away support this evening)

It's the hope that kills you. Any dreams of winning our last four games were destroyed before we'd even reached the quarter hour mark, care of a ruthless attacking display by the home side. Estonian striker Henri Anier opens the scoring on six minutes, latching on to a Willian Popp through ball and his swivel and shot flies past the outstretched hands of Pathiwat. The two foreign players combine once more for Muangthong's second goal as Popp skates through the Samut Prakan defence with embarrassing ease and sets up Anier for an easy finish.

The travelling Samut Prakan fans cast anxious glances at each other. It's not just the fact that it's already game over but Muangthong look superior in every department. This could well turn into a thrashing.

Anier has a glorious chance to complete his hat-trick on the half hour but blasts over. Willian Popp, with already two assists to his name, is finally rewarded for a fine first half display, tapping in at the far post after Samut Prakan keeper Pathiwat, forgetting everything he's read in the goalkeeping 101 manual, pushes a routine save straight back into the danger zone.

Outside the stadium during the interval, I got the chance to catch up with my football writer friend Gian, who I hadn't seen for over a year. Gian has acompanied me several times to Samut Prakan home games and well remembers some of the glittering displays of the first two seasons. He offers words of comfort inasmuch as a season in division two could be a fun and memorable experience. I appreciate he means well but the future for a Samut Prakan fan at the moment looks decidedly uncertain. 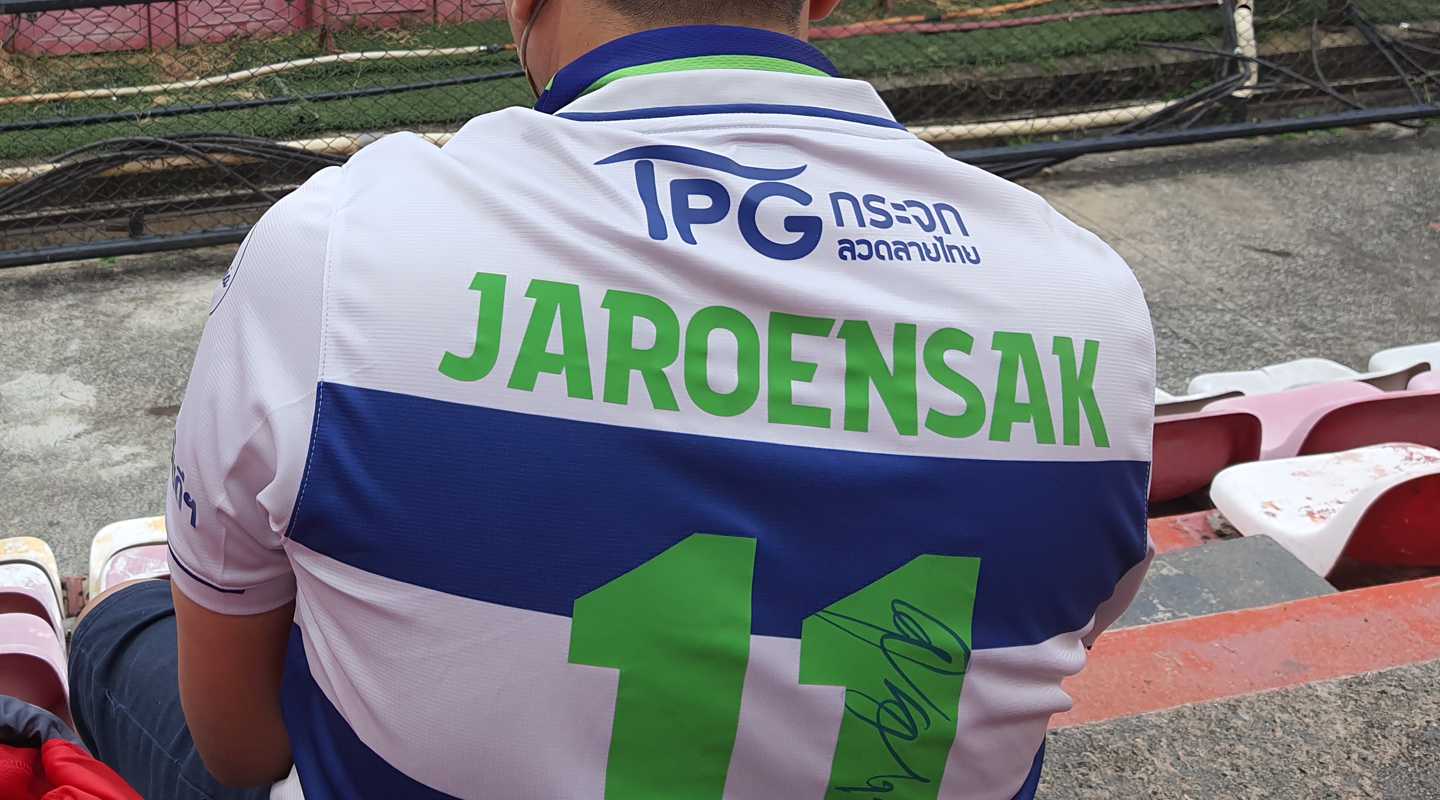 (Great to see him back)

The away fans finally get something to cheer as just six minutes into the second period, defender Saksit Jitvijan plants a header into the Muangthong net. With momentum swinging towards the visitors, Samut Prakan bring on both Daisuke Sakai and Jaroensak. It's amazing how the introduction of a star player, who's been absent for so long, can lift a bunch of team mates. As Jaroensak goes on some of his trademark mazey runs, the Samut Prakan supporters ramp up the noise level and we look a completely different team. And it's a Jaroensak cross that eventually finds Samuel Rosa who opens his Samut Prakan account with a well taken goal. 3-2 the scoreline and still over half an hour left on the clock. Who'd have thought it when the half-time whistle blew, but suddenly this is turning into one hell of a game.

On 78 minutes, William Popp brings down Samuel Rosa in the penalty area. The Brazilian striker is so convinced it's a foul that he ignores any appeals and remonstrations and carries the ball towards the penalty spot. VAR intervenes and says no.

Did our season well and truly end in that moment? Samut Prakan throw caution to the wind and go on a full-scale offensive, but that means holes are always going to be left at the back. Samut Prakan legend Teerapon Yoyei is introduced for the home side with seven minutes remaining and he's Johnny-on-the-spot to slot in Muangthong's fourth. Uzbek midfielder Mirzaev puts some gloss on the scoreline with a neat header as the clock ticks towards the ninety.

We lost this game in the first quarter of an hour. We gave ourselves a mountain to climb by conceding two early goals and looked like rabbits caught in the headlights. Muangthong just blew us away. The only real plus point of the evening was seeing Jaroensak make his comeback, oh and Samuel Rosa finally hitting the net for his loan club.  As for relegation, see below.

The relegation zone after the weekend games

With only three games to play and a possible maximum of just 31 points, I'm not even sure why I'm bothering to reproduce this now, such is the futility of the situation. Yes, there are a handful of teams we can still catch mathematically but realistically the only question remaining is who will be the third club to go down alongside Samut Prakan and Chiang Mai United?

Note that next weekend (16th / 17th April) Samut Prakan do not have a game but Nakhon Ratchisima and Ratchaburi play each other, Suphanburi are at home to Police Tero and PT Prachuap are also in action.

After yet another short break, we travel to fellow strugglers Suphanburi on Sunday 24th April.