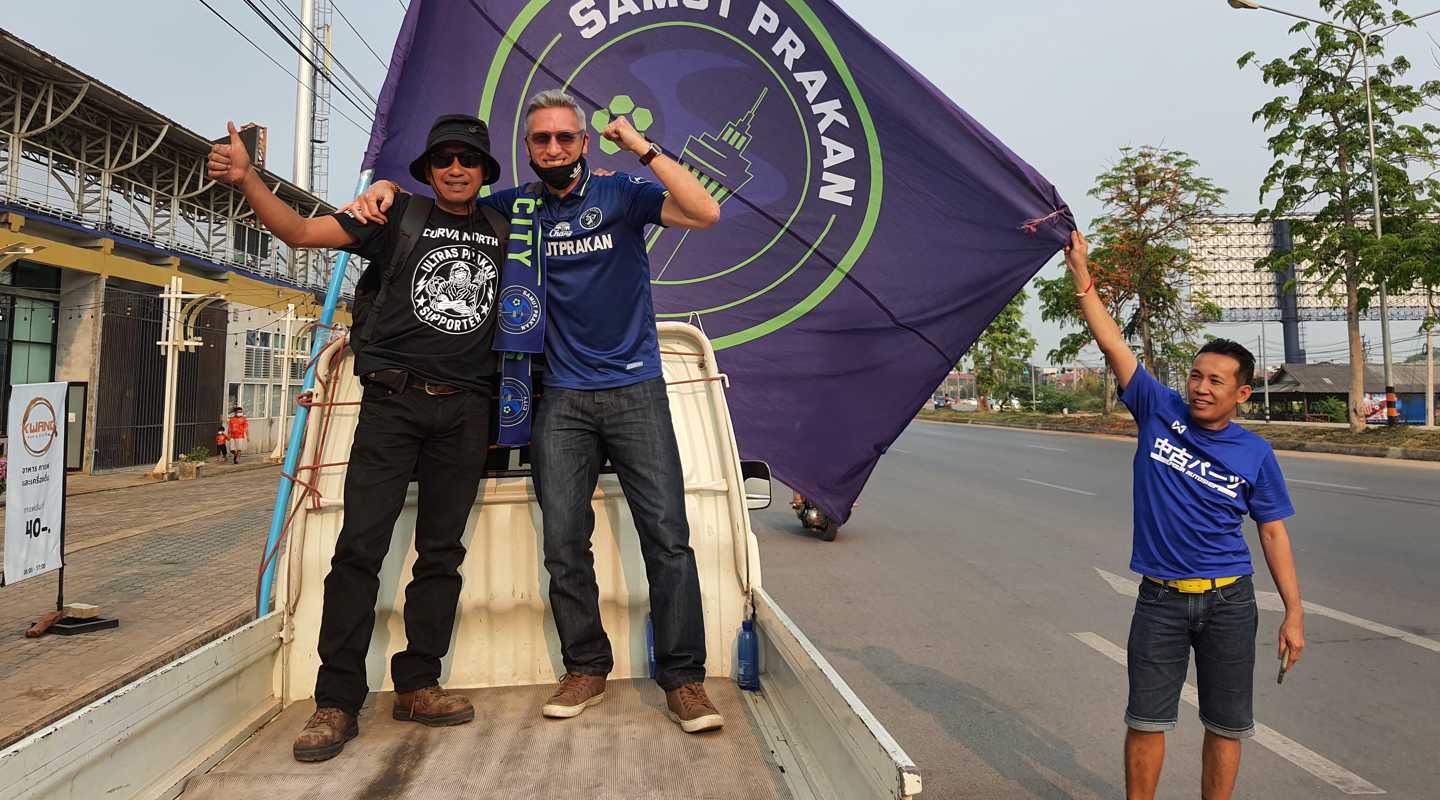 (Photo taken outside the Chiang Rai Singha Stadium in March of this year. Away to Chiang Rai was our final game of last season and we are back there to start the new campaign. Sadly, thanks to Covid, there will be no repeat of happy scenes like this for possibly the first month of the season at least)

The fact we are getting the Thai league season started is pretty amazing?

I still can't quite believe it given the current Covid situation. I would have bet serious money on the season not kicking off until early next year, but the Thai FA has pulled out all the stops and were clearly against delaying things any further. Fair play to 'em.

With Samut Prakan Province classified as a dark red zone (with the strictest Covid restrictions) what does that mean for its football club?

Basically, it means at this moment in time, Samut Prakan City can't play matches at home, so this fixture - originally scheduled to be a home game - has been switched with the opponent.

However, with the Covid situation showing signs of improvement, the government, the Thai FA and whoever else decides these things, are assessing matters on a week-by-week basis. As Thai football fans, we're having to grab whatever news and announcements we can and take things as they come.

It's not an ideal situation, is it?

Not for the dark red zone clubs, no, but who knows? we could be back to normal in a few weeks - or we could stay like this for the rest of the season. No one can predict how things are going to pan out but I applaud the Thai FA for coming up with a short-term solution and giving the fans an opportunity to watch some footie - even if it's only on TV.

Presumably no away fans are allowed to attend matches?

It's very difficult to stay on top of the rules and regulations at the moment. It seems that stadiums which have the go ahead to hold matches have two choices; they can either play the games behind closed doors or allow 25% of the capacity, with strictly no away fans allowed. The final say rests with the governors of each specific province.

As an away fan from a dark red zone province, I certainly won't risk travelling to a game until the situation improves and the attendance rules are made crystal clear. All it takes is one jobsworth either at the airport or the stadium to wreck your plans. It's just too much of a gamble.

As it turned out, Chiang Rai were given the green light to allow fans up to 25% of the capacity, but strictly no away supporters.

It's one of my favourite stadiums in one of my favourite cities in Thailand. There are plenty of affordable mid-range hotels, it's easy to get around by Grabcar, and there's a great little Indian restaurant by the clock tower! It all makes for the perfect football weekend. Unfortunately, it's not going to happen this season sadly, unless we draw Chiang Rai in a cup competition.

Moving on, there's been no pre-season in terms of playing friendly matches?

No, but I don't think we can complain too much about this: it's been the same for nearly all the Thai clubs. A friendly match or two would've been nice though because we are almost a new-look team compared to last season.

Chiang Rai United already have one competitive match under their belts, having played BG Pathum in Thailand's equivalent of 'the charity shield' (FA Cup winners v League winners) on Wednesday evening. I watched the game on TV and thought despite losing 1-0, Chiang Rai were the better team. Let's see how much the 90 minutes has taken out of their players. 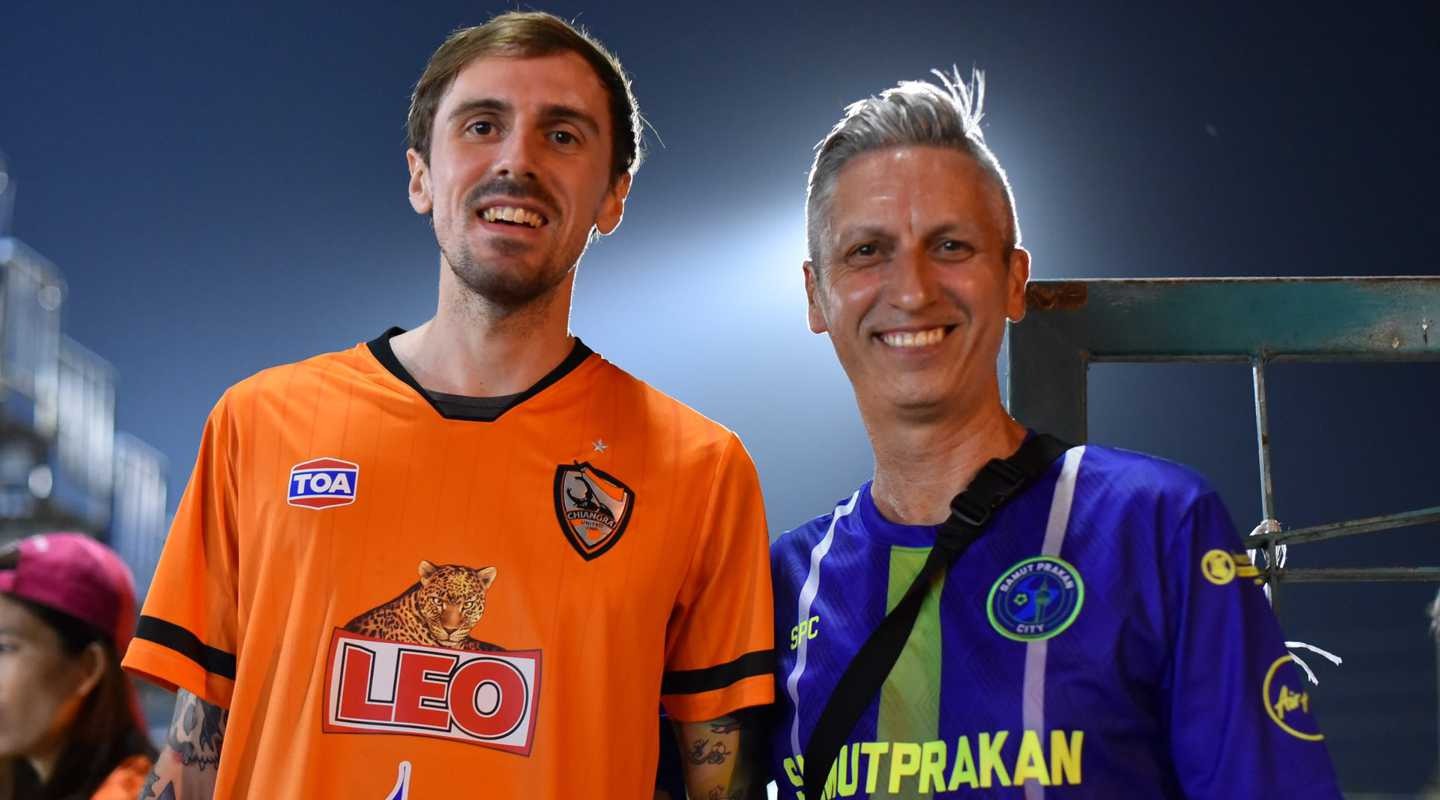 A few words from Chiang Rai fan (and my good mate) Alec Peeples, on how he sees Chiang Rai's season going.

"Without being overly dramatic, I think this is a big season for Chiang Rai.

We shocked the league by winning the title and since then have failed to establish ourselves in any definitive way. Our pragmatic style of football isn't getting quite the results it used to and I don't think it necessarily fits the strengths of our current batch of players. We have let go of one of our young talents in Chaiyawat and have not brought in any clear first-team talent.

That said, aside from the loss to Suphanburi, we ended last season on a great run of form. We won the FA cup and we had a decent showing in the ACL. I think we have a strong squad despite the lack of reinforcements and I fully expect us to have our sights on another cup trophy and remain in the title conversation (realistically I'm not sure if any team can dethrone Bangkok Pathum). If we have a lackluster season, I think some serious questions about the direction and long-term intent of the club need to be raised" 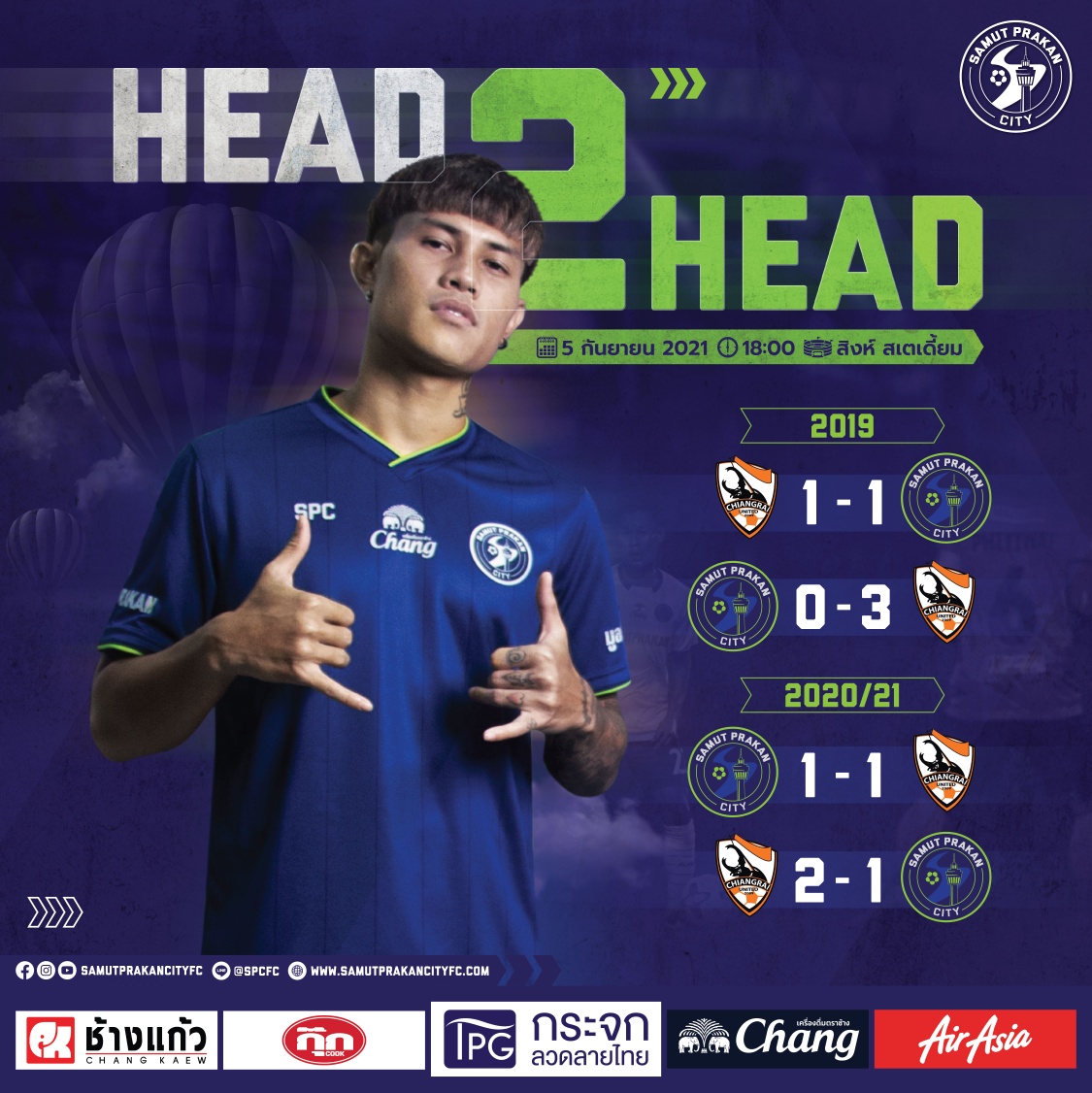 Thanks, Alec. So what's the past record between these two clubs?

As Samut Prakan City, the clubs have met four times - with two victories for Chiang Rai (including a 3-0 win at Samut Prakan in 2019) and a couple of 1-1 draws. So not a team we do particularly well against.

I don't see our first ever win against The Beetles coming in this game. We'll need time for all our new faces to gel, so I'm going for a 2-0 defeat.

To the match itself and a few new faces in the starting XI?

Samut Prakan handed debuts to four players. Chaiyawat Buran lined up in defence for a quick return to his former club. He was joined in the back four by Srayut Sompin, who joined us from Buriram. Daisuke Sakai, the second Japanese player on our books, earned a start in midfield, and of course, the big man Eliandro up front to partner new club captain, Chayawat Srinawong.

Samut Prakan fans would have been crowding around TV sets and holding their breath in anticipation. How quickly would this much shuffled line-up settle into the game? They needn't have worried; the visitors in blue looked confident and assured from the off, and bossed most of the first period. In stark contrast, Chiang Rai looked lethargic and disinterested, perhaps still nursing a hangover from Wednesday's defeat against BG Pathum.

On ten minutes, Eliandro almost got his Samut Prakan career off to a dream start but missed a golden opportunity, heading wide from a pinpoint Jaroensak cross. The away team turned up the heat with a succession of corners as the silver-haired Chiang Rai boss, Emerson Pereira, paced the touchline and shook his head in disbelief at how poorly his charges had started.

Chiang Rai's best chance came mid-way through the half but the breakaway counter-attack was thwarted by an alert Pathiwat, dashing from his penalty area and hoofing the ball into the night sky.

As the clock ticked down, Chayawat Srinawong, relishing his role as the new captain in place of the departed Peeradol, flicked an effort just past the post and another decent chance went begging.

As the players trudged off for their half-time pep talks, no prizes for guessing which manager would be the most satisfied.

Samut Prakan once again started brightly. Captain Chayawat fizzed a shot over the crossbar to cap a slick Samut Prakan move, while the unusually quiet and subdued Bill Rosimar, will feel he should have done better with a header at the other end.

The opening strike came on 59 minutes, a delicious swivel and volley from Sivakorn Tiatrakul to put the home side a goal to the good - clinical finishing from a player with almost a hundred Chiang Rai appearances to his name.

The goal, while not exactly against the run of play, seemed to knock the stuffing out of the visitors and a number of Prakan players began to look leggy and jaded, with target man Eliandro becoming increasingly isolated.

It was going to take a moment of magic to drag Samut Prakan back into the match so up stepped Chaiyawat Buran, on his return to old haunts, to whack in a long range screamer, followed by an understandly muted celebration that smacked of both respect and disbelief.

Samut Prakan's tails were up now. Why go home with a point when you can take all three? Just five minutes later and it looks a distinct possibilty as Chayawat caps a fine performance with a captain's goal - a sublime sidefooted lob into the top corner.

The joy is however, disappointingly shortlived, as Chiang Rai immediately break down the other end and force a corner. The Samut Prakan defence switch off as the inswinging cross evades them all and Bill Rosimar, who else?, is johnny-on-the-spot to poke home a leveller.

Samut Prakan make a double substitution to see out the final five minutes and Bill Rosimar fluffs the last chance of the evening for the home side. He broke our hearts with a late winner last season: lightning wasn't about to strike twice. 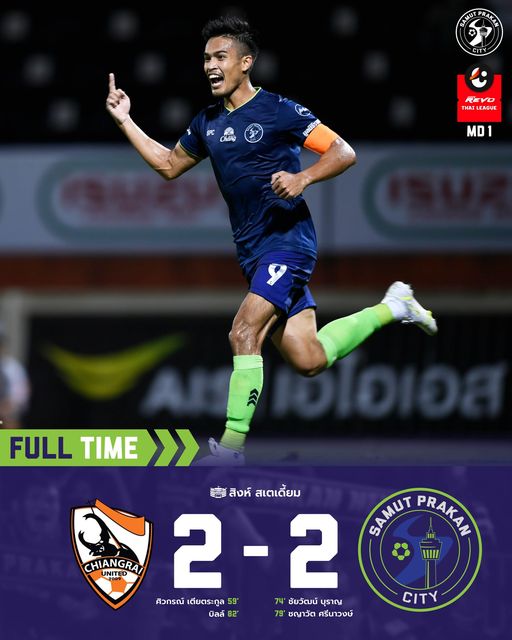 A terrific team performance that far exceeded my expectations and suddenly I have a new-found confidence about the long season that lies ahead. I still think the squad needs strengthening but a point away from home at one of the best teams in the Thai premier league? - I'll certainly take that for now.

There were good individual performances all round but I'd reserve a special mention for the skipper, Chayawat Srinawong. Sometimes you give players that extra responsibility and they step up to the plate. That's exactly what we saw from this young man tonight.

On a final note, there were just 262 fans at tonight's game - a far cry from the 2,500 allowed. Maybe Chiang Rai Province just isn't getting needles into arms fast enough.

We travel to newly-promoted Nongbua Pichaya next Sunday (September 12th). Play like we did this evening and you feel that three points are well within our grasp.