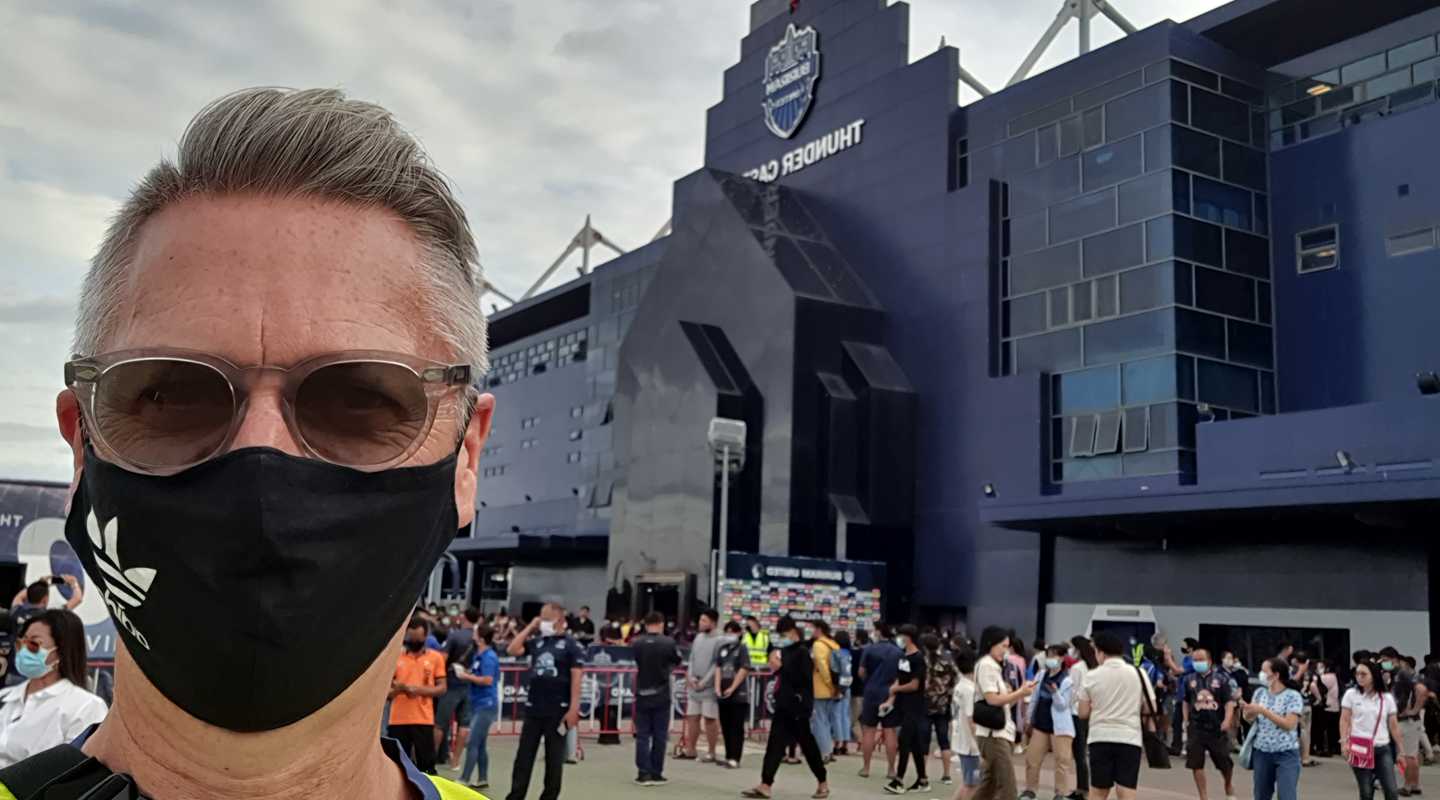 (We beat Buriram 3-1 at the Thunder Castle back in late November. Could we do it again on our own patch?)

Buriram at home. Always one the Samut Prakan supporters look forward to?

I would say it's the most eagerly awaited fixture of the season, regardless of how well or how badly Buriram are doing in the league.

After a bit of an iffy start where they lost half of their opening eight games, they've shown a massive improvement in terms of consistency and currently lie in second place, having won 12 and drawn one of their last 13 matches. But second place is never good enough for a club with the size and set-up of Buriram. These guys want to be champions!

And who was the last club to beat them?

Samut Prakan back in late November. What a night that was! When I get round to looking back over the year and doing my season review, I'm pretty sure that game is going to be right at the top of the highlights reel.

How did this fixture go last season?

Buriram went home with all three points from a comprehensive 4-1 win. It was a 5,000 sell-out crowd, a terrific atmosphere, but not a great match from Prakan's point of view. We had a man sent off in the first half and went in at the interval two-nil down. Although Ibson Melo then dragged us back into the contest early in the second period, two more Buriram goals in the final 20 minutes killed us off. 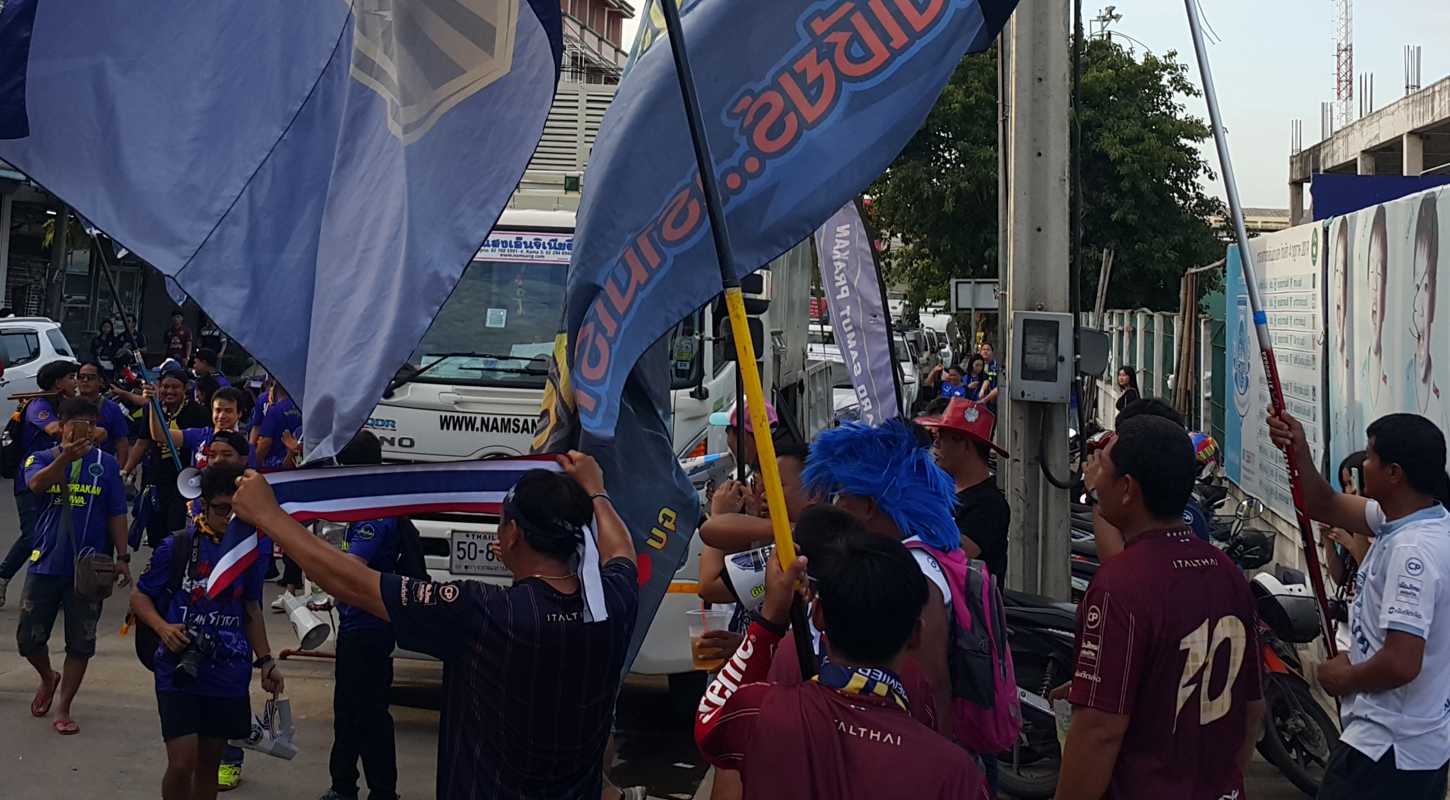 Oh, before we go any further, it's farewell to Trat?

Trat's 2-1 defeat at home to Prachuap on Saturday meant they would be joining Rayong in the second division next season. I'm sad to see them go because I thoroughly enjoyed my first ever trip to Trat this season. Nice stadium, friendly fans and a peaceful town. I wish them all the best in their fight to get back into the top division. 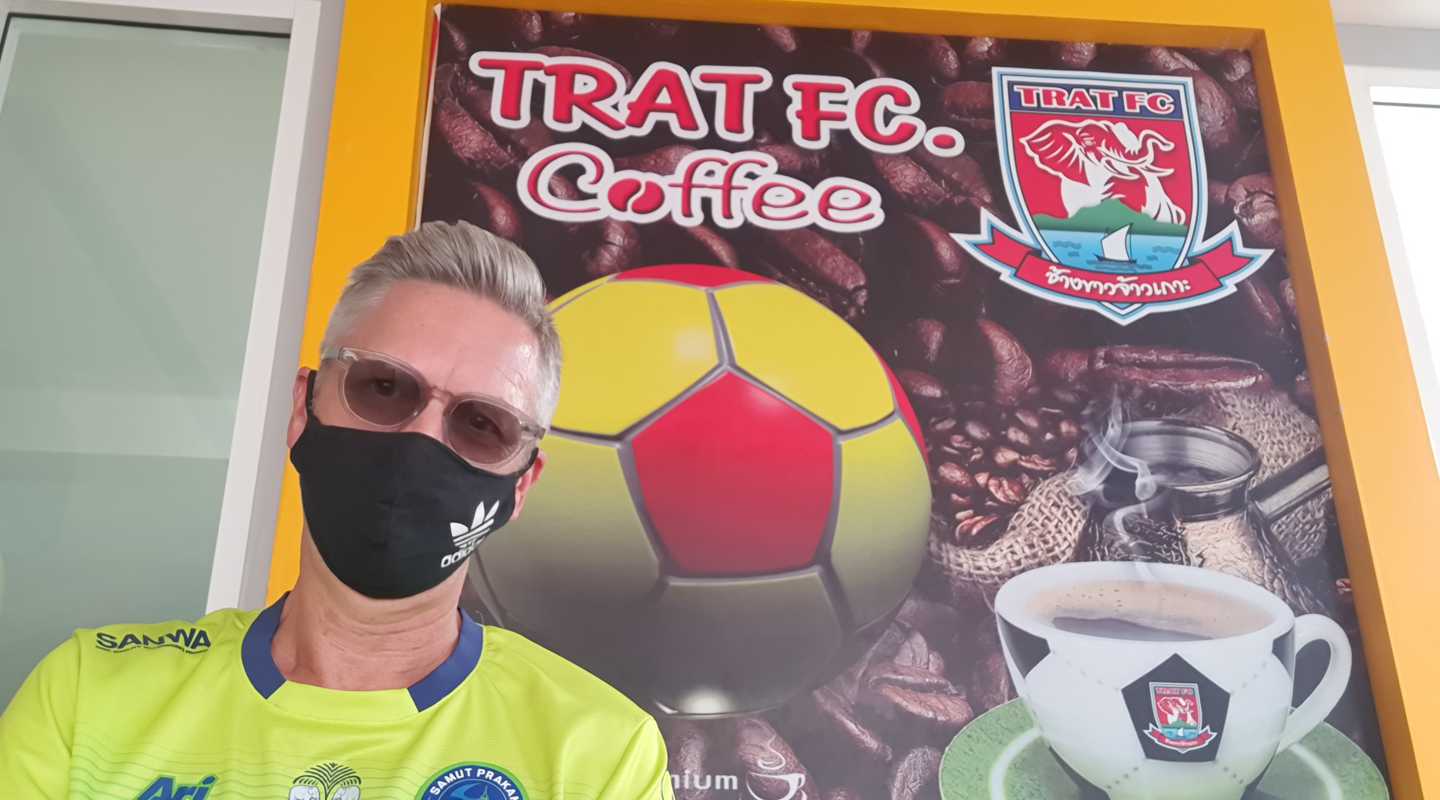 To the Buriram game

Our stadium capacity allowance for this one was 50% so whatever test we had to pass in the last home match - when the allowance was just 25% - we obviously passed it!

This meant there would be around 2,550 seats available and 10% of that would be given over to travelling Buriram supporters. When I checked the online system, tickets were selling fast with already several zones sold out.

Indeed, when we arrived at the ground some 90 minutes before kick off, there was already a decent vibe. It felt just like the old days of last season and it was great to feel the buzz again. The official attendance given at the end of the game was about 2,200 and both sets of supporters played their part and contributed to an exciting atmosphere - the kind of atmosphere we'd been missing for quite some time. 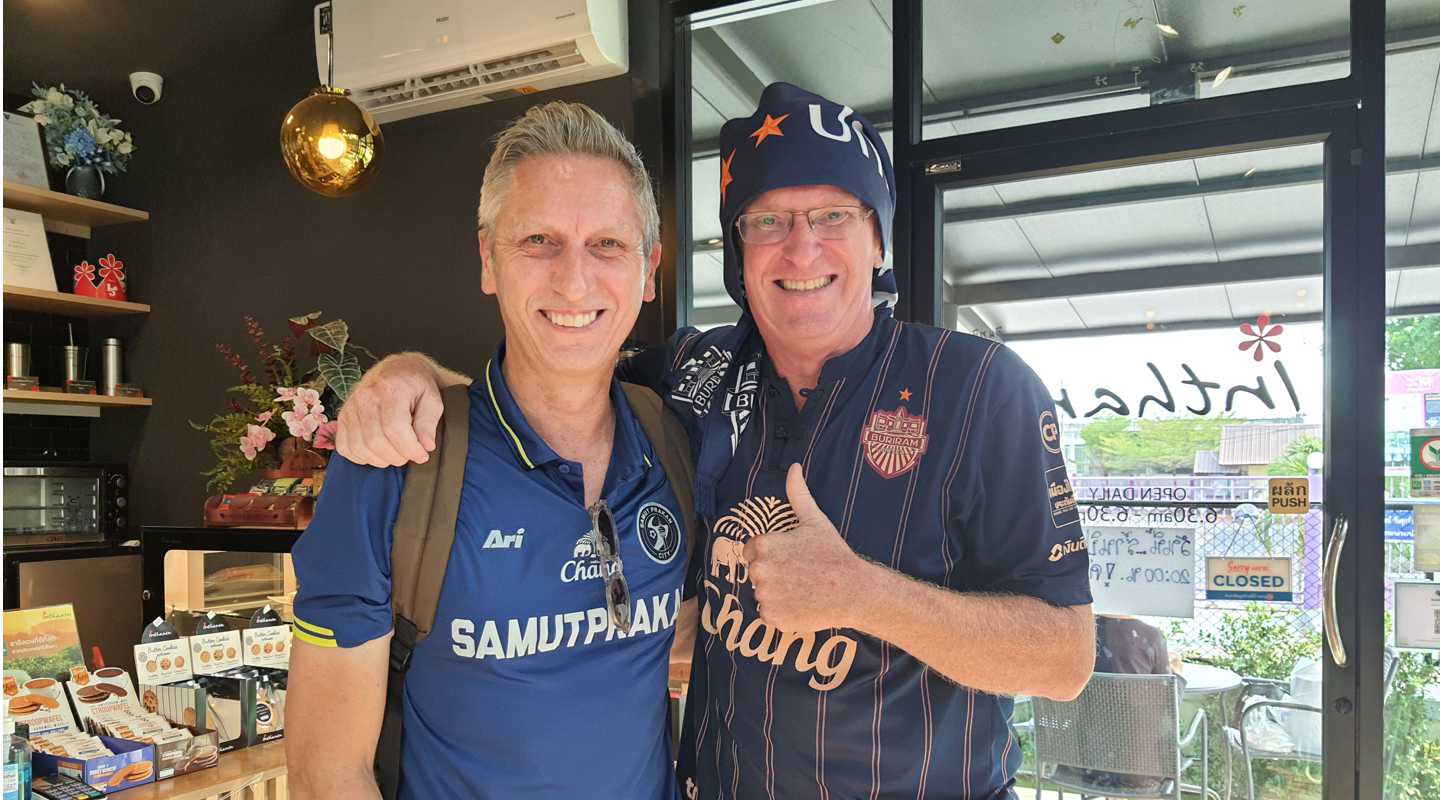 I also got the chance to meet up with my Buriram pal, Jamie, for a quick drink at the new Inthanin Coffee Shop near the ground and then took him into the home fan zone, where he got to pose for photos with Samut Prakan fans (now isn't that preferable to getting beaten up outside an English ground?) and enjoy some free ice lollies given away by one of the match day sponsors.

I also had a brief chat with our injured Japanese midfielder, Yuto Ono, one of several absentees from the Samut Prakan starting line up that also included Toti and Jakkapan (both suspended). 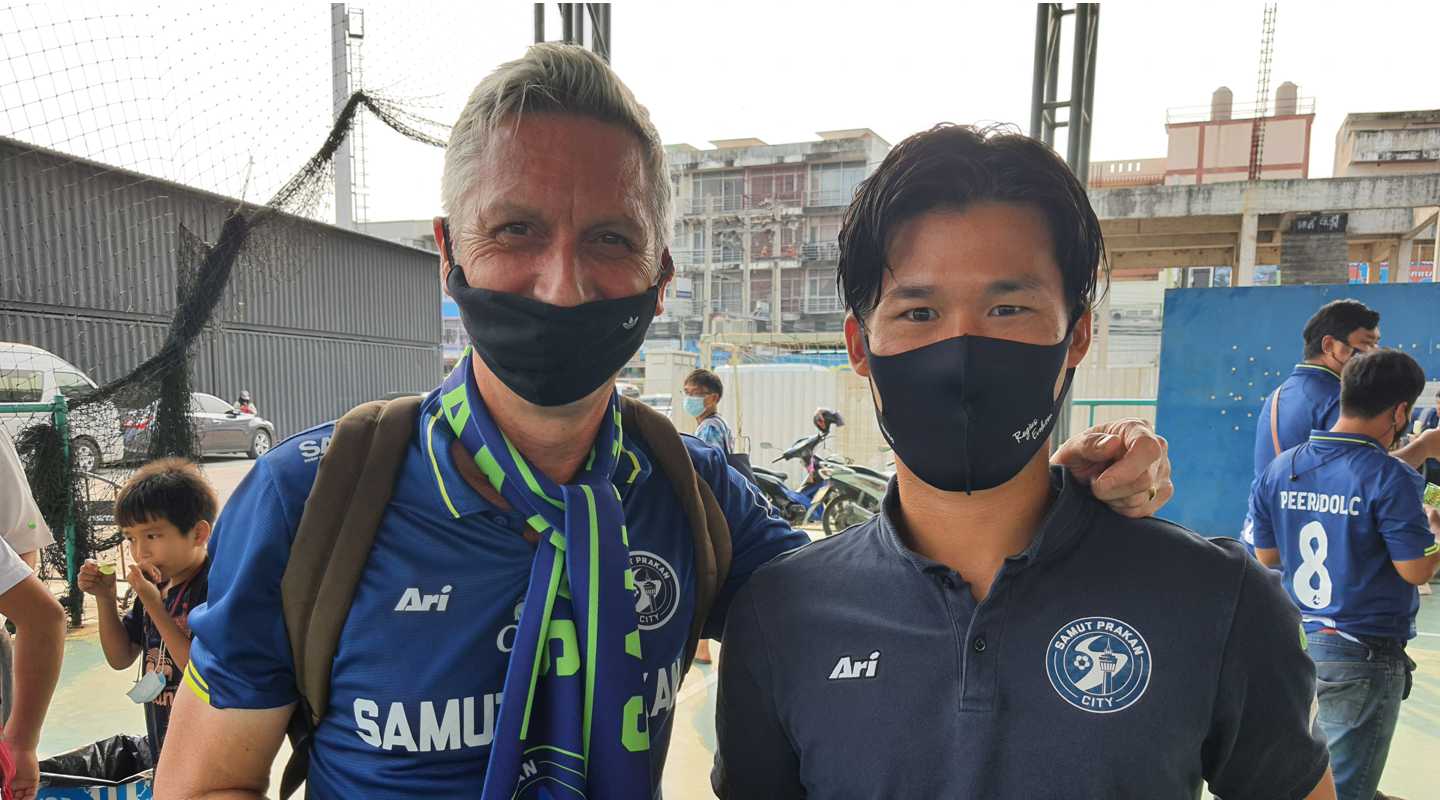 The game kicked off at 5.10 pm in bright sunshine but with a light breeze making it a lovely evening for a football match. The first half was an evenly matched affair with few opportunities for either side - the only goal coming from the home side on 24 minutes. Jaroensak whips in a corner and there's Aris Jarifovic to outjump the defence and glance in the header for a proper centre-half's goal.

Buriram's best chance of the half falls to Samuel Rosa but the Brazilian striker's header is cleared off the line quite brilliantly by Nopphon, making a rare start for the home team this evening.

Half time and it's 1-0 to The Sea Fang. You felt like it was going to be a long 45 minutes plus injury time ahead - and that's exactly how it turned out. 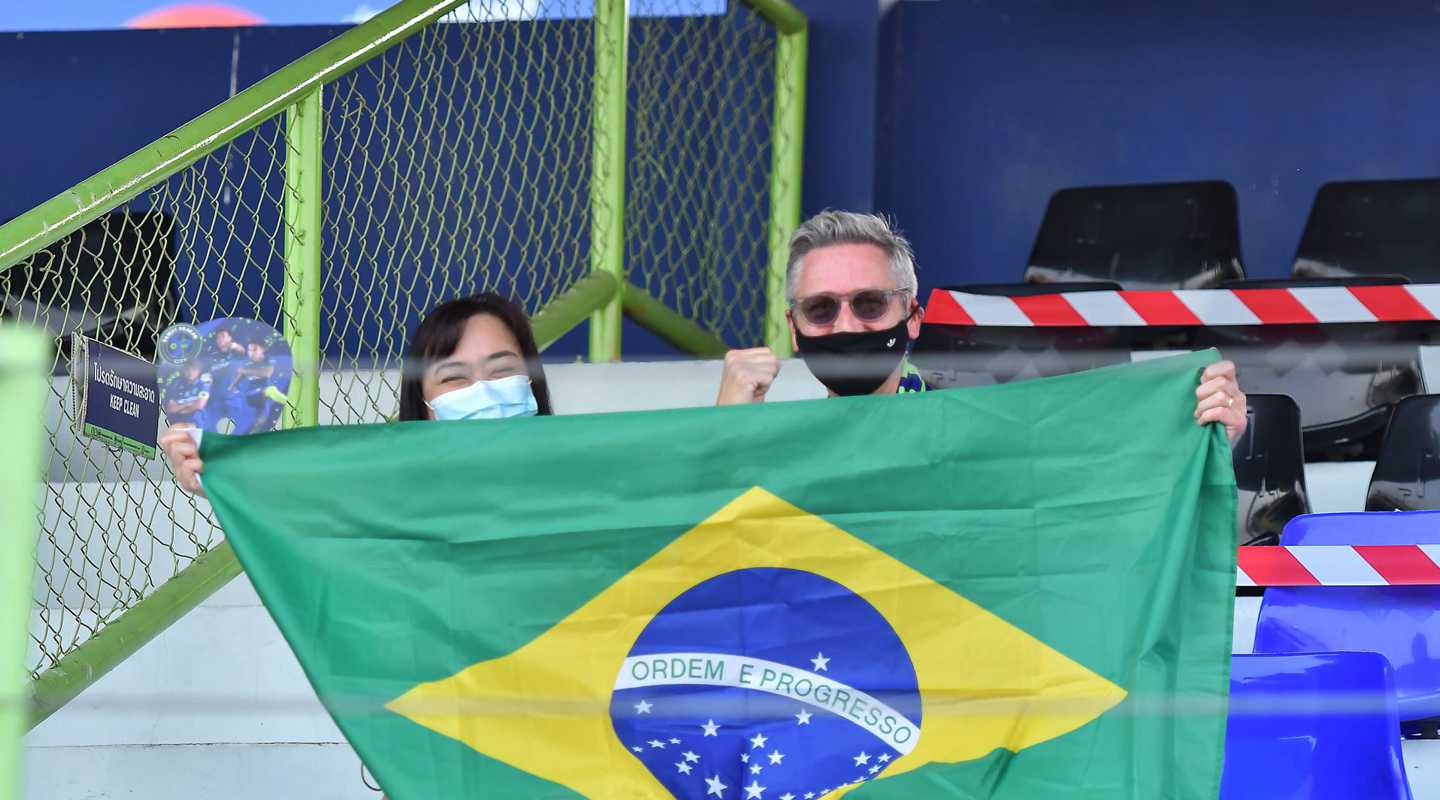 (Come on Tardeli! We were in the ground early as usual but the attendance of over 2,000 provided a great atmosphere)

Sometimes you have to tell it like it is and in that second period, Buriram absolutely battered us. We couldn't lay a glove on them. We couldn't seem to string two passes together or hold the ball up in midfield and just retain a little composure. Buriram attacked in numbers and peppered the Samut Prakan goal. It was no surprise Pathiwat, the Samut Prakan custodian, was awarded our man of the match again.

We held out for 87 minutes but just as Samut Prakan fans were glancing nervously at the stadium clock and sensing a probably undeserved victory, Buriram draw level with a penalty. After a terrific double save from Pathiwat, VAR steps in to spot a handball from a Prakan defender and Maicon, a second half subsitute for Buriram, strokes home the spot kick.

If there's one thing worse than conceding a penalty in the 87th minute, it's conceding another one in the fourth minute of injury time. Buriram's Supachai Jaided, a late second half sub, falls over in the penalty area and unlucky Prakan defender, Saksit is judged by VAR to be the man responsible. It looks an awfully harsh decision and minimal contact. Most of the home players are beside themselves with rage, with Aris Jarifovic leading the animated protests. Maicon slots home an even better penalty than the first, sending Pathiwat the wrong way and sending Buriram home with all three points.

The final whistle blows and the atmosphere turns toxic as home fans stand on seats and aim cries of 'cheat' and a volley of abuse towards the Buriram owner standing on the touchline. The referee is given a police escort from the field of play. As I leave the ground, a young Samut Prakan fan whose face I know (he's no older than about 15) comes up to me and screams 'fucking bullshit!'. There's a lot of anger in the air and I'm relieved to get back to the car. 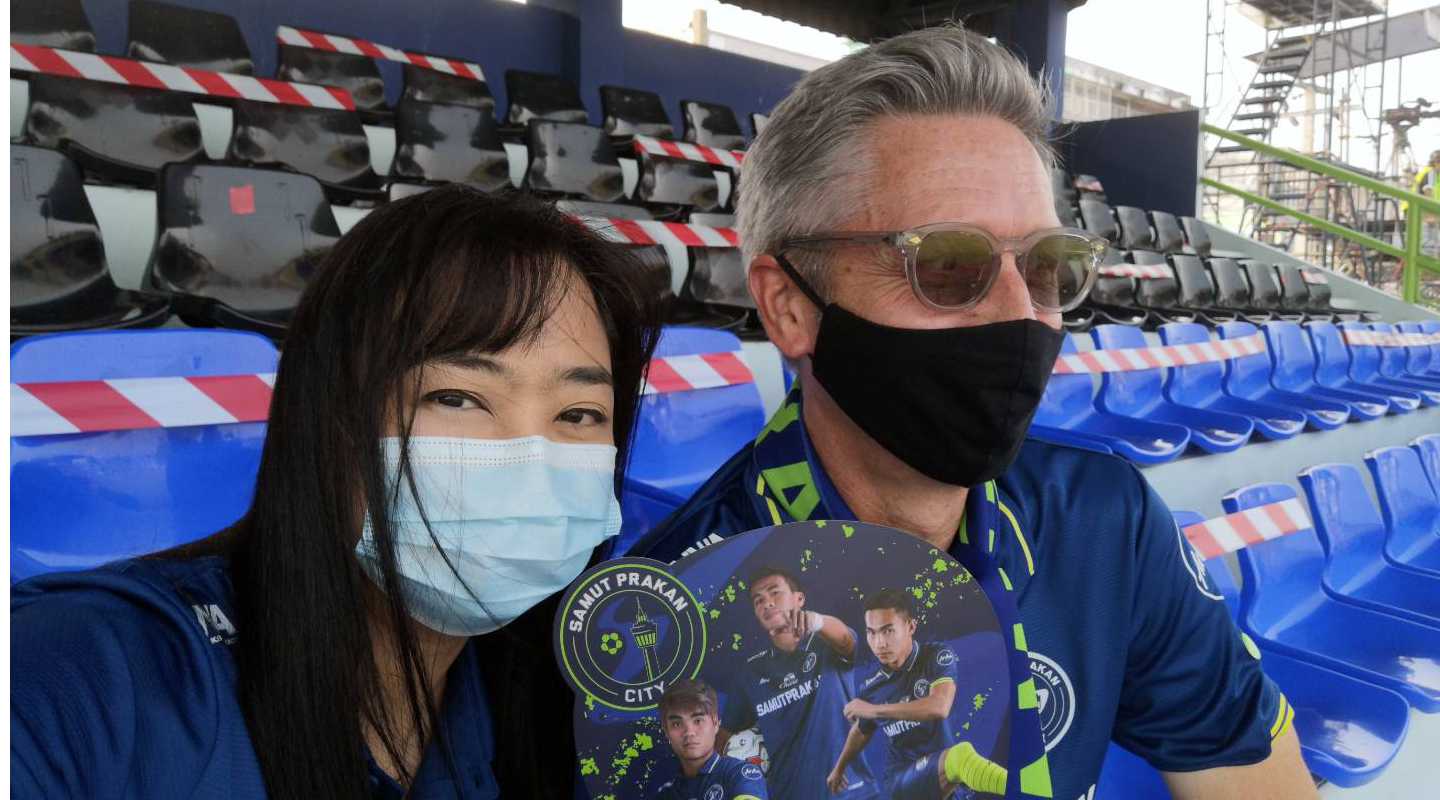 Although the stadium was only 50% full tonight, it felt like far more. It was great to enjoy the kind of atmosphere that we tasted at so many home games last season. And that's the one very positive thing I''m going to take away from tonight's match.

I've watched the penalties back a number of times on TV and I'm still undecided on the second and winning spot kick. I'm not downhearted about the result because for me this game was a free hit. All I asked was that we put up a better fight than in last season's 4-1 defeat - and we did. Buriram totally dominated the second half though and deserved at least a draw.

Why was the game a free hit? - because at the moment, I don't think we're good enough to get that 4th place spot. I feel there at least six or seven teams in the premier who are stronger than us. We're closing the gap, we're getting there, but we're not there yet. We're 8th in the league and that's where quite honestly, we deserve to be. It's still a great achievement given the size of our club and our squad.

Sometimes, I'm just happy to be able to support a club who are still in the top flight. Fans of Trat and Rayong can't say that anymore.

Yes, hotel near the ground already booked. Looking forward to it. I like going to Chonburi.