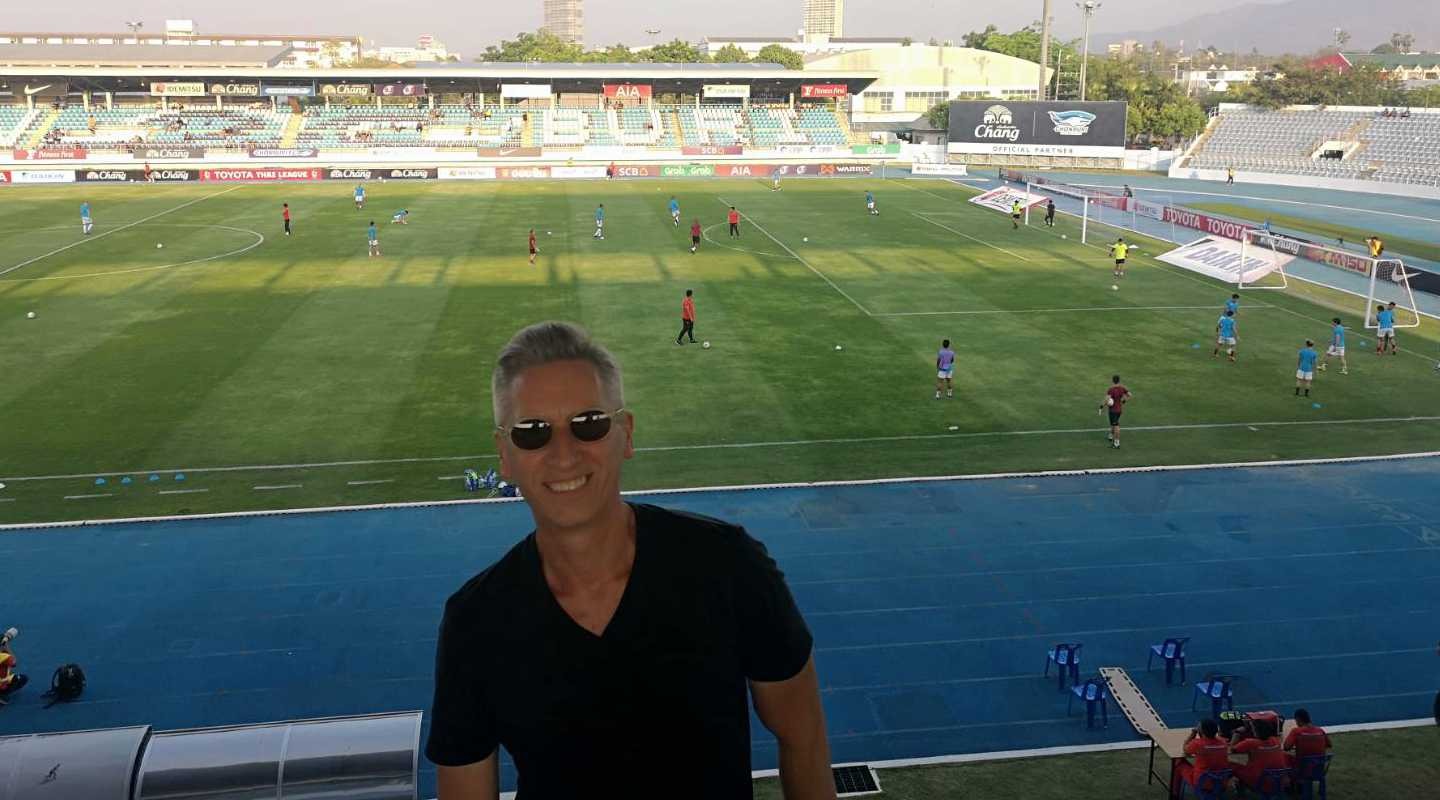 There's a special fondness for Chonburi away?

There is indeed. It was the stadium where I saw my first ever Thai League game (Chonburi v Suphanburi in June 2018) and it was where I saw my first away match as a Samut Prakan supporter back in March 2019. Bloody hell!, was that really two years ago? I remember the day vividly because we didn't have any replica shirts to wear and I sat in the main stand among the Chonburi supporters.

And you remember the score?

Yes, a 2-0 win to Samut Prakan with Ibson Melo grabbing a brace. It's amazing how many times that guy's name still comes up in these blogs. 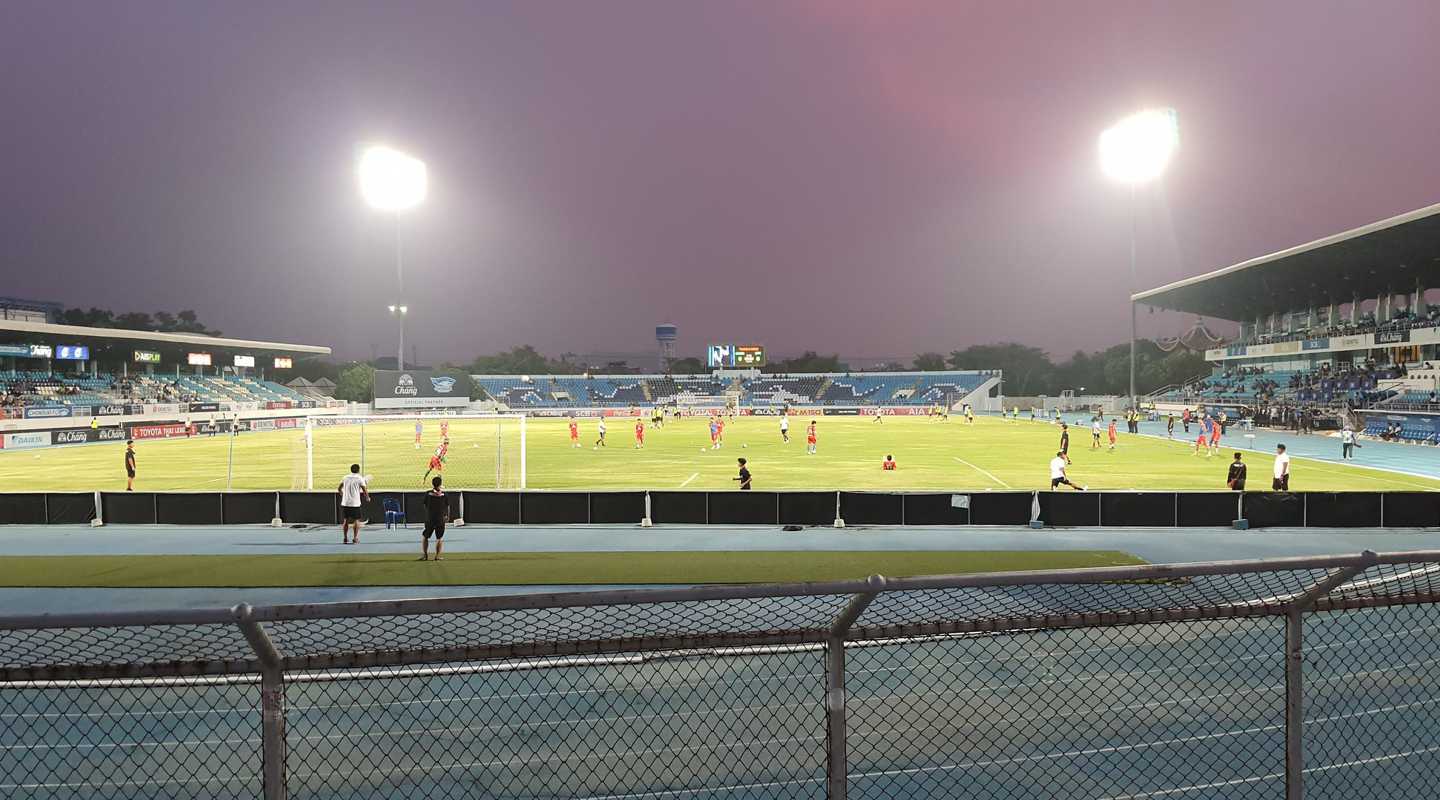 (The view from the away end at Chonburi is not great to say the least. You are a long way from the action once the game starts. But I always think it's a smart ground and could be up there with the best in the league, especially if they tarted up the running track - or better still got rid of it!)

The Sharks have had a poor season?

There was talk of possible relegation just a few months ago but thankfully, they've steadied the ship. They currently lie in 12th place but seven points above the bottom three.

21 of their 30 points this season have come from home games so although they're dreadful on the road, they have won over half of their matches at the Chonburi Stadium.

The Sharks won't go down, and I'm delighted to say that because I feel anyone who loves and follows the Thai League owes Chonburi a debt of gratitude. When they became the first provincial club to win the league over a decade ago, that was the start of the Thai football boom. In many ways, we are where we are today because of Chonburi. There's something not right about having them scrapping against teams in the unglorified wilderness of the second division.

Chonburi is a comfortable 80-minute bus ride from Bangkok's Ekkami Bus Terminal and you have a good choice of transport options (minivans, minibuses and large blue and white government buses) I got to Ekkami around 11.00 am and was leaving town on a 48-seater bus within 15 minutes. There were barely a dozen passengers on board so plenty of room to stretch out. When we reached Chonburi, the driver kindly dropped me off at the roadside opposite the Central Plaza shopping mall, and from there it was a five-minute taxi ride to the hotel. 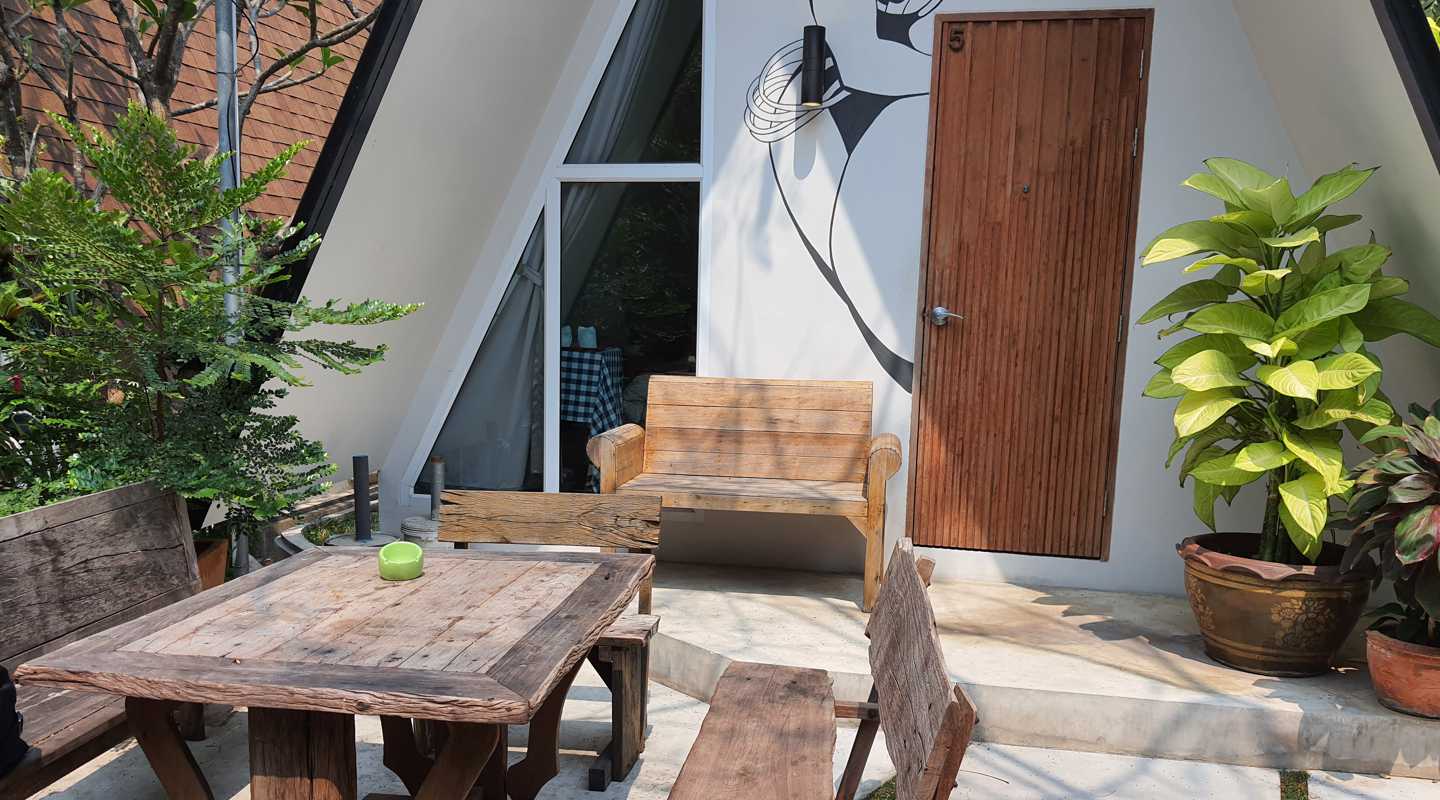 I booked a night at The Mug Hotel and Resort, which felt strangely out of place in the suburbs of a large city. The cute wooden chalets go for around 920 baht a night and it's probably the closest accommodation to the Chonburi Stadium (just a five-minute stroll away) It was OK for one night but the air-conditioning could've been more powerful (those chalets seemed to absorb the heat during the day) and there was no kettle to boil water and make a coffee (not in the room anyway). Always two big minus points if I'm evaluating a hotel room.

To the match itself. Good away support?

Fantastic! I would say up there with the away game at Buriram in terms of numbers and noise created. They never stopped singing and clapping for the whole 90 minutes. And there were four of us there from the 'expat supporters club' as well! It would be so good if we could get more foreign supporters to swell the ranks. 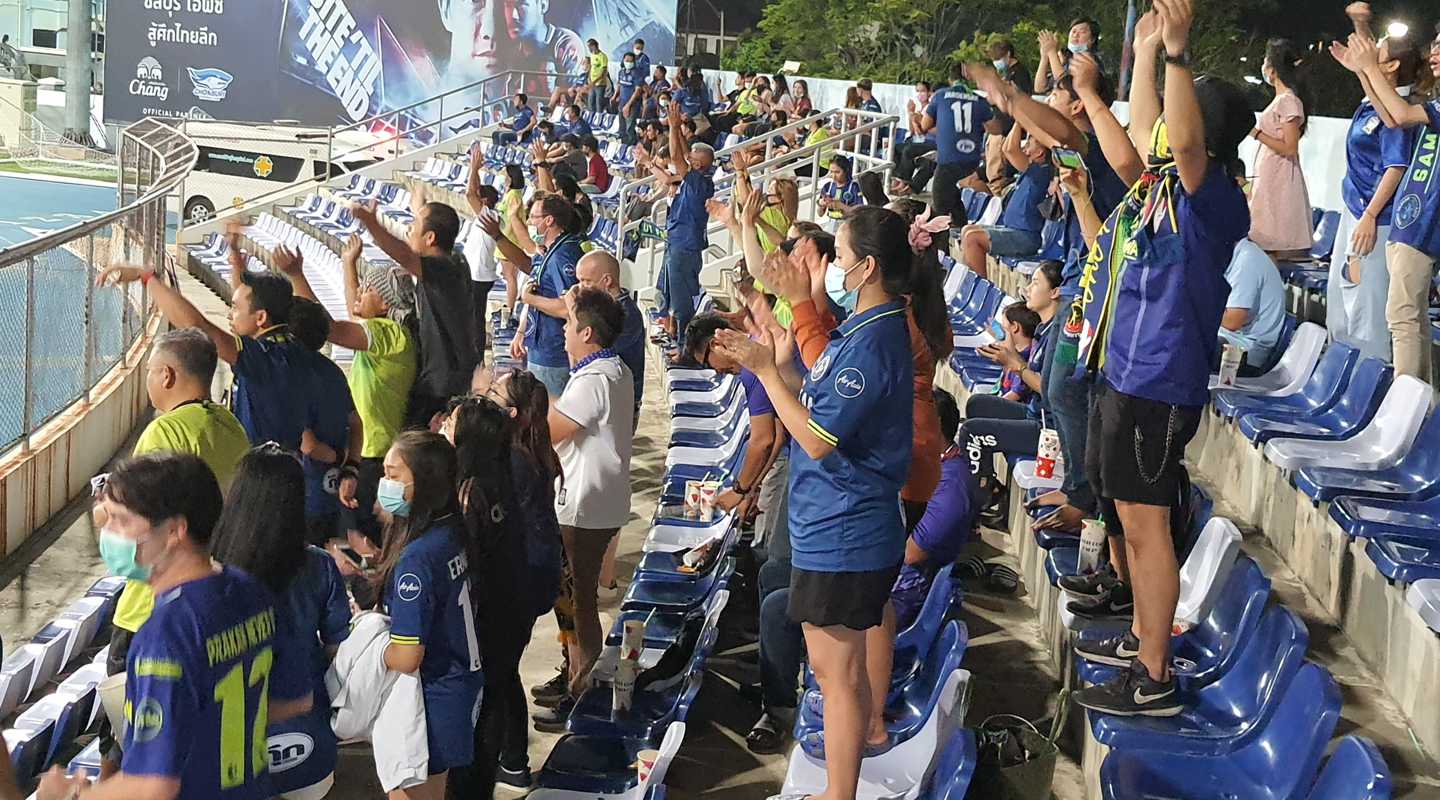 Jakkapan and Toti returned to the starting line-up but there was no Captain Peeradol (suspended?) and Yuto Ono was still out injured. There was also a first start for Singaporean midfielder, Zulfahmi.

Samut Prakan completely bossed the first 20 minutes and were rewarded with a goal from Tardeli (his 22nd of the season) after a dreadful error of misjudgement from the Chonburi keeper presented the Brazilian striker with a simple tap-in.

Chonburi bucked their ideas up and came into the game more but lacked any kind of penetration. The rest of the half generated into a midfield stalemate with both sides surrending possession cheaply. The visitors went into the interval with a slender one goal lead but will have felt they could have added at least a second.

The second period followed much the same pattern as the last game against Buriram, with Samut Prakan just not turning up. Chonburi spurned some gilt-edged chances and strikers in better form would surely have punished us. The second half wasn't a great spectacle in all honesty and Chonburi were much the better team - but it ended on a high for the Samut Prakan travelling support as Jaroensak finished superbly in injury time to add a second and give us a repeat scoreline of last season.  Watch the match highlights.

That's four times now we've played Chonburi as Samut Prakan City and we have a 100% record.

A final word on The Sharks

Chonburi must be one of the most 'gentlemanly' teams in the Thai Premier. Their players don't get involved in any kind of 'shithousery' like rolling around on the floor feigning injury or diving or shirt-pulling. They just get on with playing football. Even though tonight's game wasn't a great watch, at least it flowed. I applaud the players and manager for adopting such a fine attitude. Of course, there will be those who say perhaps that's the reason they find themselves in such a lowly position - they are too nice a team. But what a shame it would be for Thai football if that were the case! 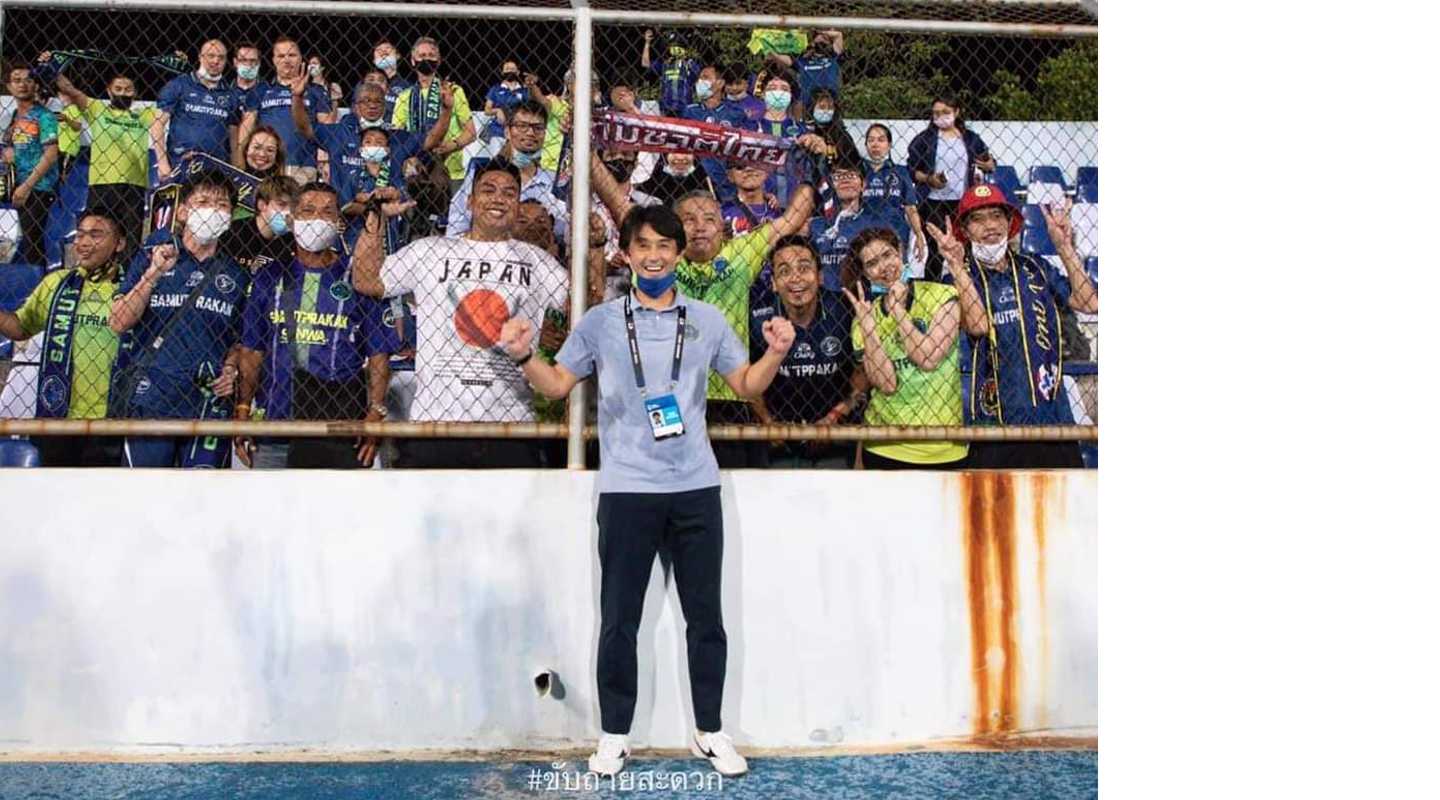 (We love our manager, Ishii-san)

Journey back to Bangkok

I was pleased to discover that Grab Car operate in Chonburi so I called up a driver to take me the couple of kilometres to the bus station, where the nice young lady who ran the hotel told me I would be able to get a 'big bus' back to Ekkami.

Chonburi's 'bus station' is little more than a hut by the side of the road with a gravel car-park behind, but the lady who runs the show was blindingly efficient. "You want go Ekkami? 83 Baht please. Next bus coming at 10.40. Big bus have many seats" Unfortunately, I'd probably just missed the last one and had almost an hour to kill but there was a Tesco Superstore next door so I sat in the food court, sipped a cappuccino as slowly as I could and ponced off the air-conditioning. The bus rolled up bang on time and we covered the journey back to Bangkok in about 90 minutes. 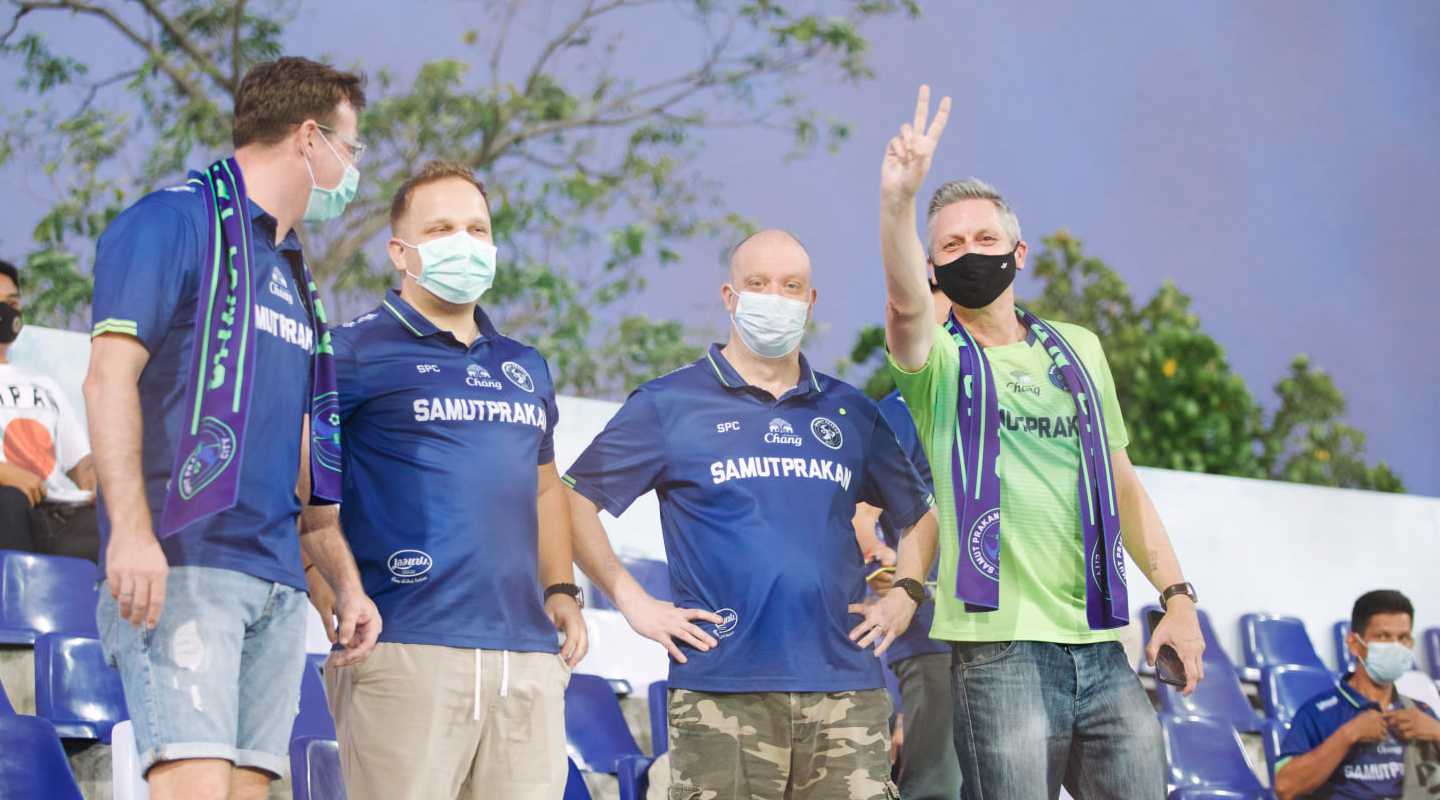 Our final home game of the season is on Sunday (21st March) at home to the already relegated Trat FC.