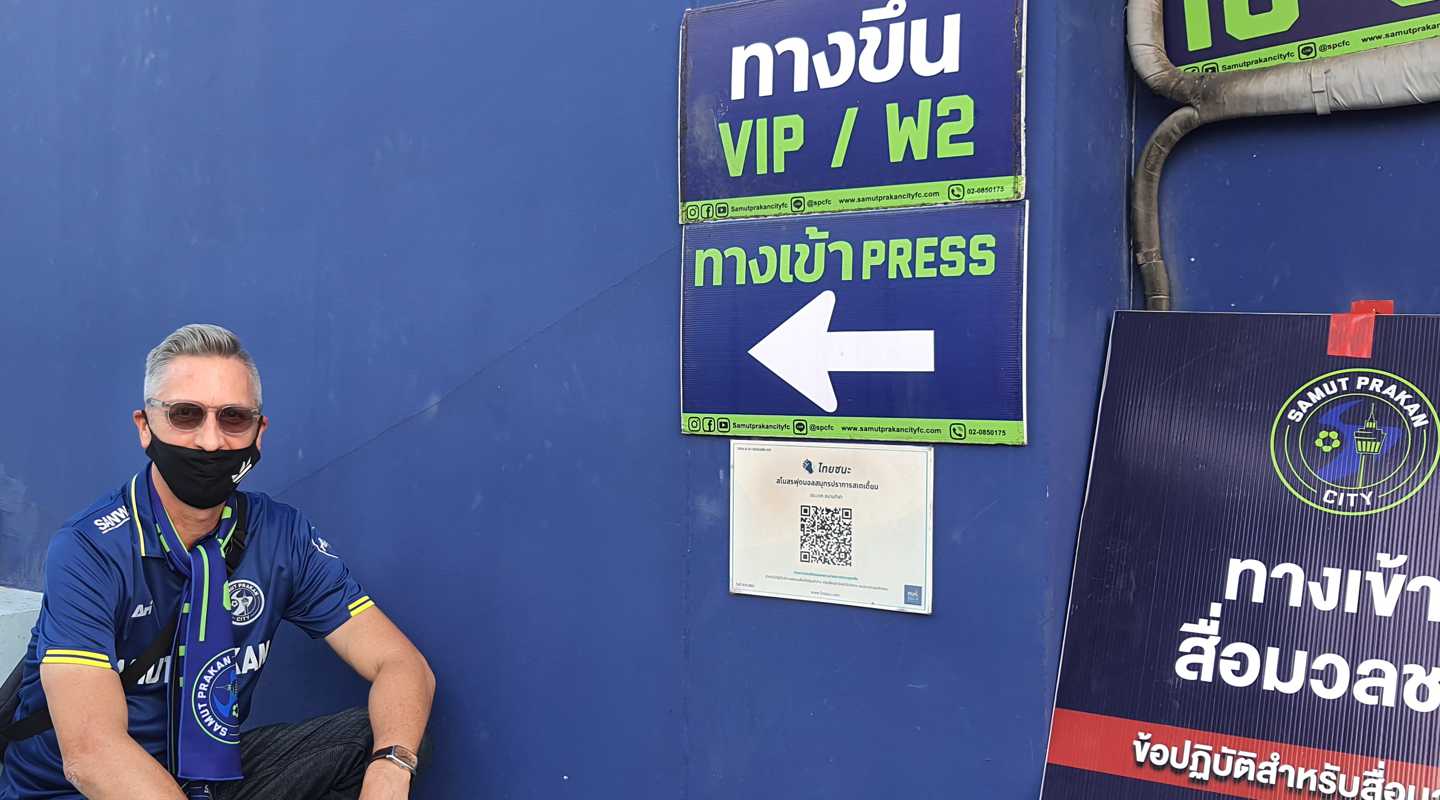 It's a warm welcome to The Firebats from up north. How did this game go last season?

A dreary nil-nil draw. In fact I couldn't remember a single thing about the match. Sukhothai were probably the most boring team in the division at that point.

But this is a far more watchable Sukhothai side this season?

They've assembled a very decent team and been involved in some highly entertaining contests of late.

In the last four games, there has been a 3-3 draw with Nakhon Ratchisima, a crazy 5-4 victory at Bangkok United (which resulted in United's manager, Mano Polking, handing in his resignation) and last weekend, they went down 2-3 at home to league leaders, BG Pathum.  You're guaranteed goals at a game involving Sukhothai.

And this will be the return of two old friends?

Yes, we say welcome back to Ibson Melo, the Brazilian striker who was such a crowd favourite last season. I occasionally chat to Ibson on Facebook and he still has a special place in his heart for Samut Prakan and always makes time for fans. I genuinely love the guy!

After scoring 16 goals for Samut Prakan last season, Ibson has moved to Sukhothai and continued where he left off, forming an impressive strike partnership with club legend, John Baggio. They've netted something like 13 goals between them already.

But let's not forget Sukhothai manager, Surapong Kongthep, who also makes a return to the SAT Stadium this weekend. One of the most astute managers in the Thai league, he was the guy who got us off to that dream start in our first campaign and instilled a belief that we could truly compete with the big boys. 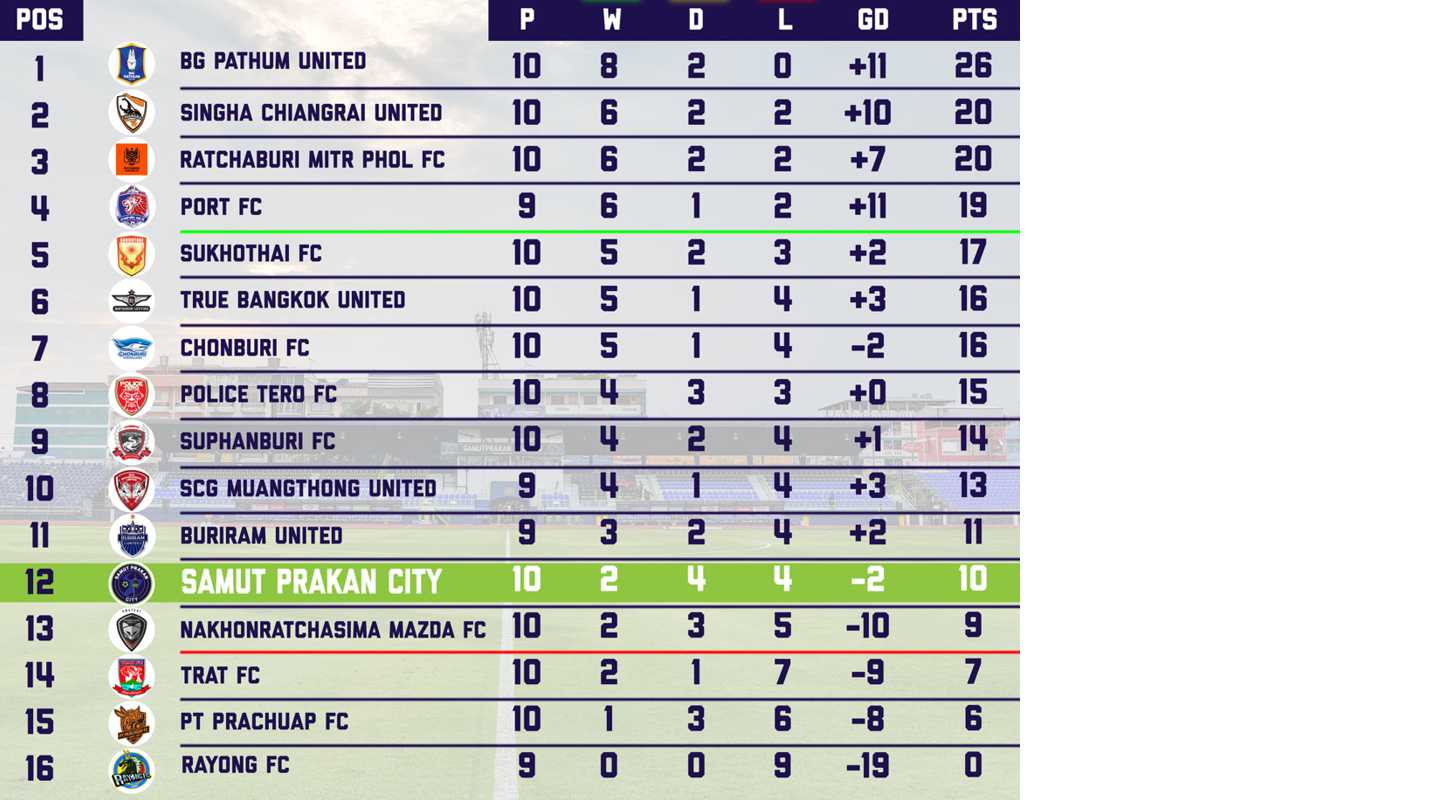 But times have changed and it's becoming squeaky bum time at the bottom of the premier league?

That defeat at home to Suphanburi last Saturday really hurt us. This weekend, not only do we have the difficult task of trying to overcome Sukhothai but the four clubs below us are all playing each other. Rayong, looking for their first point of the season, host Trat, while Nakhon Ratchisima take on Prachuap at their 80th Anniversary Stadium.

Talking of stadiums, some great news this week?

Yes, the government or Co-vid 19 Centre or whoever makes these decisions, has given the green light to increase the stadium capacities from 25% to 50% (with no maximums) This makes a huge difference. Simply put, a lot more fans will now be able to watch live games.

Any forced changes in the Samut Prakan starting line up?

Captain Peeradol and goalkeeper, Patiwat, were both serving bans. This meant a full debut between the sticks for Singaporean international, Izwan Mahbud. Losing those two was bad enough, but when the team was announced, there was no place for Jaroensak. Samut Prakan's star winger and 'Mr Assist' had obviously picked up an injury. Now that did feel like disaster. 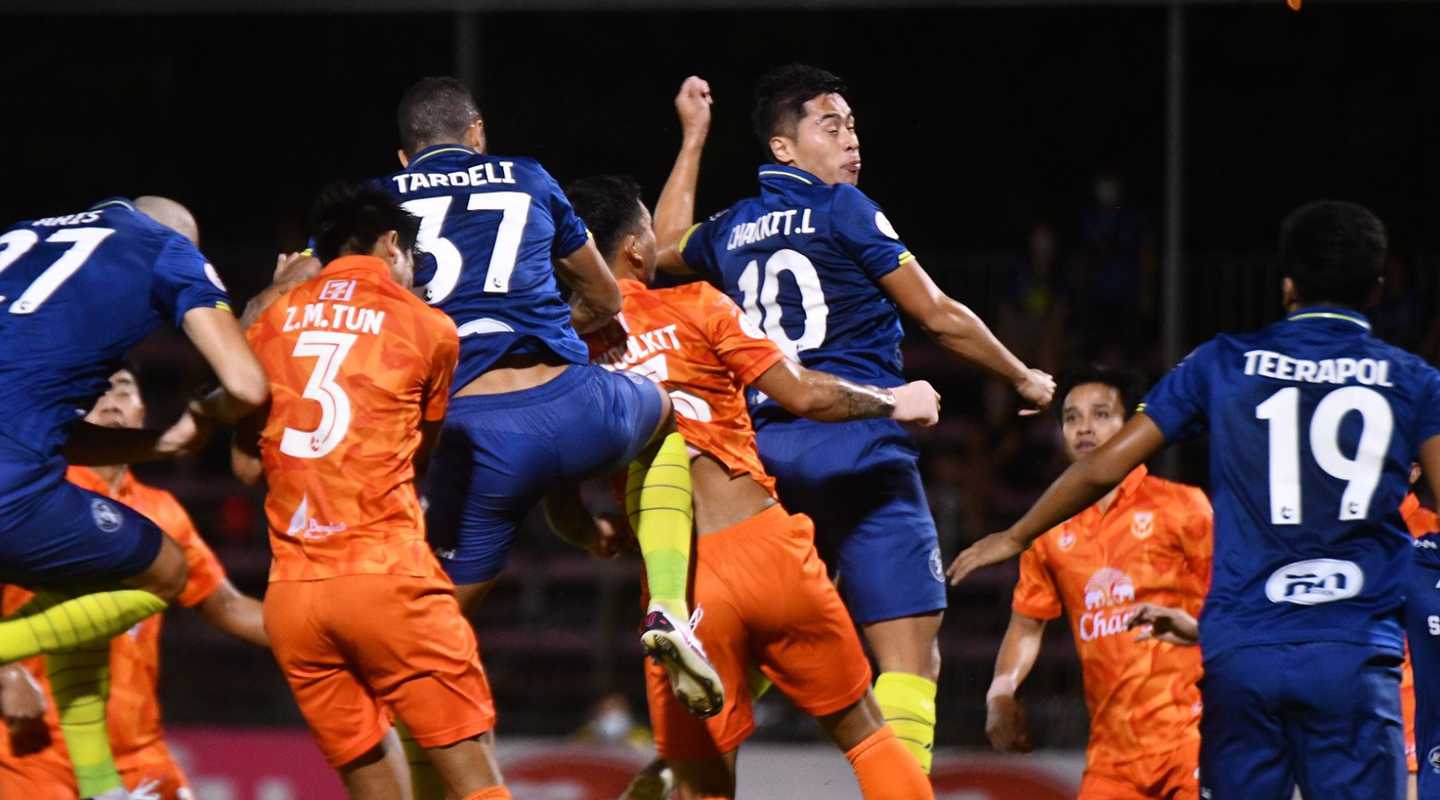 To the match itself, first half?

One Samut Prakan player who's growing in confidence with each game is Teerapon Yoyei. After a fairly sedate opening twenty minutes, it was Teerapon's mazy solo run that almost produced the game's first goal, but for the width of a goalpost.

At the other end, the first clear cut chance for the visitors fell to who else but John Baggio, with a rasping drive that Izwan did well to keep out. Baggio is a handful for any opposing team and he was to be a constant threat this evening. Moments later, he turns his marker brilliantly near the half-way line and feeds a pin-point through ball to strike partner, Ibson Melo. Ibson's shot is blocked by Izwan, having a terrific debut in the Samut Prakan goal, and it's left to Aris Jarifovic to clear the ball off the line. Another lucky escape for the home side.

But the only goal of the half comes on 41 minutes. Teerapol's clinical long-range strike putting Samut Prakan one-up, probably against the run of play. Sukhothai respond immediately with Korean, Jung Myoung Oh heading in a John Baggio free kick but the linesman's offside flag saves the day.

And the second half was even better?

This is why I love watching Thai football because the second half had everything.

Baggio puts a testing shot just over the bar on 49 minutes to signal this game is far from over, and five minutes later, he whacks in an unstoppable long range strike to put the men in orange level on the night. The man is just a different class.

Maybe I would have settled for a draw at that point but Samut Prakan conjure up a magical four-minute spell mid-way through the half. Barros Tardelli's performance deserves a goal and he duly slots in Samut Prakan's second after Chayawat loses and wins back possession in midfield. Cue an emotional goal celebration as Barros rips off his shirt and falls to his knees in front of the W2 stand. It's an unforgettable moment to savour and the only person not there to witness it is Barros Tardelli's wife. Sitting a few rows in front of me, she's taken their two small kids outside to buy a drink or to go to the toilet. When the family comes back into the stadium and fans fill her in on what she's missed, she understandably looks crushed by the disappointment. 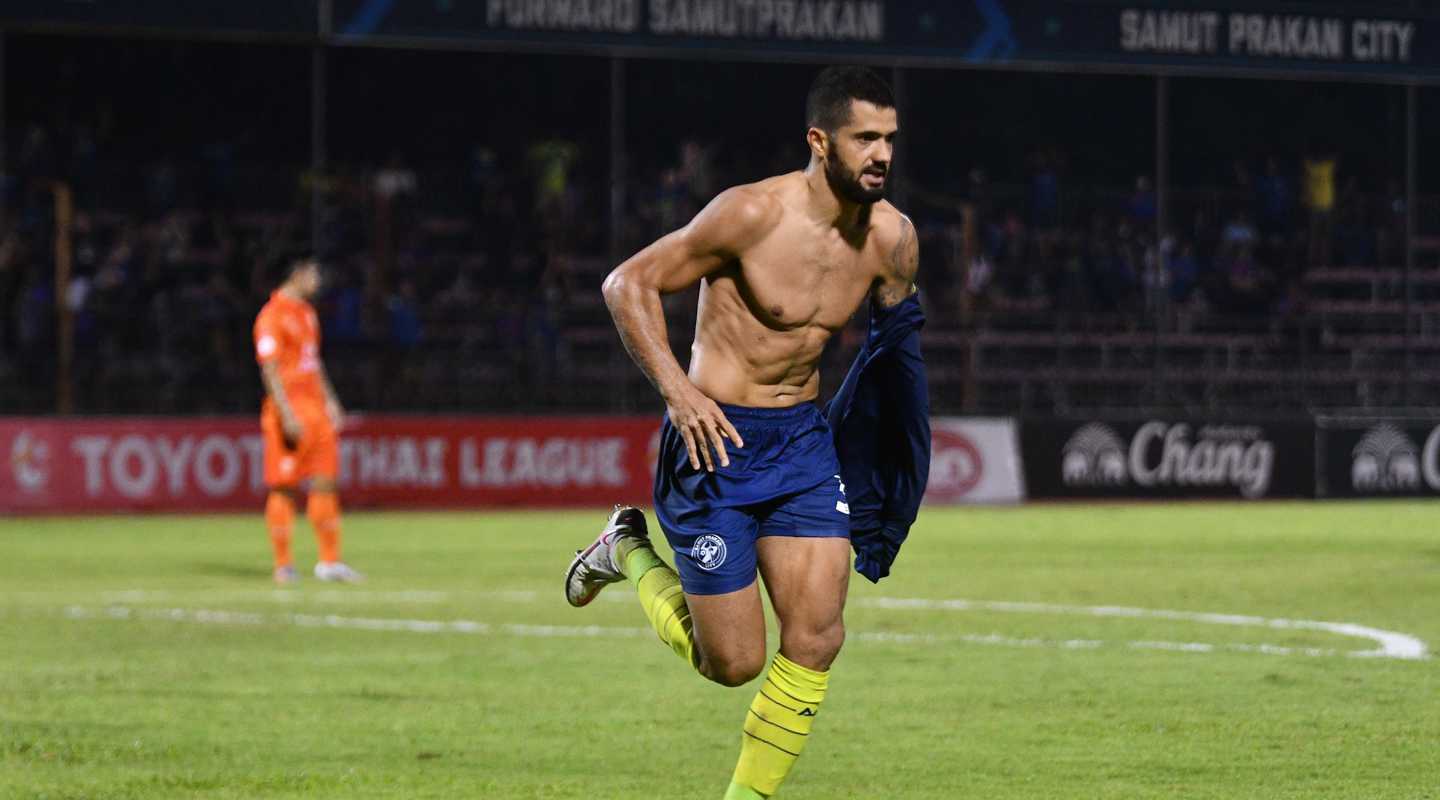 Coming just three minutes later, Samut Prakan's third goal gets better with each viewing. Chayawat, with his back to goal, chips a delightful ball out to Chakkit on the right wing and then meets the return cross with a bullet header into the top corner. Samut Prakan 3-1 up and frankly, starting to run Sukhothai ragged.

Up to now, the returning Samut Prakan hero, Ibson Melo, has had a frustrating evening - and it's about to get a lot worse.

With just 10 minutes remaining, Chakkit brings down his man and Sukhothai are awarded a penalty. After the obligatory VAR check, the penalty stands and Ibson Melo steps up to grab Sukhothai a lifeline. The spot-kick is that perfect height for a goalkeeper and Izwan keeps it out comfortably to wild celebrations from his team-mates. Those celebrations are short-lived however as a fussy referee decides the Samut Prakan keeper had moved off his line before the penalty was struck.

The penalty needs to be retaken. Ibson has another attempt but fluffs his lines again, with Izwan managing to both save and hold onto the ball. The ref consults his VAR colleagues and once more, adjudges Izwan to have left his goal line. This is getting ridiculous now. The penalty needs to be taken a third time but there's no way Ibson Melo is having anything to do with it. Step forward John Baggio and it's third time lucky as he smashes the ball into the roof of the net. Are Sukhothai going to grab an equalizer at the death?

You'll definitely enjoy the nine minutes of highlights. It was a super game.

This is why I follow Thai football because that game simply had everything. The Thai Premier League has numerous faults but by jingo, it can still serve up a great evening's entertainment.

Tonight, we beat a top six side without arguably our three best players. You can't ask for more than that. Everyone put a shift in out there. I thought Aris did a terrific job marshalling the defence. Teerapol and Chayawat both look full of confidence and we saw what Barros Tardelli is all about this evening. Going forward, he looked a threat every time he had possession and looks like he's beginning to enjoy being a Samut Prakan player.

And a mention of course for Izwan. He had a fine game. I bet there aren't too many keepers who have saved two penalties on their debut.

Shame about the attendance?

Yes, 1,244 was disappointing. I think there's a hard job ahead for some clubs looking to attract fans back to watch live games. But those fans who stayed away tonight missed a cracker!

A busy November in store as our next two league games take us to Ratchaburi and Buriram. (photo credit: official Samut Prakan City website)

It's the magic of the FA Cup first round as we make the 4-hour journey north to take on Nakhon Ratchisima in an all-premier league clash on Saturday 7th November.

Yes, my bus ticket and hotel room are both booked and I'm looking forward to seeing a new ground. Roll on Saturday!