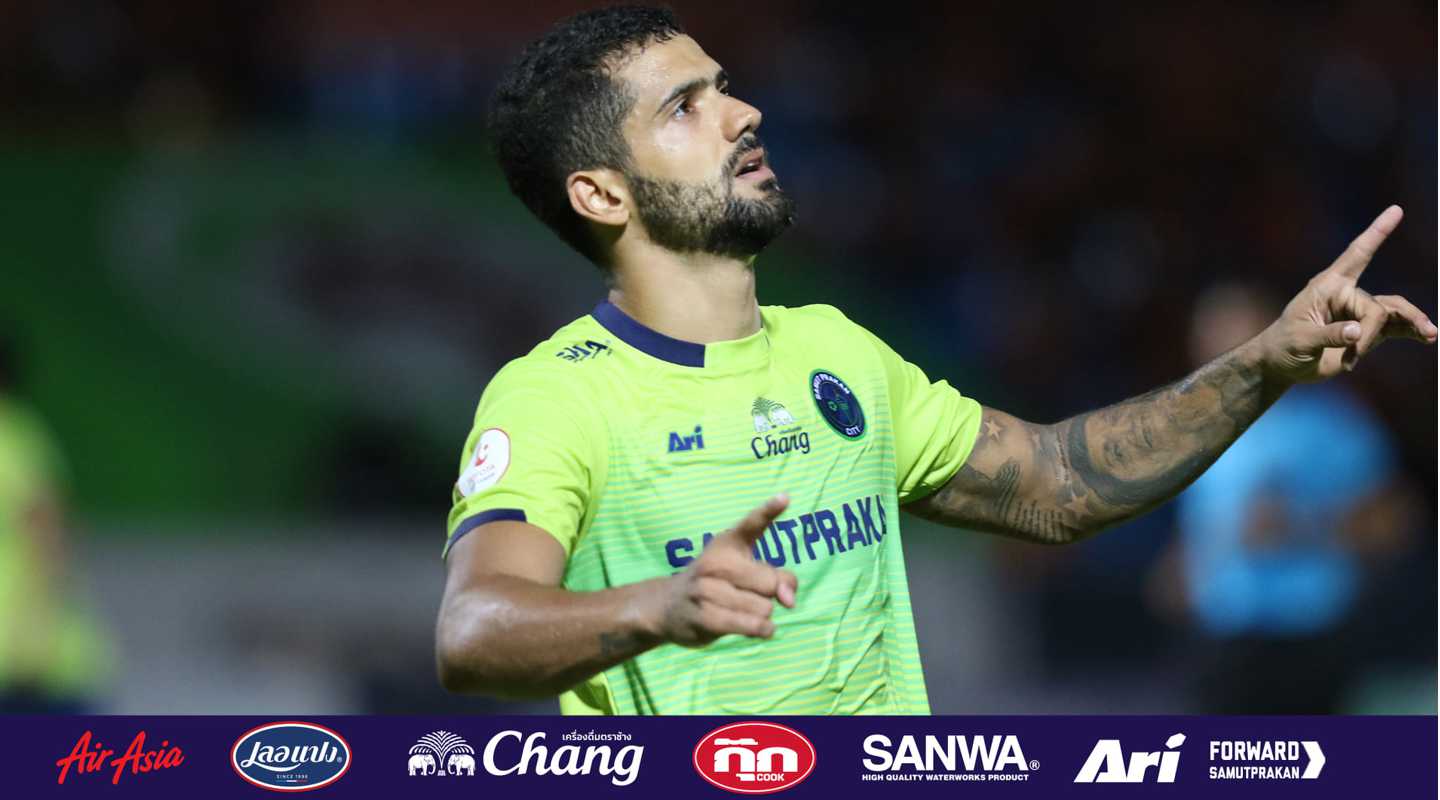 Samut Prakan journeyed south to PT Prachuap and came away with a fine 3-0 victory.

After a dull first 45 minutes with neither side creating a decent goal attempt, the men from Bang Plee turned up the heat in the second period. Teerapon Yoyei opened the scoring on 56 minutes with a headed goal from a pinpoint Jaroensak cross. Captain Peeradol capped a sublime counter attack and doubled the visitors' lead with less than 20 minutes remaining. Finally, our on loan Brazilian striker, Barros Tardelli, netted four minutes from time to open his account for the club.  Watch the match highlights.

Apart from the unfortunate red card for Japanese midfielder, Yuto Ono, there were so many positives to take away from the game. It was Samut Prakan's third successive clean sheet since the season restart and the defence is looking rock solid with Zarifovic and Phumipan developing a good understanding. In addition, this was the first game this season where we've scored more than one goal.

On a final note, kudos to the half a dozen fans who braved the nine-hour return journey and wouldn't have got back to Samut Prakan until the early hours of the morning. You're a credit to the club!

Let's get to tonight's opponents, Nakhon Ratchisima. They've had a poor start to the season?

They currently find themselves in the bottom three but because of renovations to their 80th Birthday Stadium, The Swat Cats had to play their opening five games away from home. So not an ideal start.

On the road, they got thumped 4-1 on the opening weekend at Port, steadied the ship with a 2-1 win at Rayong but then came three defeats on the bounce at Chonburi, Ratchaburi and Suphanburi.

Since their stadium re-opened for business, they've suffered a 4-0 reverse against Chiang Rai and dropped two points against Sukhothai, drawing 3-3 after being 3-1 up at one stage. This is a team that needs some positive results fast!

What does Russ, your Swat Cat supporting friend, have to say?

"As a Swatcat fan, I'm not too optimistic about the weekend's game. I expect a 2-0 win for Samut Prakan City. However, looking at future Swatcat fixtures illustrates how important a victory at Samut Prakan is this weekend. Our next two matches after the international break are away to Buriram and home to Bangkok United. We will, in all probability, lose both of these games and could possibly be cut adrift in the bottom three with little hope of recovery" 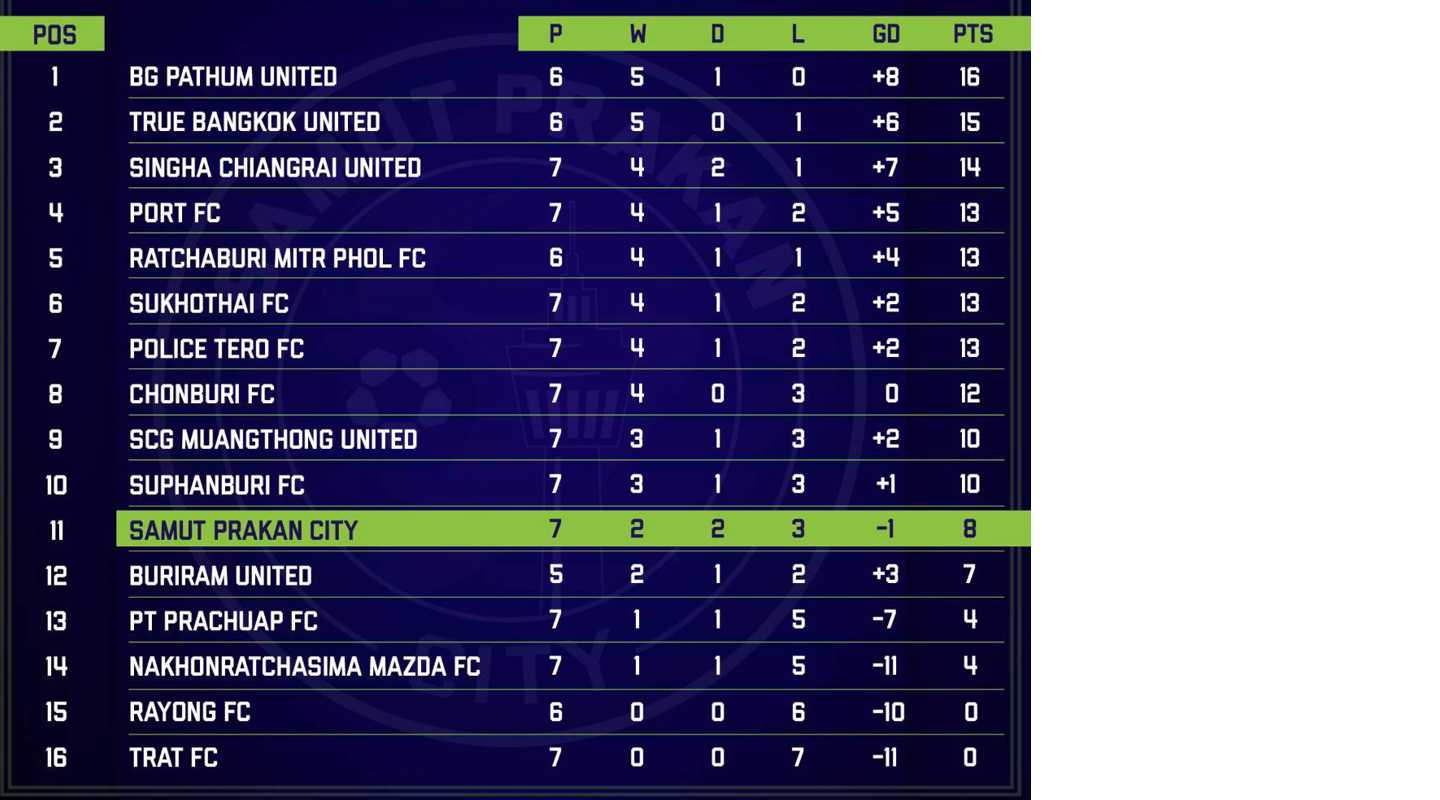 What was the score in the corresponding fixture last season?

A poorly attended mid-week game ended with a comfortable 2-0 home win for Samut Prakan and a brace for Teerapon Yoyei.  Sadly, the game will always be remembered as the night that our much loved manager, Surapong Kongthep, handed in his resignation. I'm so happy to see him doing well in the Sukhothai hot seat because he's a fine manager!

A word on attendances

Only 751 people turned up for Samut Prakan's last home game against Rayong FC, which was well below the 25% capacity allowance. In fact, only a handful of TPL clubs are managing to sell out their 25%. Have fans lost their appetite for watching Thai football? Was the season suspension too long? Are televised English Premier League games a more exciting alternative? No one really knows the answers. However, I was hoping for a better turnout this evening, given it was a Sunday 7pm kick off and Samut Prakan were in decent form. 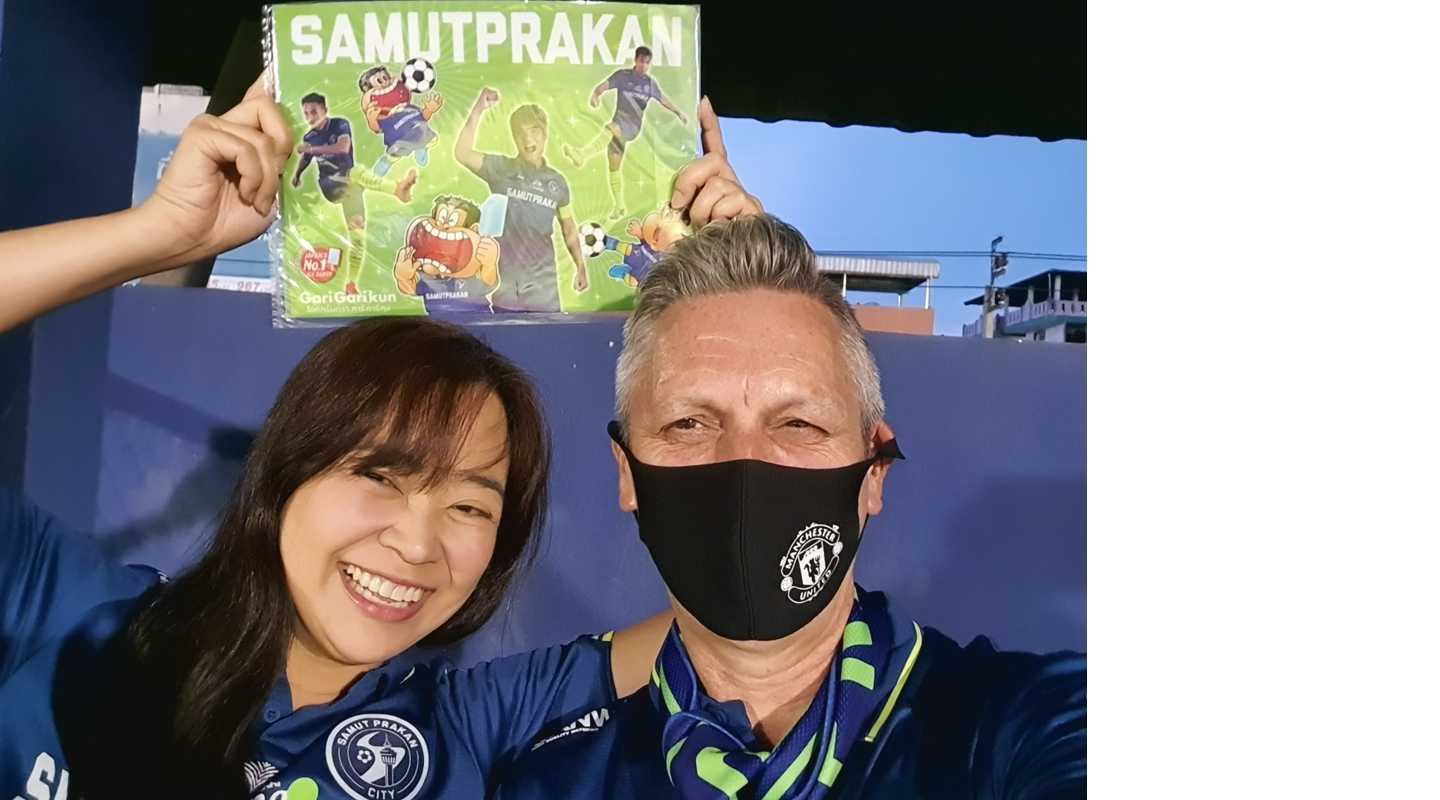 Let's get to the evening and the game itself. Much of a hassle getting in?

No, it all went much smoother than the last home game - basically, just a temperature check as you entered the stadium. The official attendance was announced in the second half as 1,115, so just under the 25% allowance.

Any surprises in the Samut Prakan starting line-up?

Captain Peeradol started on the subs bench so I'm guessing he was carrying a knock of some description. That was certainly a huge blow but it meant the ever-reliable Nopphon Phonkam was handed his first start of the season in midfield.

And what about the game?

I'm going to break with tradition and post a guest report for this one. Russ was watching the game from the comfort of his armchair in Khorat. This is what he had to say. Take it away, Russ.

Desperate to put their season back on track, the Swatcats traveled to Samut Prakan to take on the Sea Fang.

The home side started brightly, creating a couple of half chances in the opening minutes and in the 11th minute they were awarded a penalty when Barros Tardelli manufactured a fall over an already injured and prone keeper, a scandalous decision in my opinion. Tardelli converted the spot kick himself to put the Sea Fang one up.

Samut Prakan went two up in the 26th minute after inept defending allowed an unmarked Teeraphol Yoyei to tap in. Minutes later Assumpcao went close with a lobbed effort but this was a rare foray forward as the home team dominated.

Much against the run of play, the visitors pulled one back in the 35th minute when Chitchanok fired in after good work from Amadou. Minutes later, the Swatcats rode their luck when a Tardeli goal was ruled offside after a VAR review and as the half time whistle blew, the visitors were lucky to be only one down.

Amadou had a superb shot saved in the 56th minute as the Swatcats searched for an equaliser but the home side looked dangerous when breaking forward and a third looked likely. Assumpcao had a rakish shot skim wide in the 75th minute as arguably, the Swatcats were becoming the better side in the second half.

The visitor’s endeavour was rewarded when , in the 80th minute, a flowing move forward ended with an Amadou cross being deflected in by a defender to draw the scores level. Samut Prakan exerted pressure in the dying minutes but were unable to penetrate a resolute defence.

A game of two halves. Samut Prakan looked the better side in the first half but to their credit, the Swatcats fought back in the second half and arguably deserved their point. Well done guys. Maybe there is hope!

And the home fan's opinion?

Russ is not a 'one-eyed supporter' so I will always respect his version of things. I disagree slightly that it was 'a game of two halves'.  Samut Prakan completely dominated the first period and I thought the second half was pretty even.

Samut Prakan's opening goal (the Tardelli penalty) was dubious but we probably played our best 45 minutes of the season in that first half and deserved more than just a one-goal lead at the interval. Credit to The Swatcats for fighting back, but it was a sloppy goal to concede from our point of view, with Jakkapan allowing his attacker to turn on the edge of the box and provide the assist.

Anything can happen in the Thai League and a one goal advantage is never enough. I could see the Swatcats equalizer coming as they grew more into the game. We brought on Captain Peeradol early in the second period but he wasn't at the races. He exerted no influence on the game whatsoever and that's what we look for from the Thailand international.

I couldn't understand taking Aris Jarifovic off ten minutes from time either (and judging by his angry reaction, neither could he) 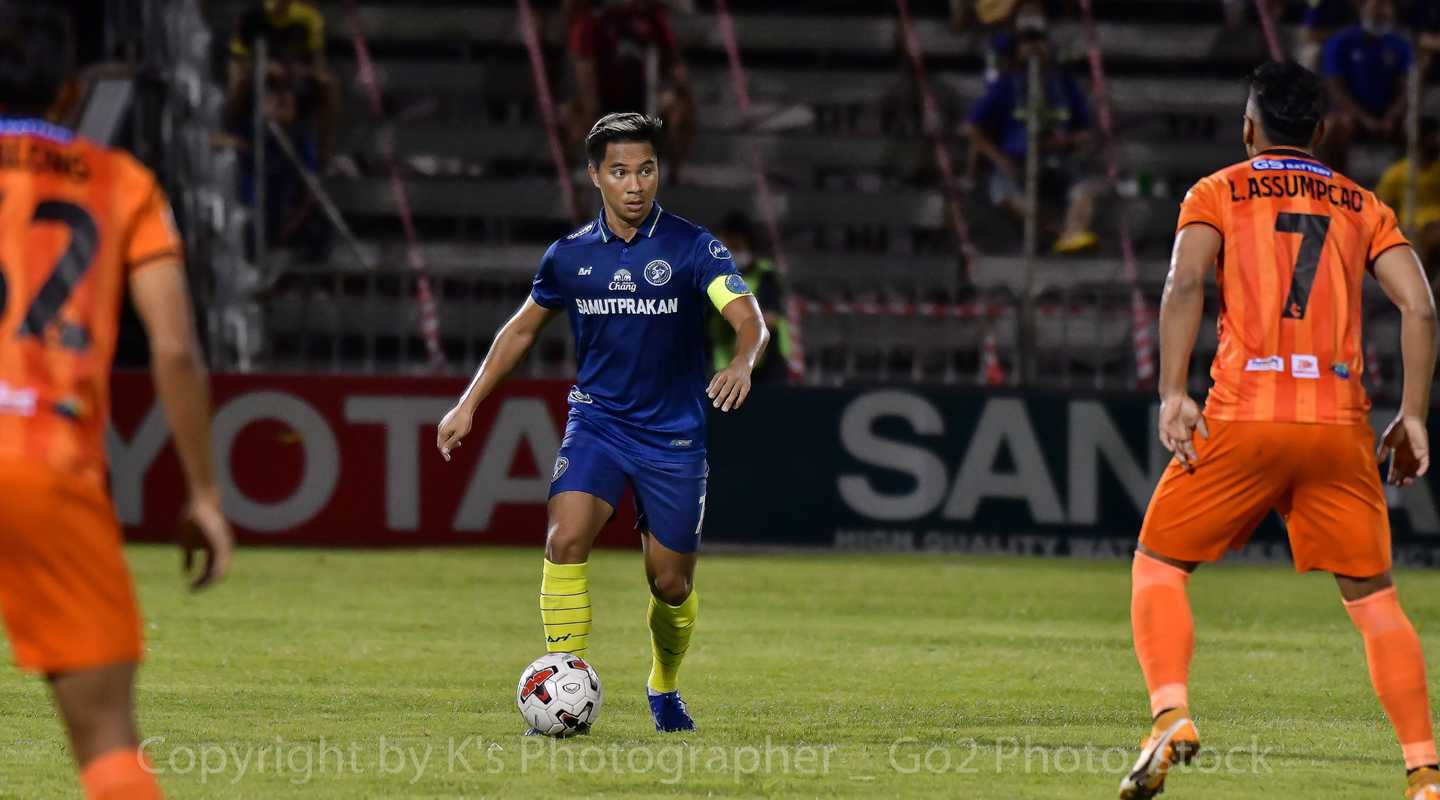 Very, very disappointed. This was two points dropped. A win would've seen us climb towards a healthy mid-table position but a draw and one point keeps us far too near the bottom.

You don't expect to lose a game when you are two-nil up after 35 minutes and cruising, but that's exactly what did happen.

The optimists would say that since the restart, we're unbeaten in four games, but apart from an away point at Muangthong, they've all been games against the division's weaker sides. There are much tougher tests to come. 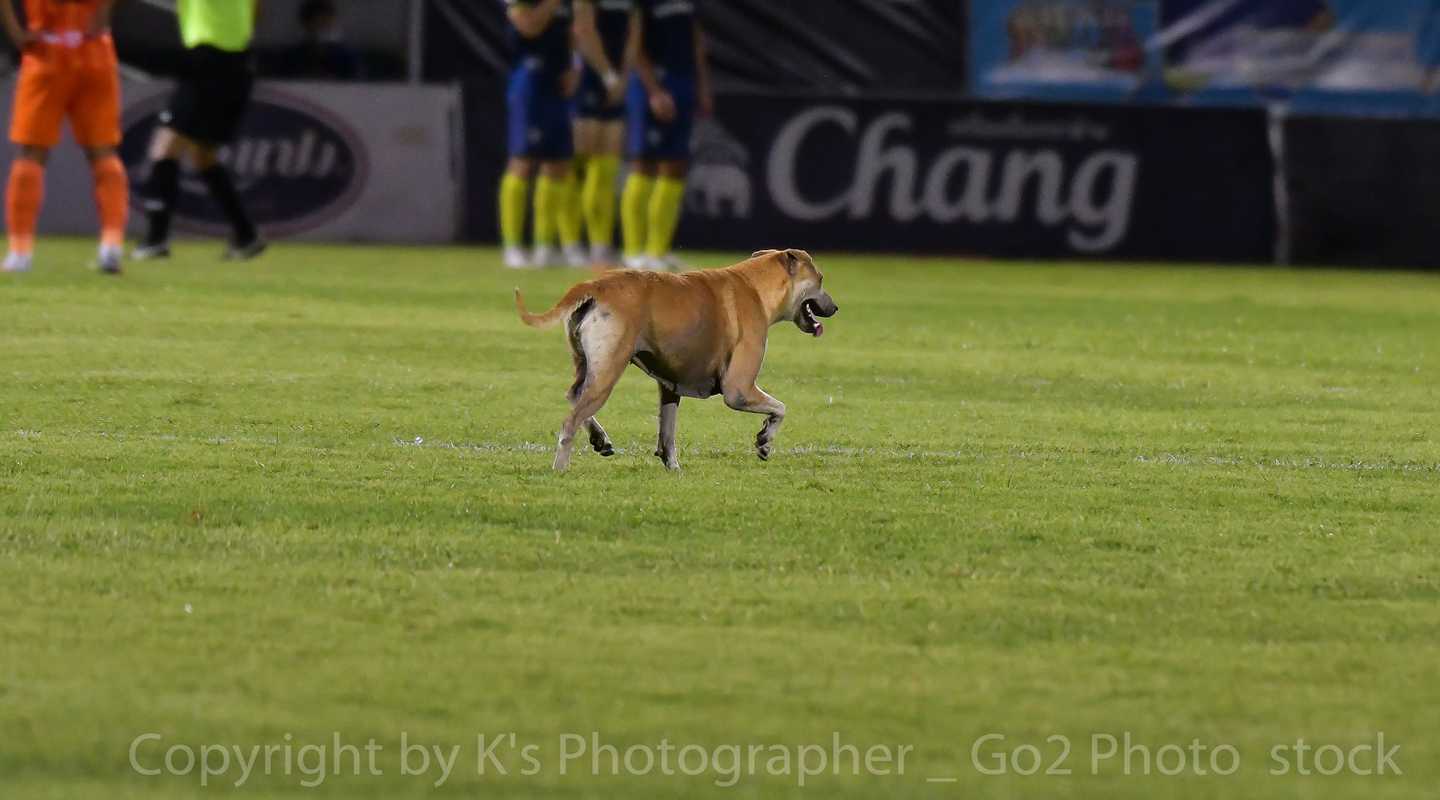 This stray dog crossing the pitch was one of the stars of the first half (credit: Go2 Photo Stock)

But there has to be some positives?

Oh, for sure. We played some superb football, particularly in the first half when Nakhon Ratchisima just had no answer to us.

Jaroensak had another excellent evening, Bureerat and Jakkapan had sterling games in defence, Teerapon Yoyei is getting his confidence back and after a quiet first few games, we're getting glimpses into what Tardelli is capable of (notwithstanding tonight's dodgy penalty)

After the international break, Samut Prakan travel to league leaders, BG Pathum, on Saturday 17th October. It's sure to be a tough game but it's a chance to visit a ground I've wanted to see for some time - the three-sided Leo Stadium in North Bangkok.