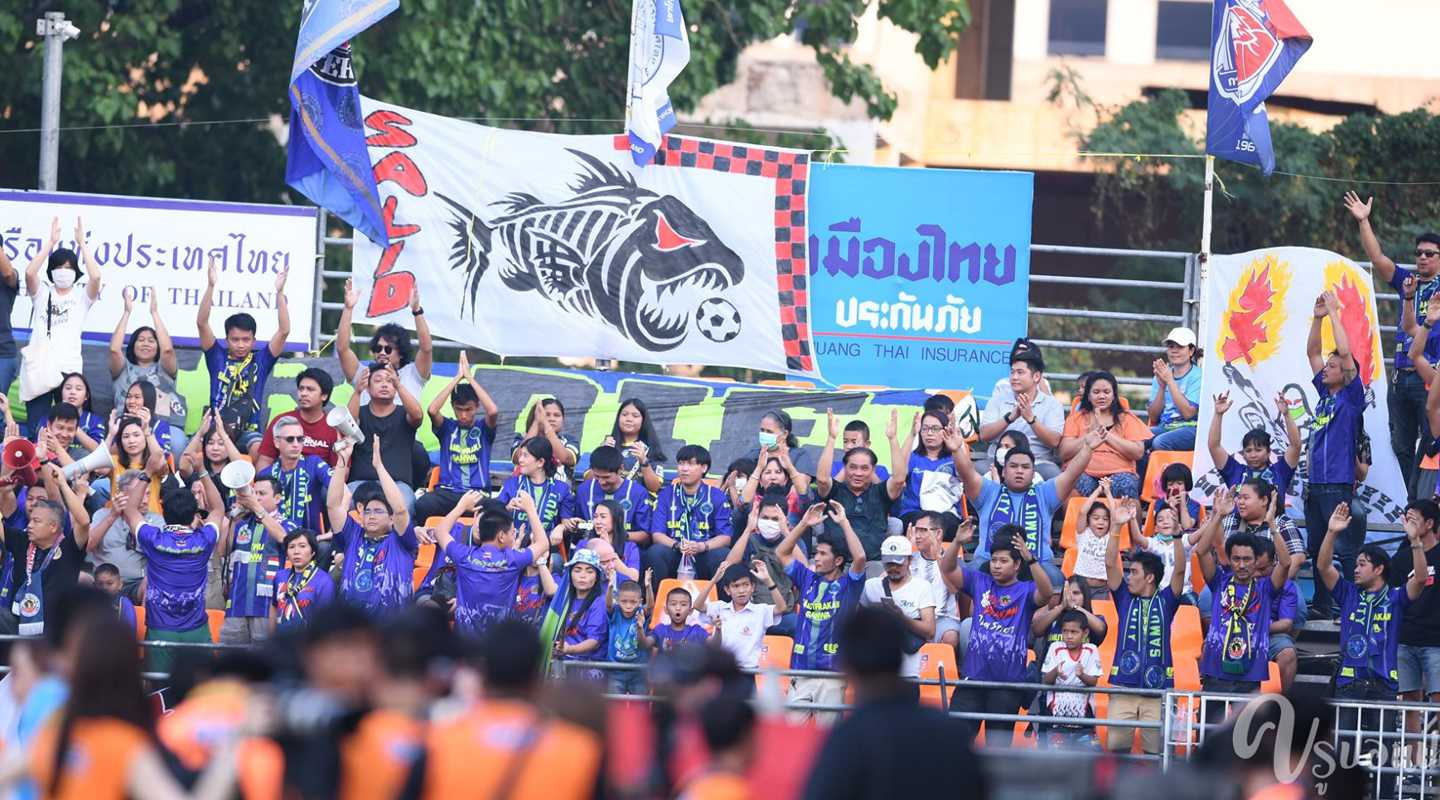 How did we do against these guys at home last season?

It was honours even in a 1-1 draw played in almost non-stop torrential rain. In fact some of those that braved the weather said the game was lucky to reach a conclusion. I didn't see it though as I was visiting my family in England and it became one of only two home matches that I missed all season.

They currently lie joint top of the league with a maximum six points from six. You can't ask for more than that. They opened their campaign with a 2-0 home win against Prachuap (both goals coming in the first 25 minutes) and followed that up with a 2-1 away win at Muangthong. This is a team in good early season form.

Samut Prakan on the other hand, are just one place above the relegation zone with only Muangthong, Rayong and Trat below them and all looking for their first point.

What players have they brought in this season?

With the news that star striker Nelson Bonilla is going to be out for the first half of the season, another South American player was brought in by the name of Brenner and this will be his first season in Thai football after playing for a number of years in his native Brazil. His career up to now has hardly been what you'd describe as 'glittering' and so far, he's only been used as a bench player.

Japanese midfielder Hajime Hosogai has arrived on loan from Buriram and should prove a useful addition. The 33-year-old Hajime has certainly been around and made 17 appearances for Bayer Leverkausen and almost a dozen for Stuttgart in his German Bundesliga years.

Yes, I said in a couple of interviews that I did for other Thai football sites that if there is one thing I would scrap about Thai football, it's those horrible 5.45 pm midweek kick offs.

Take Samut Prakan City FC for example, a lot of their supporters are good working class lads. Many of them work in factories on the industrial estates around Samut Prakan. They simply can't get to 5.45 kick offs and it has a sizable effect on the attendance.

In England, if you ever needed extra time to travel to a midweek game, you could always ask your boss if you could leave early or get some kind soul to cover a shift, etc. That generally doesn't happen in Thailand. My pal Ben would love to come to this game with me but he has to work until late on Wednesdays. He wouldn't dream of finding a way to swap shifts or working something out with a colleague. It just wouldn't cross his mind. He has to work so he can't go to the game. End of story.

So 8.00 pm kick offs do give a lot more opportunity for people to attend a match.  Plus of course, the atmosphere is so much better when a game is played under floodlights, whereas if it starts at 5.45, almost the whole of the first half will be played in fading daylight.

A word from the Samut Prakan boss?

In his post match interview on Saturday, Masatada Ishii said that Samut Prakan's biggest problem at the moment was creating chances and scoring goals and we need to focus on those areas in training. On the topic of VAR, which had a huge impact on Saturday's game with Port, he said yes, it disrupts the flow of the game but he was still a fan because it analyzed and corrected any 50-50 decisions. He ended by thanking the Samut Prakan fans for their loud and encouraging away support.

And we've got VAR for this match?

I read this yesterday and still can't quite believe it but apparently the Thai FA only has the resources to provide VAR at four matches on any given day.

It isn't a problem at weekends with possibly one match on the Friday night and the other 7-8 fixtures spread over Saturday and Sunday, but midweek, when all the games take place on a Wednesday evening, four matches will use VAR and four matches won't. I don't know what else to say? The Thai Football Association - they are pure comedy gold.

You know what, I've just got a hunch that with a boisterous home crowd behind us, we can put an end to Bangkok United's 100% record. I'm going for a 2-1 home win and preparing to be bitten on the arse.

What are you going for attendance-wise?

We had an impressive 3,950 for our first home match against Chiang Rai but I'm wondering if the Wednesday night kick off combined with Saturday's hammering at Port will have an effect on the 'floating fans'. Looking at the unofficial Facebook fan page, there have been very few fans posting selfies holding match tickets.

I'll go for around 3,200 and I think even that might be ambitious. 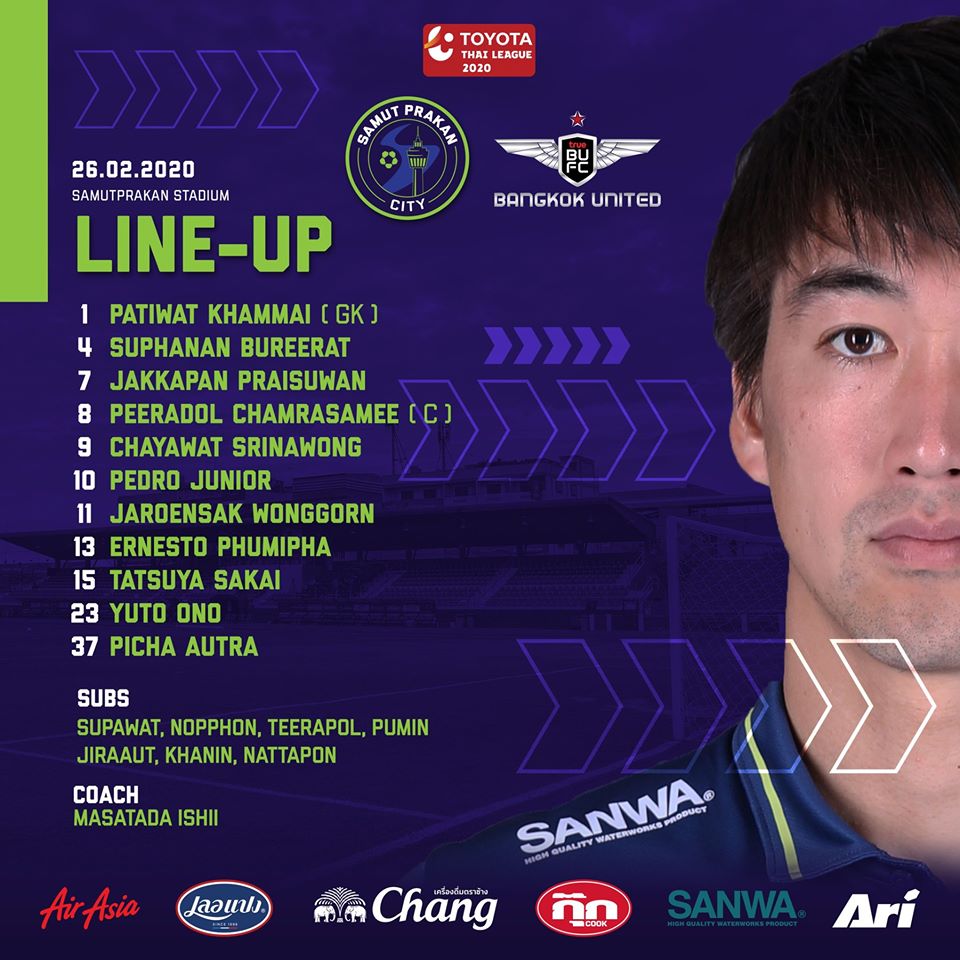 Yes, 3,200 was definitely wishful thinking. With half an hour to kick off, there wasn't the usual buzz around the ground for this one, despite a noisy Chang beer promotion and some sort of kiddies football competition trying their hardest to liven up the proceedings. Even Bangkok United's travelling support looked disappointing unless they were all hiding somewhere. From where I was sat in W2 stand, the stadium looked very sparsely populated in some areas.

The attendance was announced in the second half as just 2,200. That was poor!

Any surprises in the starting line-up?

Masatada Ishii is clearly a stickler for an unchanged starting eleven whenever possible, but with Aris Zarifovic ruled out, both of our recent Japanese signings, Yutu Ono and Tatsuya Sukai, got a start.

In attack, once again Chayawat was preferred to last season's second highest goalscorer Teerapol Yoyei, and still no starting place for midfielder Noppon, who was virtually an ever present last year. Funny how players you view as the nucleus of the side can quickly fall out of favour.

Sadly it was another 45 minutes ruined by the evil VAR. With a quarter of an hour gone, a Samut Prakan defender is adjudged to have handled in the penalty area but play goes on for 2-3 minutes before the referee touches his ear-piece and another 5 minutes at least before he decides to award the spot-kick.  By the time it's taken, we've all lost the will to live but Vander Luis strokes home the penalty, sending goalkeeper Patiwat the wrong way.

The game becomes pretty evenly contested but Samut Prakan allow the Bangkok Angels far too much time and space down the flanks. 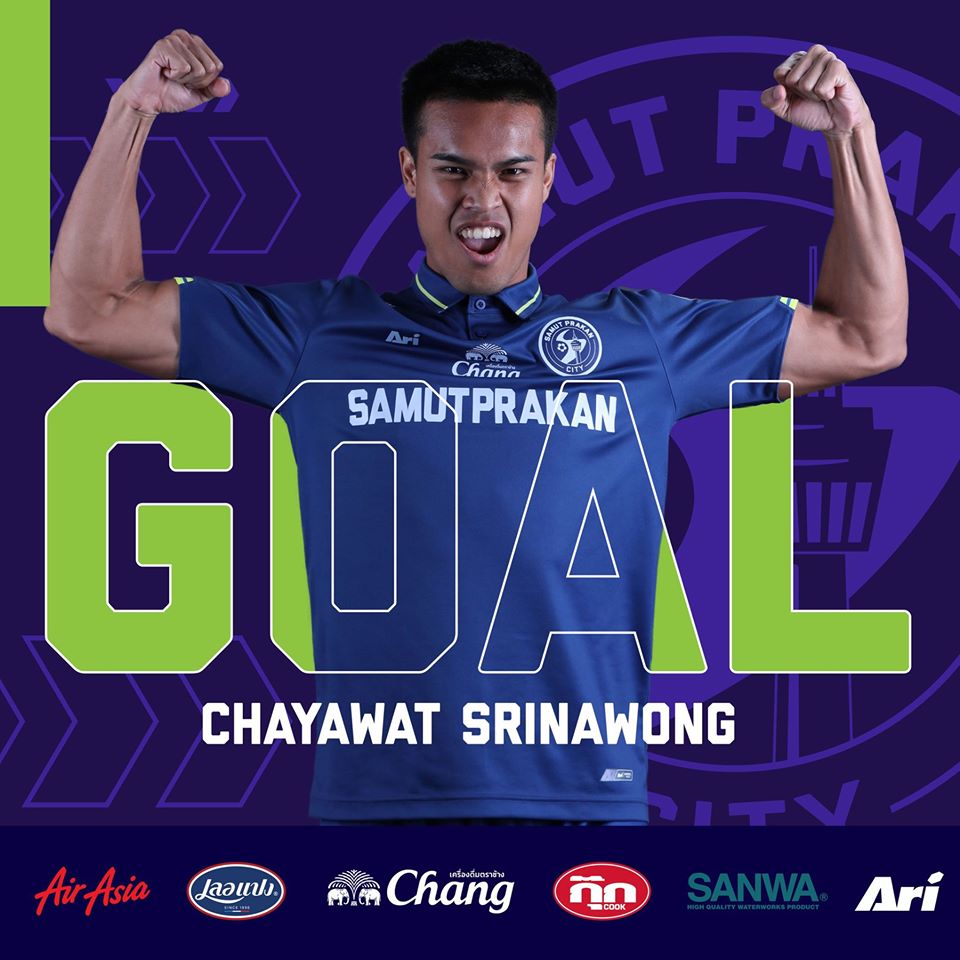 On 39 minutes, Chayawat nets the equalizer with his second goal of the season. We finally get a glimpse of what Pedro Junior is capable of as he squares neatly from the right wing to Jaroensak, whose effort is blocked by the keeper only for Chayawat to slot home the rebound. After another lengthy VAR check (not sure what for) the goal is allowed to stand.

Oh and I think somewhere along the line, Bangkok United had an effort ruled out for offside. That was the third VAR check we had to endure.  Sod off VAR!

Nattapon Malapun, our new signing from Prachuap, replaced Jakkapan at the break but it was Bangkok United who came out all guns blazing and had arguably their best period of the game, with one rasping drive rattling the underside of the crossbar but bouncing out to safety.

In a topsy-turvy game, the passage of play shifted and it became Samut Prakan's turn to have a terrific twenty minute spell but too often possession counted for nothing as the forwards struggled to create space and give the midfielders passing options. I focused on Pedro Junior for much of the second half and this inability to make runs and create space is for me his biggest weakness. But he tries hard.

And then just as the home side were looking the most likely, it's Bangkok United who strike the killer blow in the 74th minute. In a repeat of the second goal we conceded against Port on Saturday. number 29 Dechmitr floats in a gentle free kick from the edge of the box, and with the Samut Prakan back line standing around ball-watching, Everton is left with the easiest of tap-ins.

Teerapol was thrown on for the last 15 minutes to try and salvage a result but too many heads seemed to go down and we never looked like getting back into the contest. Bangkok United were able to see the game out far too comfortably. (match highlights) 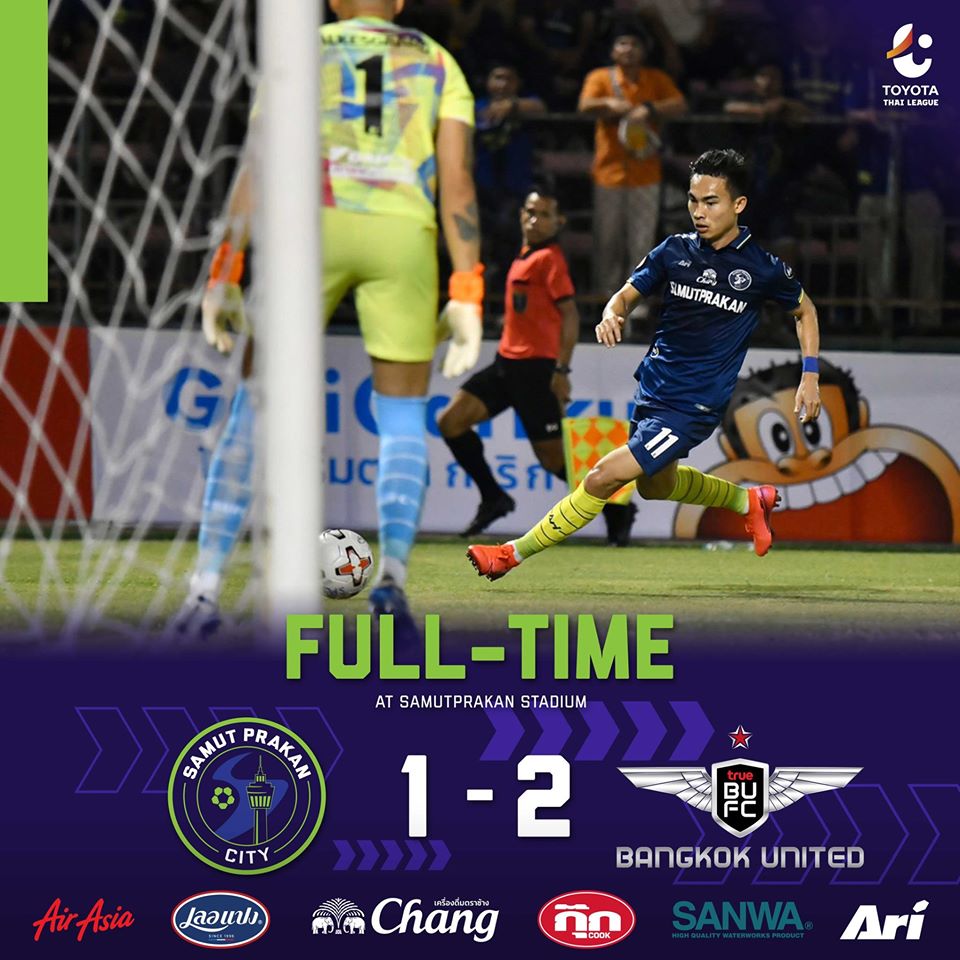 No one is pressing the panic button. Not just yet anyway. We knew our opening three games were going to be tough and whilst just a one-point return is disappointing, we've played well enough in those three games to know the results will come. However, I'm sure the teams around us at the foot of the table are all saying exactly the same thing.

Last season, we were never out of the top six, so occupying one of the three relegation places is unfamiliar territory. Last season, we were punching above our weight but were swept along by momentum and the genuine belief we were as good as any team in the TPL. I think with a number of the players, that self-belief has gone. Chatting with a fellow Samut Prakan fan this morning, he said "it's like no one wanted the ball last night. Too many times the defence and midfield passed it among themselves with no one willing to make forward runs. And fast counter attacking was such a feature of our play last season"

We make the short trip to North Bangkok on Sunday for a 6.00 pm kick off against newly-promoted Police Tero, currently lying 6th in the TPL. 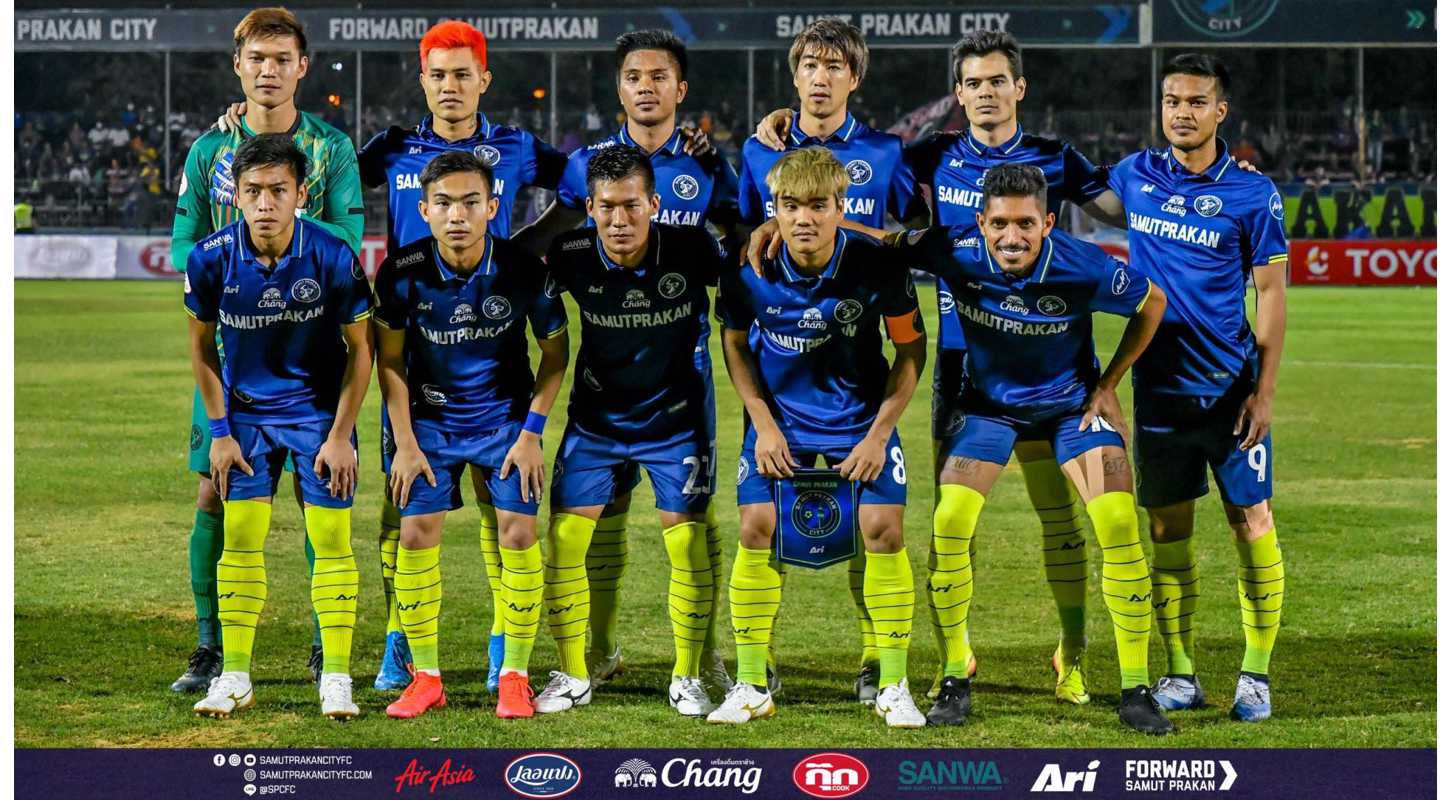