A few weeks have passed, so time to talk a little more about life in Chiang Mai. For this blog I'm going to visit the Chiang Mai Foreign Cemetery. It's an absolutely fascinating place for people who want to know a little more about members of the foreign community who have lived, and died, here over the last 140 years. The remains of missionaries, teak company employees, diplomats, soldiers, children, adventurers, teachers and assorted expats from a wide range of countries lie side by side neatly arranged to follow the borders of this small plot of Thai soil that is ‘forever England'. 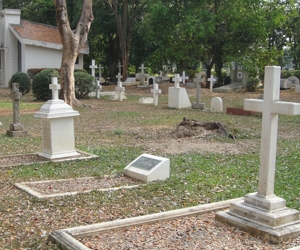 The land was originally placed into the care of the resident British Consul in 1898 by King Rama V, but he attached two conditions: it cannot be sold and only foreigners (non Thai) can be buried there. It continues to be overseen by the resident British Consul, but nowadays most of its executive duties are performed by a committee of caring long-term foreign residents. As you enter, you'll see a map attached to the warden's house listing all the graves, their occupants and their nationalities. A few plots remain unoccupied, and I'm sure if the committee approves, you can reserve one for your final-resting-place.

There's even a statue of Queen Victoria in one corner overlooking her Chiang Mai dominion. 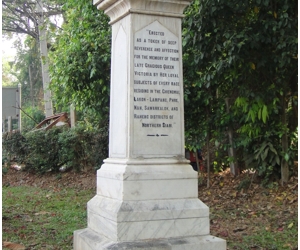 I think to uproot from the familiar and move to live in a very alien society takes courage and character. The cemetery is full of extraordinary people, and one blog isn't enough to cover all their stories. I'll start with a few and write more in the future... on condition that I haven't joined them by then.

The events that led to the violent death in 1902 of Captain Jensen, seconded from the Danish army, could possibly have led to the annexation of Northern Thailand by British controlled Burma. Britain had used ‘incidents' to take control of the natural resources of Burma in three waves during the 19th Century, and Northern Thailand's teak trees and ruby mines wouldn't have gone unnoticed by the British Colonial Office at that time. Perhaps that is why a Dane, and not a Briton, was appointed captain of the Siamese Provincial Gendarmerie in 1900.

As the 19th and 20th centuries met, much of the labour Siam used to harvest teak and rubies came from the Shan State in Burma. At that time the Shan were Burmese and Burmese were British citizens with their rights and freedoms protected by the Imperial British government. However, Siam viewed them differently and used them as cheap and expendable workers who were harassed (not much has changed!) and over-taxed.

Simmering grievances boiled over to become an uprising in June 1902. Phrae was sacked and its governor beheaded before the rebels marched on Lampang 200kms south. Here they met the gendarmerie led by Captain Jensen and his second-in-command Louis Leonowens (son of Anna Leonowens who was immortalized in the Hollywood epic The King and I). Brave and determined the defenders routed the rebels and pursued them as they fled north to Phayao where Captain Jensen was shot in the chest and died just as his militia finally put the rebellion to the sword. 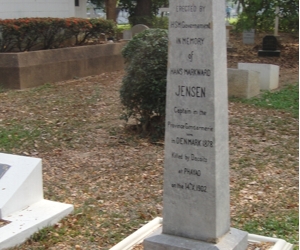 Recognizing the significance of Captain Jensen's efforts and sacrifice, King Chulalongkorn (Rama IIV) promoted him posthumously to major, paid for his headstone and awarded his estate 10,000 baht. In addition, his mother received a Thai government pension of 3,000 baht until her death in 1936. If the insurrection had spread and the Siamese had marched north to crush it, Britain may have considered intervention to ‘protect' its citizens. What would Chiang Mai be like today if the British had occupied it 109 years ago?

Close to the stream that runs behind the cemetery are five graves all related by blood. The two larger graves mark the remains of David Fleming Macfie (1870 - 1945) and his wife Kammao (1882 - 1968). David, although Scottish, was from Manchester cotton-mill money and managed the teak concessions of the Boneo Company Limited (BCL) for many years until his retirement in 1927. After donating a sacred white elephant calf from the BCL herd to King Prajadhipok, Rama VII, he was appointed to the Order of the White Elephant. During the 2nd World war he was interned by the Japanese and died shortly after his release at the end of the war. David was a founder member in 1898 of the Chiengmai Gymkhana Cub and played polo and tennis. The club still exists today and each April plays hosts to the internationally renowned cricket 6s. Kammao was a handmaiden to one of the princesses of Chiang Mai before marriage. She became a Christian and was responsible for the construction of several churches. Adjacent to their parents are the graves of Norah (1909 - 1991), Angus (1910 - 1989) and Violet (1905 -1987). All were born in Chiang Mai but moved away to receive foreign educations when they were very young. 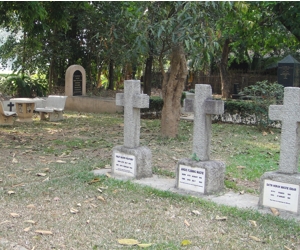 My last blog was about Dara Academy and Sophia McGalvary (1839 - 1923) the American missionary who founded it. Sophia and her husband, the Reverend Daniel (1828 - 1911), lay side by side with their backs (symbolically?) to the Gymkhana Club across the stream behind them. 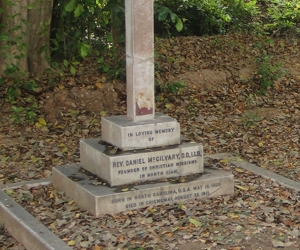 Leo GM Alting Von Geusau (1925 - 2002) was a highly-educated Dutch socialist anthropologist who started his working life as a priest but later renounced all organized religions as he became a protector and patron of the Akha hill tribe. He devoted much of his life to assisting the Akha understand and assimilate in to modern Thai life. On each of our SEE TEFL training courses there is one day set aside for cultural awareness training, and one of the places we visit on this day is this cemetery. Twice my wife Ying, who is not Akha, has stood in front of Leo's grave and felt what she describes as a warm and friendly cloud of energy envelope her arm. She's convinced it is Leo saying hello. 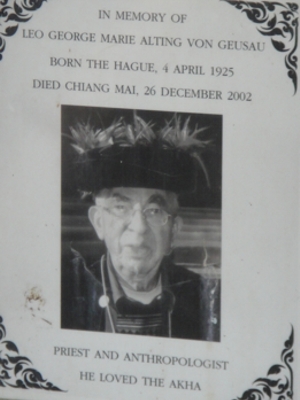 One of the most poignant areas of the cemetery for me is a small raised plinth covered by six green ceramic tiles. Four of the tiles show a young child's drawings. The other two tiles are written across with the message "Oliver Johnson a strong boy age 3 drowned February 24th, 1980". I'm not normally an emotionally person, but now I have my own children, with one a similar age to Oliver. I can imagine the horror and pain of his parents when they heard the news of their son's death. 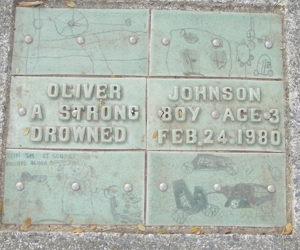 There are still many interesting stories which I will save for a future blog, but I will end this one with one that doesn't need too much explanation: 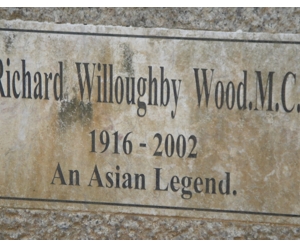 I am the granddaughter of Connie Mangskau, born in Chiangmai to Charles Bernard Ainslie and Kunkaew Pakdee. My mother, Joanna, remembers the MacFie family. As D.F. MadFie was in ill health, he was allowed to remain outside the camp on house arrest.

I am writing a book about my grandmother. The website is

Hi John it's great to see that a foreigner living in Thailand appreciates and respects not only the Thai aspects of Chiangmai but also the foreign aspects of it, specifically in this case the historical British component. I have visited the cemetery several times. It's truly fascinating to see that Chiangmai was and is still today a truly mulit-national and multi-cultural entity which encompasses the best of it faceted spirit. For individuals who are not Thai and especially those who are originally from the UK the foreign cemetery is not only a place to pay respects to British citizens of the past but to also reflect and seek solace in the fact that the souls of these people will live on forever as long as we never forget their individual stories.

I went to the cemetary on John's cultural awareness day... along with a temple, a museum, and a great local restaurant. It was very fun and informative.

John, I think when you finally decide to hang up your TEFL training boots, you must be a shoo-in for the official Chiang Mai historian. I can see you in a small office, probably lit by candlelight, surrounded by thousands of musty books and family trees drawn out on old parchment. LOL

Unfortunately I don't have a great deal of information about Leonowens. He's not buried in the cemetery, but he is closely associated with Chiang Mai during the later part of the 19th Century.

When David Macfie came to Chiang Mai in 1893, he worked under Leonowens at the BCL. Leonowens was eventually sacked by the BCL. I believe a major reason for this was that it was believed he used company money to gamble with the Chao Luang (provincial governor/King) and would intentionally lose hoping the Chao would award him new teak concessions.

Leonowens lived in a beautiful teak house at the end of soi (side road) 2 Kaewnawarat (the name of the last King of Chiang Mai) Road. In fact, Leonowens' old house is still at one end of this soi and the SEE school building is at the other end in the far corner of the old BCL compound. The current owner of the house is the granddaughter of Willaim Bain, the last manager of the BCL. She runs a popular restaurant in the garden's grounds called Hinlay Curry. Willaim's son, 'Jack', supervises a small eclectic museum containing much of the bric-a-brac of William's life inside Wat(temple) Ket. Jack and his daughter are familiar with Leonowens and may be a good source for you.

Hi John
I was interested to read your blog on the farang cemetery in Chiang Mai. Do you have any more information about or sources for Jensen's and Leonowens's military service? I have a lot of info about Leonowens but not a huge amount about his service.
Cheers