I'm constantly amazed by how many stray dogs and cats I see on the streets around Koh Samui. Some are lucky enough to look half decent, others aren't that lucky. I've seen a dog with a leg that was so broken, it dangled limply behind the dog and I've seen a cat with a gouged out eye. But what happens? Do these animals crawl into a corner and get depressed? No, somehow, they seem to continue fighting through each day with their three legs or their one eye as if nothing had happened.

For those of you who don't know how things work in Thailand when it comes to strays, here's the run down. The number of stray animals, in my opinion, is caused by three ‘problems'. Firstly, Thais aren't THAT keen on keeping pets, secondly they don't like ‘harming' animals and therefore won't put animals to sleep that are in distress, and thirdly, because there is a large number of strays and no one taking actual responsibility for any of them, neutering is practically non-existent. So you end up with hundreds, if not thousands, of animals roaming the streets freely, the number growing daily. 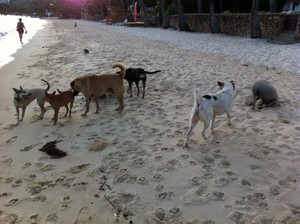 Saying that, most strays are good natured and I've not ever had a run in with any of them other than some vicious barking when I was trying to walk along the beach. I cured this by barking back and I think the dogs were so confused, they didn't know what to do - so they stopped (either that, or they didn't want me to embarrass myself any further).

It seems as if each road has their own set of stray animals. The Thai word for ‘side road' or ‘small road' is soi, so these animals are known as soi dogs and cats. People in that street might share the odd bit of food with these animals, throwing down scraps or left-overs but no one actually ‘cares' for them. None of them have a nice bed to curl up on, or fresh water to enjoy. None of them get cuddled or stroked or told how beautiful they are. I often see dogs walking up to people, tails wagging (as only dogs can do), only to be ignored and then walking away, tail down. It's heart breaking! 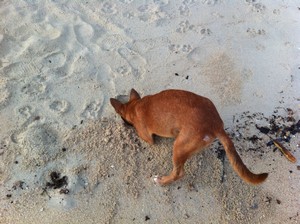 There's a definite hierarchy when it comes to dogs on the streets. In my street, there is a medium-sized brown dog who struts his stuff in such a manner that there is no doubt he is the alpha dog. He has a grubby side kick who is in desperate need of a dermatologist (and probably some tlc) and these two tend to keep their area in shape. They can both be found sleeping outside the 7-11 every day (as this provides them with sausages and sandwiches from travelling tourists who feel sorry for them) and in the early mornings, Alpha dog will join me part way on my walk along the beach, while grubby side kick continues to snore and drool on the steps of the 7-11.

Each dog on the beach that approaches Alpha dog does so with extreme caution and all he does is stand tall, growl under this breath until the other dog becomes submissive. It's very curious to watch. One step out of line and he snaps at them, and immediately, they are flat on the ground, ears down. He sniffs at them and then trots off, usually followed by the offending dog. Other dogs join and keep their distance but they all seem to get along and some even dart up and down the beach playfully rolling in the sand and splashing in the sea. 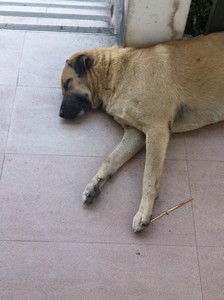 I had a first hand experience of strays recently when I got adopted by a cat (yes, that IS worded correctly). He appeared curled up on my doorstep one day and before I knew it, I was putting out food for him, but at the same time telling people I didn't want a cat. I took him to the vet to get vaccinations and sadly, he became very sick and had to stay overnight for just over a week. I felt so sorry for him but a lot of people reminded me what would have happened if he'd been on the streets. I'm happy to report, he's fully recovered and chewing on my furniture as we speak.

But not all animals have a happy story like Timmy does. That animal with the hanging broken leg probably went through hell on its own after the incident. How did it cope with the pain, how did it eat, how did it get through each day with nothing but the prospect of dying or surviving as a choice? The cat with the gouged out eye - how painful was it? How did the cat adjust to only being able to see out of one eye? Does it get picked on by other cats?

We might not be able to talk to animals, but I reckon they'd have some pretty amazing stories to tell us if we could. But pause for a second and imagine what strength of ‘character' these animals must have. How they tackle life and push through struggles with no love or support from anyone or anything. Would they laugh if we offered them anti-depressants? They might tell us that sometimes you've just got to get on with things, no matter how much pain or distress you're going through, as long as you keep moving forward, you will survive.

I guess humans can learn a lot from soi animals.

If you are seeing distressed and injured animals on Samui call Samui Dog and Cat rescue they do a great job, including a lot of desexing.
http://samuidog.org/