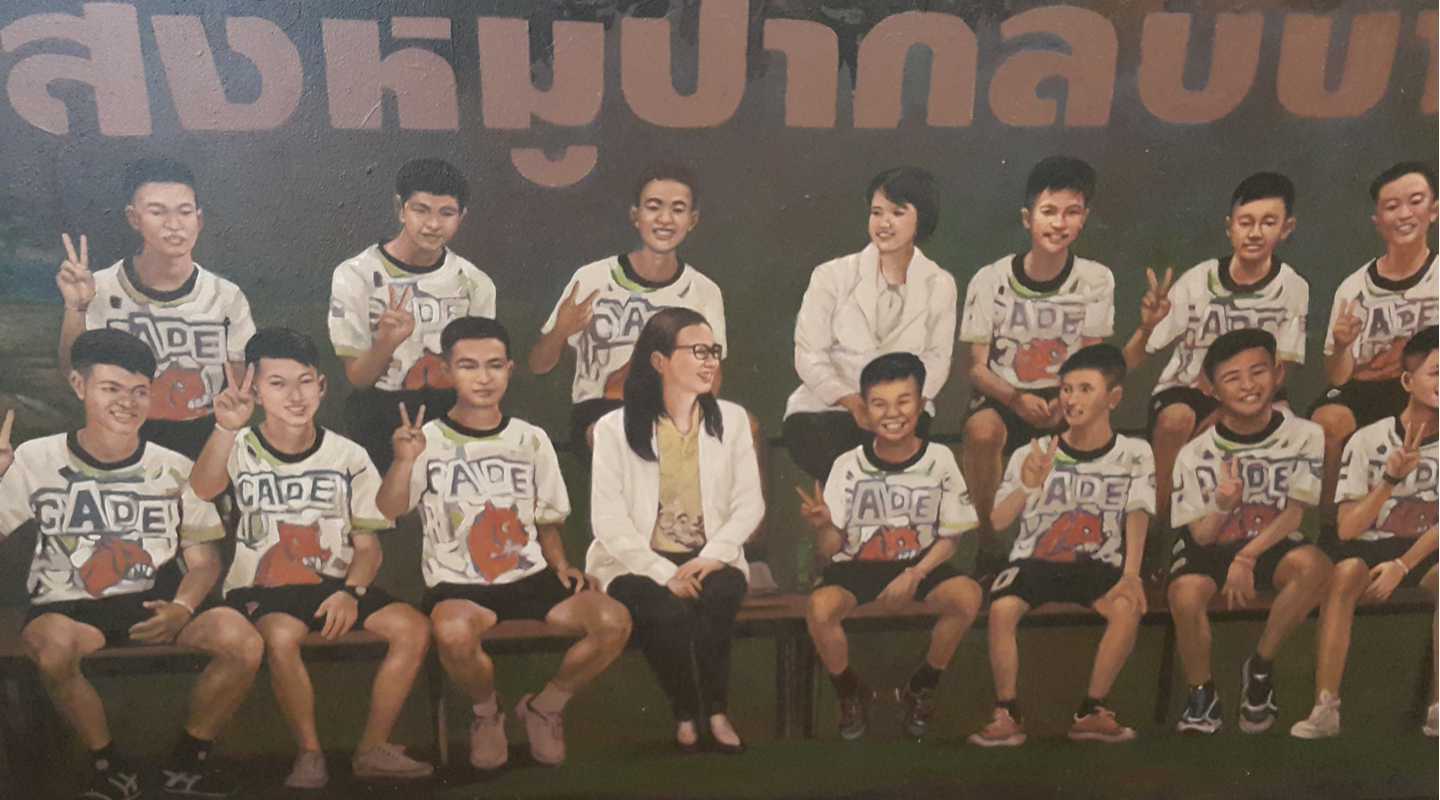 It was the story that had the TV-watching world on the edge of its seat for two weeks.

On Saturday 23rd June, 2018, a group of twelve boys, some as young as 11, entered the Thamluang cave complex near the border of Thailand and Myanmar, accompanied by their 25-year-old assistant coach. The football-mad schoolboys were all part of a local team called The Wild Boars - a team that was unknowingly about to become world famous.

The boys and their coach had only planned to spend a few hours exploring some of the more accessible caves but heavy rain and flash flooding forced them deeper and deeper into the underground complex. The Wild Boars eventually became completely stranded without food or water. There then began a frantic race against time and an international operation to find the boys and bring them out alive.

A couple of weeks ago, my wife and I travelled up to Chiang Rai to take advantage of a bank holiday weekend. We had heard that the Thamluang Cave had become something of a major tourist attraction and 16 months after the Wild Boars were rescued, we were eager to see what Thailand had done to commemorate the successful mission, and in turn pay tribute to the heroes of the hour.

The Thamluang cave is just over an hour's drive from the centre of Chiang Rai. To make a day trip of it, the cave is best combined with another attraction or two in the same area. We decided to go first to Doi Tung, a mountainous region which is home to the beautiful Mae Fah Luang Garden and several touristy hill-tribe villages and markets. My wife and I drove around this area 16 years ago on our honeymoon, and while it still felt familiar, it was nice to walk around the immaculate gardens once again and then amble around the markets, purchase some unusual clothes and foodstuffs, and put some much-needed cash in the hill-tribe coffers.

From Doi Tung, it takes about 45 minutes to reach the Thamluang Cave. 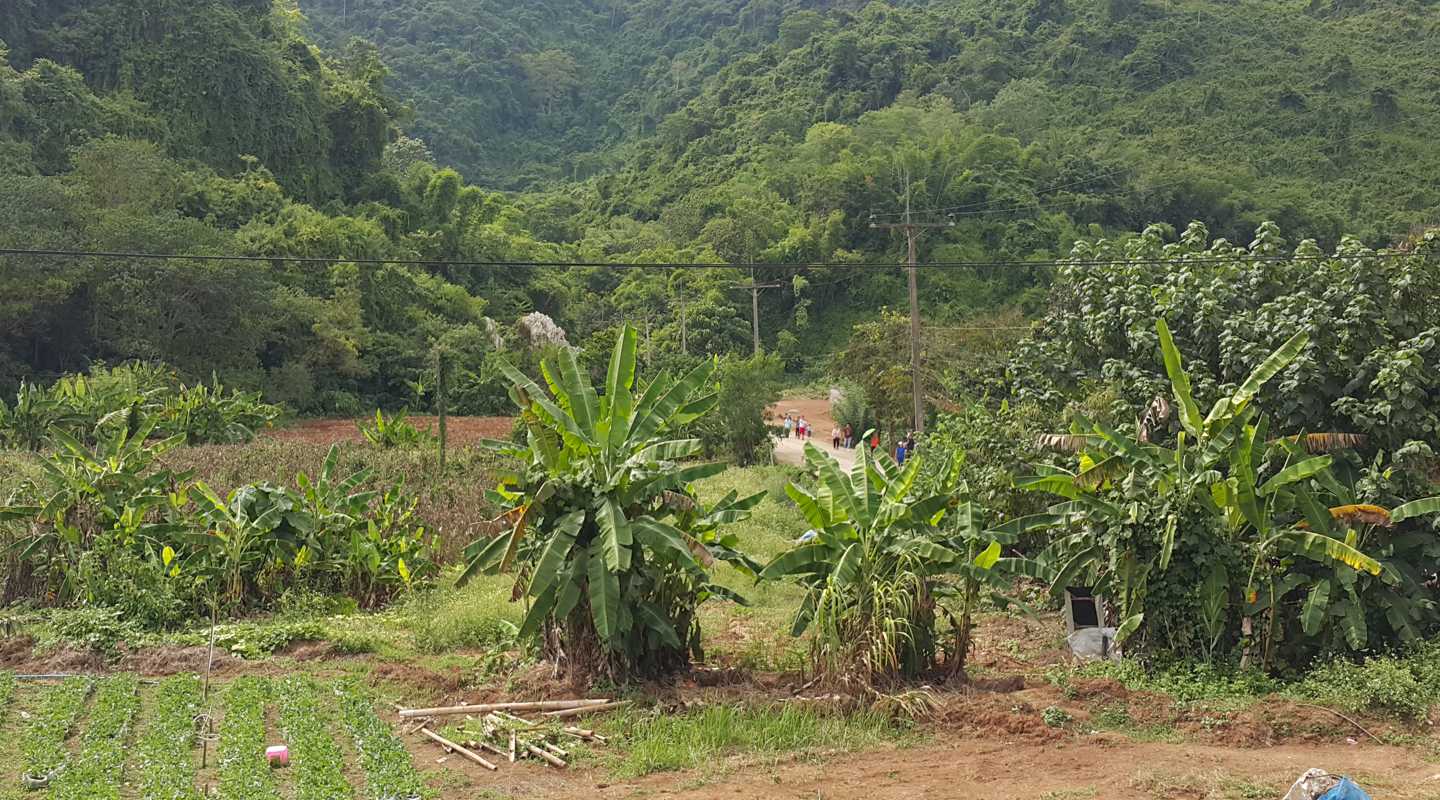 With the aid of our sat nav, we eventually find ourselves in the proverbial 'middle of nowhere'. There isn't even the resemblance of a small village to mark the spot, however; the hordes of day-trippers and the rows of sellers that had set up shop by the roadside, indicated that we had indeed reached the fringes of the Thamluang Cave complex.

Being a public holiday, we probably hadn't picked the best day to visit. It looked extremely busy as a uniformed official (presumably a park ranger) waved us into a rutted makeshift car-park. The friendly ranger told us that we would need to buy a 20 baht ticket for the return trip to the cave entrance and back on an open, single-decker bus. While most visitors seemed to choose this option, it actually wasn't necessary. I'm not one of those folks who looks to save 20 baht at every opportunity but the cave entrance was barely a 10-minute stroll, and not an unpleasant one either. It was actually a fine day for walking!

My wife made the observation that the visitor demographic was almost exclusively North-centric. All of those around us spoke with that very-hard-to-catch northern dialect. And I never saw another foreigner the whole time I was there. 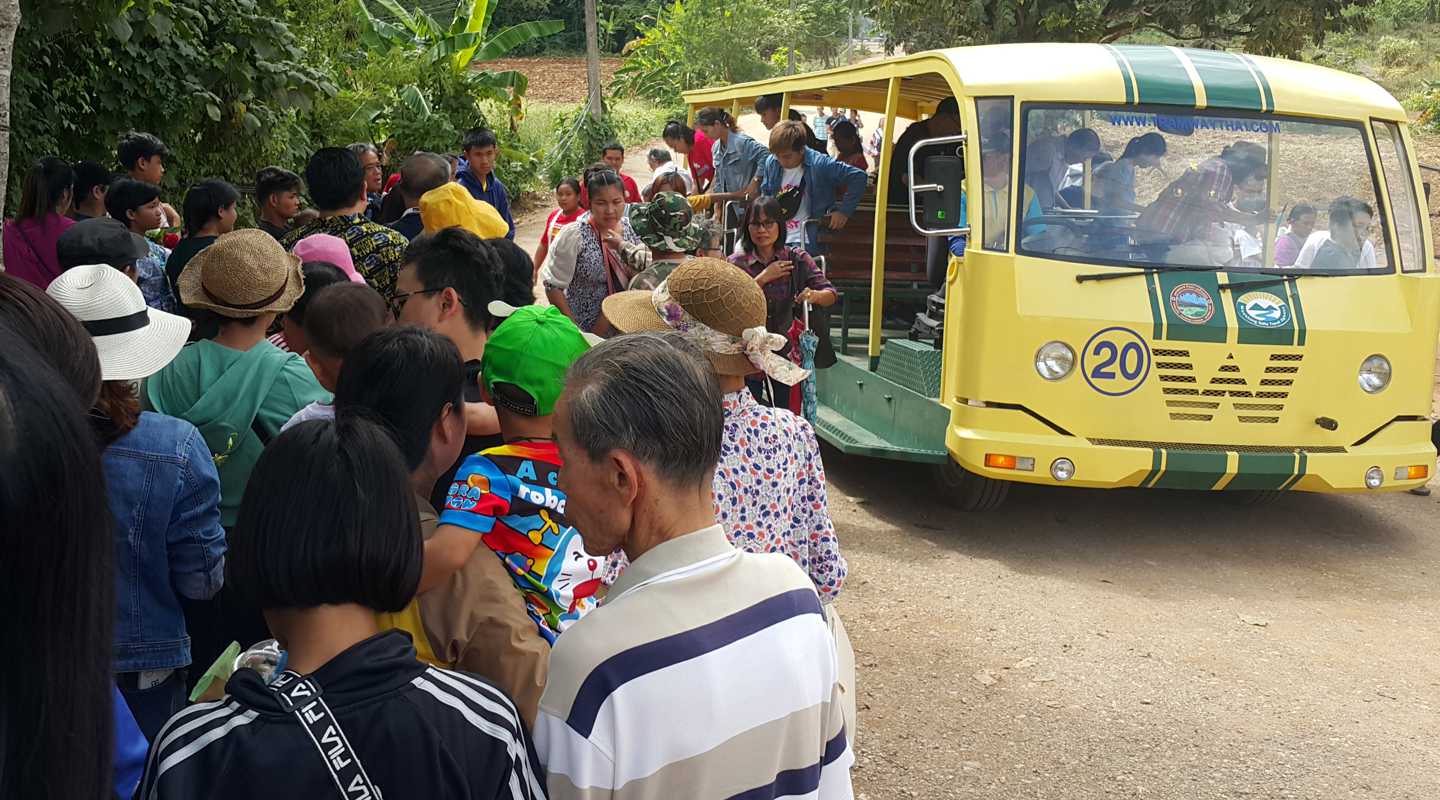 Before we boarded the bus, we grabbed the opportunity to see what the local stallholders were selling. It's fair to say that a whole industry has sprung up thanks to The Wild Boars and their adventures, and a very profitable one on the face of it. Apart from the usual cold drinks and snacks, there were stalls selling all manner of cheap Wild Boar t-shirts and other assorted paraphernalia. There were even a couple of persuasive ladies selling single roses that one could purchase and place near the plinth of Diver Sam's statue.

In this article that appeared in the UK Guardian back in July and commemorates the first anniversary of the cave rescue, one vendor said “It has completely changed my life. Before this I was just selling fruit at the weekend market, but after the cave became famous I set up here instead and since then I make a very good living. It is the same for so many people in my village, we are all very happy. The boys were saved and then we were saved too.”

I stood there watching tourists part with their cash and wondered if the 11 boys and their coach, who were not from the most affluent of backgrounds it must be said, were on some kind of percentage kickback or at least getting a well-deserved share of this sudden economic boom. I somehow doubt it.

With that gloomy thought, we rode the bus to the cave entrance. 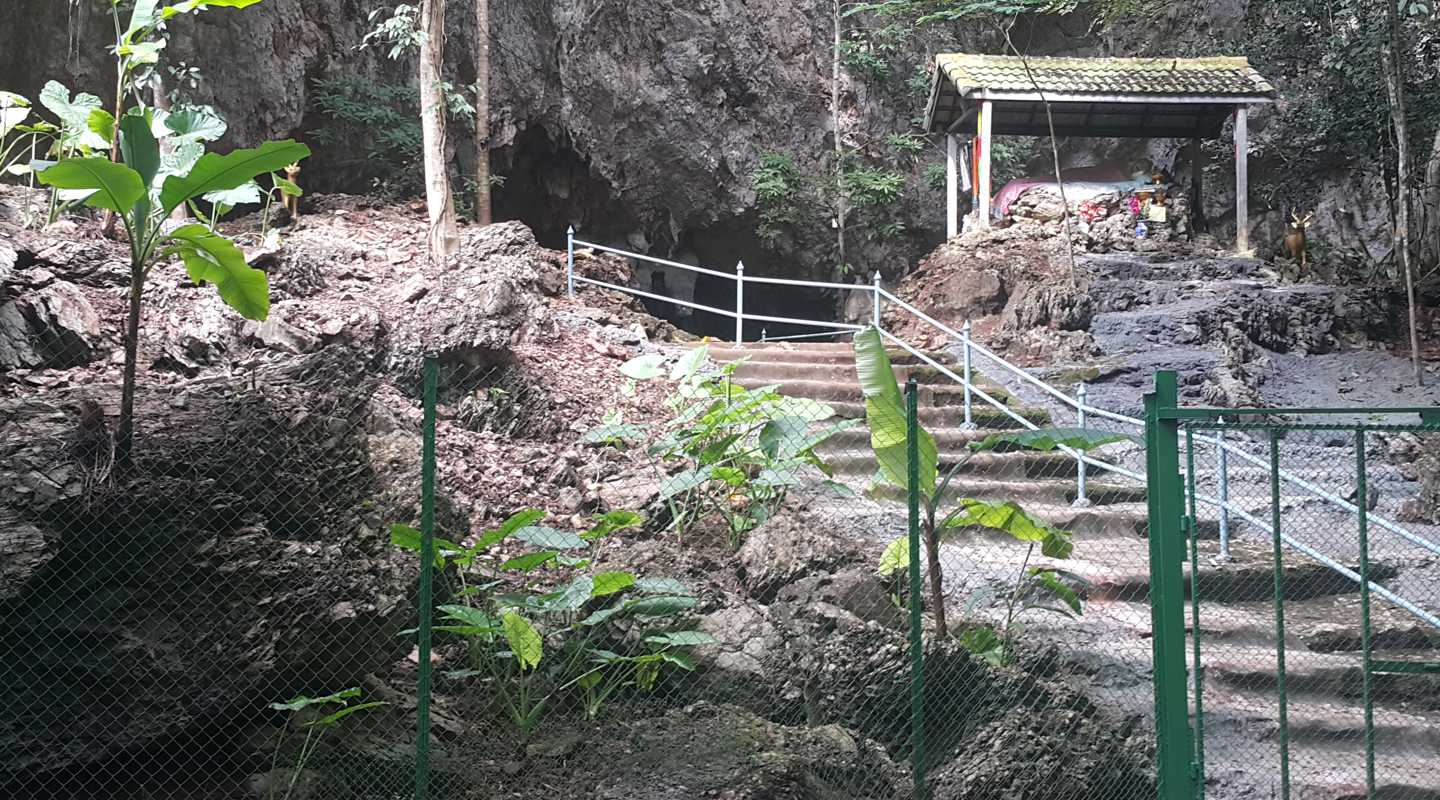 As one would expect, you can't get anywhere near the entrance itself. A wire fence and a padlocked gate keeps visitors well away so you reel off a few obligatory photos of rocky outcrops and cliff faces and the rest is basically left to your imagination. At least you were there I suppose.

From the disappointment of not actually being able to enter the cave and at least retracing the boys' first few steps, you find your spirits lifted by what comes next - the statue of Diver Sam and the Memorial Hall. 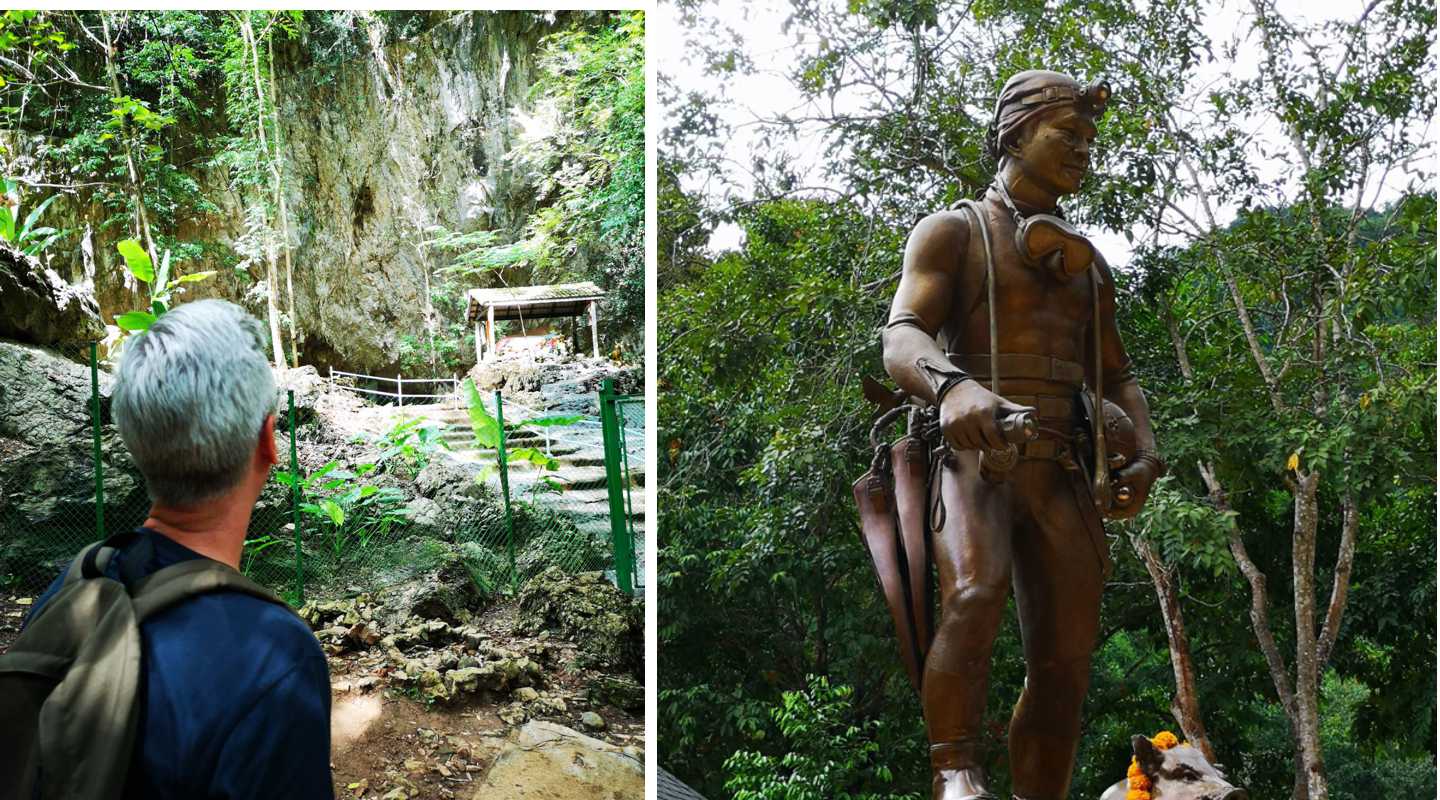 Whilst the boys' rescue flung them into a media spotlight that included appearances on prime-time TV chat shows and had the world's top football clubs falling over themselves to offer the Wild Boars a VIP experience and a chance to meet their soccer heroes, it wasn't a happy ending for everyone. Saman Kunan (Sam), a 37-year-old former navy SEAL, died of asphyxiation whilst delivering supplies of air through the perilous cave network. His was the only fatality of the entire operation. 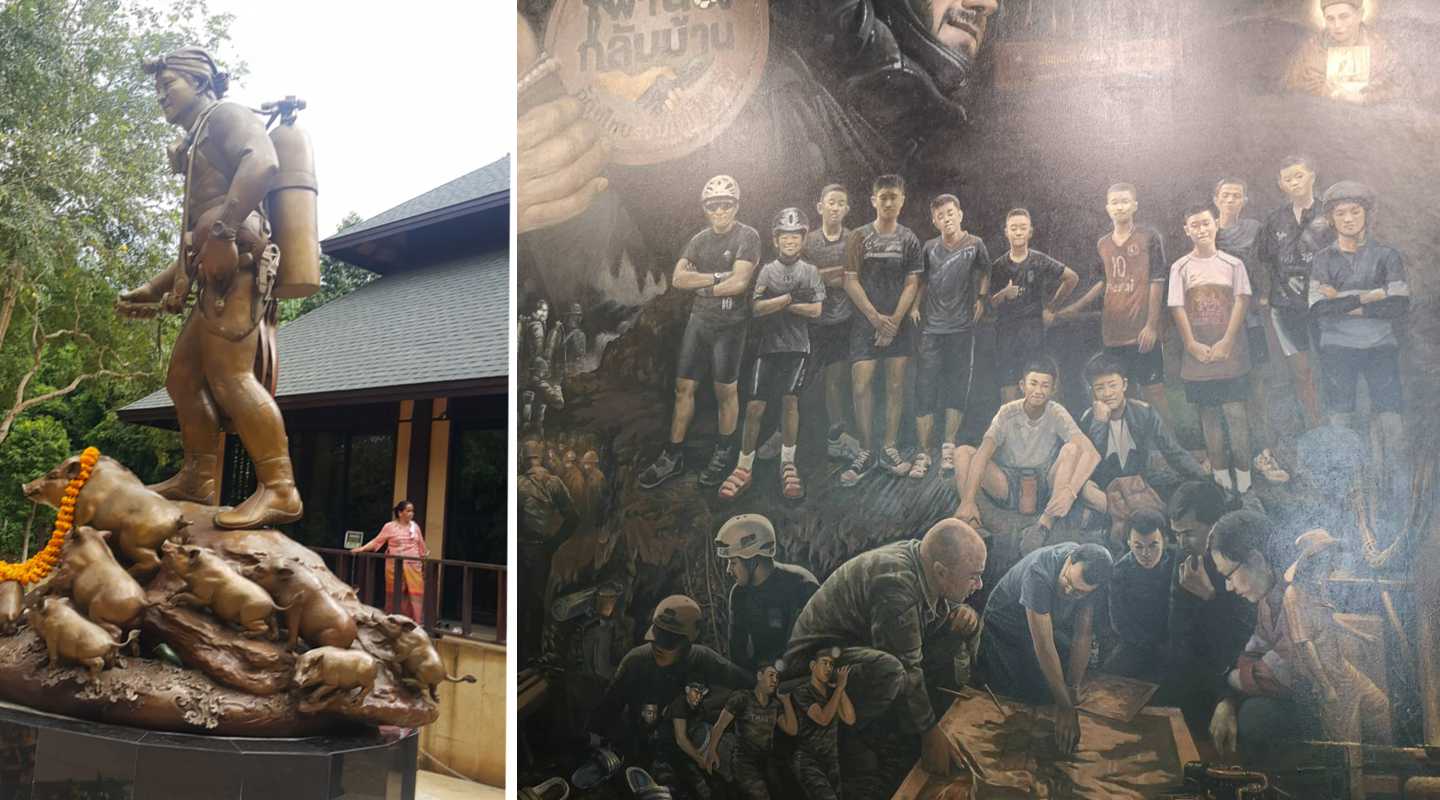 The bronze statue of Sam that stands proudly in front of the memorial hall was for me the highlight. Kitted out in full diving gear and with a pack of wild boars at his feet (the collective noun is actually a 'sounder' but only if there are more than a dozen), I defy anyone not to look up at his smiling face, recall the events of that time and not be moved. What an absolute hero. Rest In Peace Sam. I can't shower enough praise on the Thais for keeping this man's memory alive in such a wonderful way.

The memorial hall (shoes have to be removed before you enter) is dominated by a 14 x 3 metre mural running the entire length of the far wall. The canvas, created by artist Chalermchai Kositpipat, is a breathtaking work of art that tells the story of the cave rescue and pays tribute to all the main characters. Sam takes centre-stage of course but all the foreign diving experts get their space, as well as volunteers, assistants and military personnel (both foreign and Thai) who worked tirelessly around the clock to ensure the boys came out alive.

Standing there in front of the mural, you're reminded that giving up was never an option. 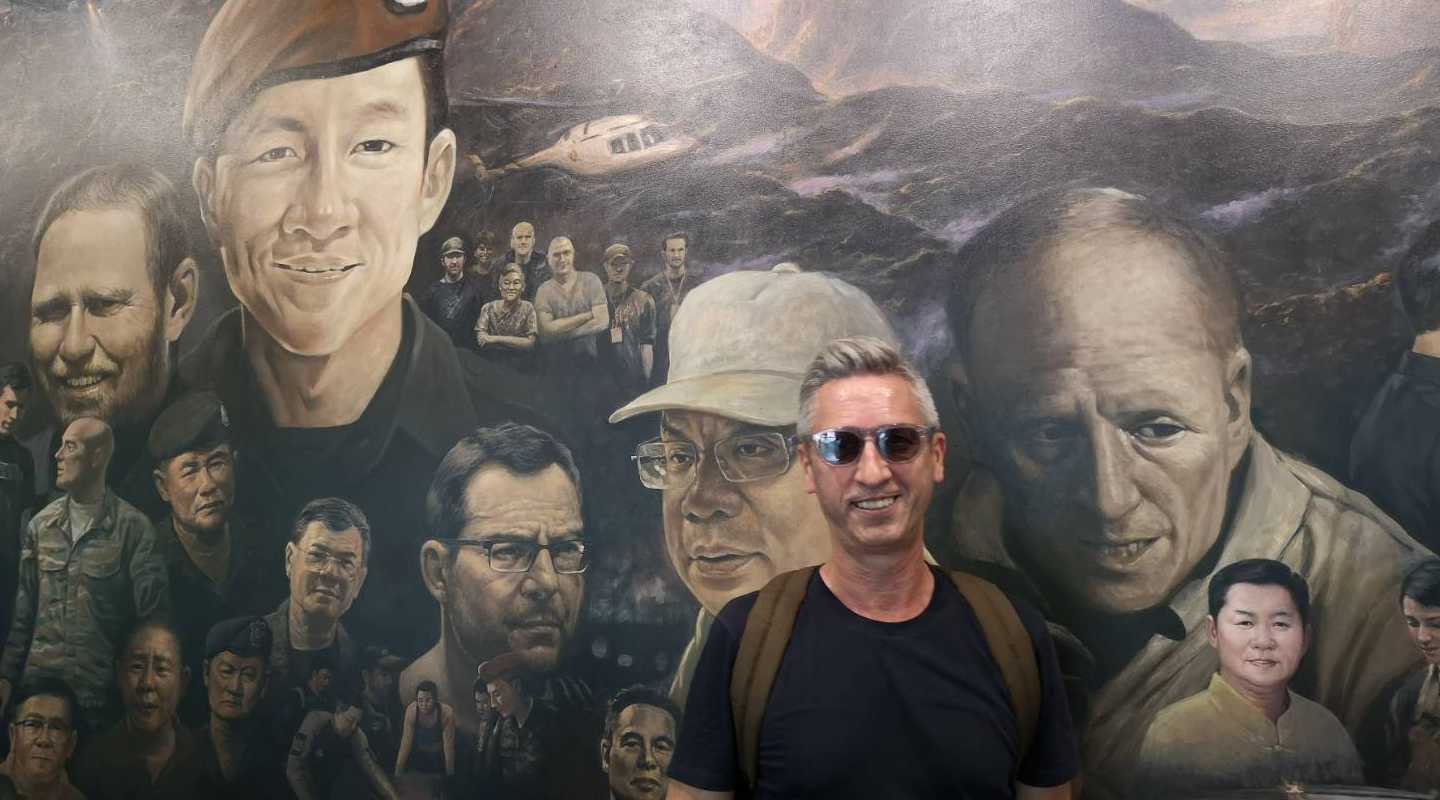 Is there double pricing?